World Premiere. Ah, there’s a phrase to warm a critic’s heart—especially when it’s summertime and local theaters display a depressingly high probability of predictability. Not that there’s anything wrong with buttoning up a Dreamcoat or giving Oscar Madison one more toss of the spaghetti plate, or letting those high school kids do another musical, but a theater scene without new material can stagnate faster than an East End marsh. That’s why it’s heartening to find two brand-new musicals and a new play among the offerings from Long Island playhouses this summer. It seems we can have our wedding (singer) cake and eat it, too.

Likely to get the most attention will be Two Tickets to Paradise, a rock musical featuring songs, old and new, by Levittown high-school grad, Eddie Money. An autobiographical show that will be narrated by its composer, Paradise tells of Money’s decision to leave the New York police department and seek musical fame on the West Coast. Librettist John Blenn, playwright-in-residence at Five Towns College (and whose production company will debut American Dating Catastrophes at Dix Hills PAC just after Paradise), told Billboard he hopes the June staging will be, “the next step towards Broadway. A lot of producers are coming in to look at it.”

I’m the Greatest Star, another musical with Broadway aspirations, gets its first look at Hofstra this summer. Conceived by Bob Spiotto based on the book by Robert Viagas, the revue recreates the songs, dances and styles of such great Broadway performers as Bernadette Peters, Gwen Verdon, Zero Mostel, Mary Martin, Ethel Merman and George M. Cohan.” Viagas told Pulse, “There is a special luster to the stars of the Broadway stage. They had to do their work in person, night after night, with no TV or Internet. They earned it theater by theater.” He notes that the show, like the book, pays tribute to both still-famous performers and those whose heyday is now “slipping into undeserved twilight. For example, during their time on Broadway, Fred Astaire was the lesser half of a dancing team that included his sister, Adele. She was considered the bigger star.”

At Bay Street, a current star, Mercedes Ruehl, is coming to Dinner. Fresh from her recent turn in Broadway’s The American Plan, the Oscar and Tony-winning actress will appear in Dinner, a new satirical comedy by English playwright Moira Buffini.

Schedules are subject to change, of course, but here’s this year’s Long Island summer lineup as of press time:

Certainly the only musical in history to feature a song titled, “Come Out of the Dumpster,” The Wedding Singer has enjoyed a healthy life after its somewhat disappointing Broadway run. Airport gets the Adam Sandler film-based tuner May 29-June 14, followed by 42nd Street (July 10-26) and Joseph and the Amazing Technicolor Dreamcoat (Aug. 7-23).

BAY STREET THEATRE
Long Wharf, Sag Harbor. (631) 725-9500. baystreet.org.
East End residents breathed a collective sigh of relief a few months back when Bay Street Theatre was able to sign a new lease and stay in its home. As Mayor Greg Ferraris put it at the time, “Bay Street Theatre provides a social, cultural and economic anchor to the Village of Sag Harbor that is paramount to the success and popularity that the village currently embraces.” It’s hoped that audiences will embrace the venue’s summer lineup, which features a comedy, a dark satire and a musical. Best known for the 1958 film starring Jimmy Stewart, Ernie Kovacs and Kim Novak, Bell, Book and Candle started as a hit play by John Van Druten. Jack Hofsiss, who won a Tony for staging the original Elephant Man, will ring Bay Street’s Bell June 2-28. Dinner with Mercedes Ruehl follows (July 2-Aug. 2), with the musical Dames at Sea coming to shore Aug. 11-Sept. 6. 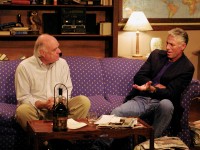 BROADHOLLOW THEATER CO.
Multiple locations. (631) 581-2700. broadhollow.org
Following their winter staging of Maggie’s Getting Married, BroadHollow sets its sights on another Norm Foster comedy, Looking, which arrives at their Studio Theater in Lindenhurst May 30-June 20. High School Musical 2 (or, as the New York Times called it, “The New Testament”) barrels into Islip July 11-Aug. 22, while the underrated Broadway tuner, My Favorite Year, brings a taste of nostalgic Brooklyn to Elmont, May 23-June 7.

DREW THEATER
Guild Hall: 158 Main Street, East Hampton. (631) 324-4050. www.guildhall.org.
Dark for two years during a $14 million renovation, the Drew Theater reopened Memorial Day Weekend with a concert by Liza Minnelli (May 23). Lovers of short stories will want to check out “WordTheater” on June 27 to hear Kate Burton, Sean Young, Samantha Mathis, Andrew McCarthy and other celebs reading Pushcart Press prize-winning stories. July 8-26, veteran Broadway actor Harris Yulin goes behind the curtain to direct Tennessee Williams’ classic study of familial dysfunction, The Glass Menagerie. Most intriguing is a world premiere by avant-garde legend Robert Wilson, slated for Aug. 8-9. Titled KOOL—Dancing in My Mind, the piece explores the choreography of Suzushi Hanayagi, a longtime Wilson collaborator and master of classical Japanese dance. And just to prove that not everything old needs an overhaul, Eli Wallach will appear in a June 21 staged reading of Visiting Mr. Green, a melancholy comedy in which he starred off-Broadway in 1997—back when he was the ripe young age of 81.

GATEWAY PLAYHOUSE
215 South Country Road, Bellport. (631) 286-1133. gatewayplayhouse.com.
It’s an all-musical roster for Gateway, from the bluesy elegance of Ellington to the Euroballads of Boublil to the dipso ditties of the Drowsy Chaperone. Sophisticated Ladies opens the summer at Bellport (May 27-June 13) with a 1981 revue of such Duke Ellington classics as “It Don’t Mean a Thing (If it Ain’t Got That Swing)” and “Mood Indigo.” The Tony-nominated and hilarious Drowsy Chaperone follows (July 29-Aug. 22), with Meshuggah-Nuns!, the fourth (and, I swear to God, not even last) sequel to Dan Goggin’s uber-franchise, Nunsense, dancing in June 17-July 5. At Patchogue, Miss Saigon spins its tale of Vietnam woe July 8-Aug 22, but laughs return, Aug. 26-Sept. 12, with Dirty Rotten Scoundrels, which was beaten out (wrongly, I dare say) by Spamalot for the 2005 Best Musical Tony.

HOFSTRA ENTERTAINMENT
Hofstra University: John Cranford Adams Playhouse. Hofstra.edu.
Now in its 51st year, the John Cranford Adams Playhouse at Hofstra hosts three tuners, including the Billy Joel-based revue, It’s Still Rock and Roll To Me (June 12-14), a show that isn’t Broadway’s Movin’ Out, even though it features original Movin’ Out ensemble member Wade Preston and is backed by the “Movin’ Out” band. Movin’ on, there’s I’m the Greatest Star (July 10-26), with 42nd Street tapping away the season, Aug. 14-30.

JOHN W. ENGEMAN THEATER
250 Main St., Northport.(631) 261-2900. johnwengemantheater.com.
It may not be most novel choice for a summer slot, but Neil Simon’s The Odd Couple (May 7-June 7) is likely to offer surefire laughs, while Crazy for You (June 25-Aug. 16) has proved a durable crowd-pleaser for its silly-fun book and Gershwin stuffed score. 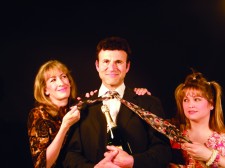 SMITHTOWN CENTER FOR THE PERFORMING ARTS
2 E. Main St., Smithtown. (631) 724-3700. smithtownpac.org.
If you missed I Love You, You’re Perfect, Now Change during its 5001-performance run off-Broadway, Smithtown’s PAC offers another chance (May 16-June 14) to catch Jimmy Roberts and Joe DiPietro’s lighthearted revue about dating and marriage. That’s followed by the well-received off-Broadway tuner, The Great American Trailer Park Musical, July 18-Aug. 30. As a special event in between, composer David Pomeranz, who has provided songs for the likes of Bette Midler and Barry Manilow, will arrive with his show, Charlie Chaplin: A Life. In Concert, July 9-12.

THEATRE BOX
35 Verbena Ave, Floral Park. Theatrebox.org.
For its 30th anniversary, this half-Queens, half-Nassau community theater will feature Oliver! (June 5-13) and The Sunshine Boys (Aug. 6-9), the latter containing what may be Neil Simon’s most profound observation: “Words with a `k’ in it are funny.”