At 26 years old, Casey Hilpert can’t play the youth card. He’s not about to anyway. The Lizards, Long Island’s entry in Major League Lacrosse, are his team. He began in 2006 as a part-time employee and is in his second season as a general manager. Upon his appointment, he was unofficially the youngest GM in professional sports, and he’s worked long, hard hours ever since to ensure that the franchise, now amid its ninth season, has its momentum going forward.

“It’s one of those things where I’m never going to be satisfied until my stadium’s full,” Hilpert said. “We set our goals year after year. There’s so much potential here on Long Island. Until we’ve reached it, me and my staff just aren’t going to rest.”

Between wing-eating contests, face painters, inflatables and rock walls, the pre-game is quite an undercard to the main event—quite literally the country’s top talent going toe to toe. This month, the Lizards will have a league-high 19 players try out for Team USA. A major chunk of that group hails from the Island. In fact, 35 of the 40 invitees to Lizards training camp are home-grown. Farmingdale’s Matt Danowski, formerly of Duke, is one of two winners of the prestigious Tewaaraton Trophy given out annually to the best college player in the country (Matt Ward of Virginia is the other).

“We are the best lacrosse players in the world,” Hilpert said. “That’s where we differ from minor league baseball. It’s a great game and it’s very affordable to come to.”
While pro teams in the city charge hundreds and even thousands of dollars for their premier seats, the Lizards’ most expensive ticket stands in the Volkswagen fan zone at $50 a head. It puts a ticketholder on the sidelines during the game, is fully catered and offers complimentary Bud Lights. Cheaper tickets go for $15 and $20, with family packs (4 tickets, 4 food vouchers) available for $70.

“It’s one of those things where I’m never going to be satisfied until my stadium’s full,”

Hilpert, a college lacrosse player himself at Fairfield, has focused on spreading the word to those in all directions from New York City—Westchester, Hudson Valley, the Island. Determining just how successful the Lizards and the sport has been is a two-sided discussion. On one hand, Long Island averaged a respectable 4,000 fans per game, and the sport has flourished in places like Boston, which drew around 9,000 a night, and Denver, which averaged 13,000 and brought in a league record 20,000 for a game against San Francisco last July. On the other, Major League Lacrosse contracted from 10 teams back to six this season, losing teams in Philadelphia, New Jersey, San Francisco and Los Angeles with the Rochester squad relocating to Toronto. Closer to home, the indoor brand of lacrosse, played by the New York Titans, started on the Island and at Madison Square Garden but has since switched to Newark, NJ.

The reformatting of MLL led to the redistribution of players from the defunct squads and has allowed the Lizards and their opponents to load up on talent. Aside from their talent, Hilpert and his players understand what needs to be done to grow the team and the league. They stay after to sign autographs and take pictures, right until the last person departs. The alternative for the ‘weekend warriors’ – they all have full-time jobs but suit up for the Lizards twice a week—is not playing at all.

“It’s a big challenge but it’s something I looking forward to,” Hilpert said. I wouldn’t be working 12- and 13-hour days if I didn’t something that could be done.” 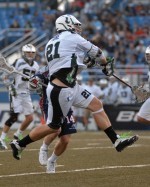