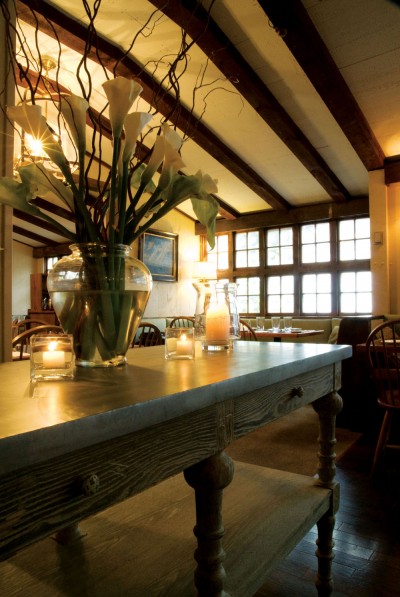 “It’s a bird, it’s a plane, no it’s Superman.” That famous cartoon character’s mantra came to mind recently while eating at the relatively new
Mirabelle Tavern at the Three Village Inn in Stony Brook. It’s French, it’s American, it’s a tavern, a pub, a gastropub, it’s Mirabelle and it’s rather good. Guy Reuge, one of Long Island’s few truly great chefs and his wife Maria, who successfully ran Mirabelle in St. James for twenty-five years, have taken their act on the road and moved it into the historic Three Village Inn. There they operate not one but two Mirabelle’s—the Tavern and the more formal Mirabelle restaurant.
Mr. Reuge, who has won every conceivable culinary award in both Europe and the United States, has taken more than the name Mirabelle with him to his new digs. His skill is evident in nearly every dish and the digs or atmosphere don’t hurt a bit either. The Mirabelle Tavern is a warm, woodsy place with beamed ceilings, a stone fireplace, antique gold-rimmed lantern lighting, bottle-glass windows, plenty of candles, bouquets and china cabinet displays of show plates and kerosene lamps. Think New England/colonial. Its prices are moderate, its bread (sourdough and cornbread) is good and its menu features American and European comfort food. Everything from an all American, outstanding chicken pot pie to a very French beef bourguignon. That menu also offers small plates starting at seven dollars, trilogy plates (all good things come in three) and classic plates or full-sized entrées.
A recent meal began with a basket of stacked, stubby zuchinni fritters and chick pea fries sparked by pimento aioli, homemade garlic sausage that meshes complementary big flavors like bacon, onions and a green lentil ragout, and flammkuchen or a delicate thin crusted, white pizza covered with crème fresh, studded with smoky bacon and capped by a swirl of onions. Perhaps best of all was the organic egg cocotte served in a small, iron casserole. It’s a parmesan cream wonder with an egg yoke at its center, roasted tomato and a side of rustic, grilled bread. Salmon lovers should gravitate to the trilogy plate that features gravlax, pastrami and smoked versions of the fish garnished with cucumber soba salad. There were two minor miscues among the entrées—the tougher than usual sliced steak in the steak frites and four, somewhat chewy, lamb chops that were ordered medium rare and arrived sushi rare. The crabcake was dense with crab meat, not filler, that chicken pot pie was rich and rewarding, and the accompaniments with the tasty lamb chops (eggplant cavier, miso roasted eggplant and preserved lemon caper-gremolata) and with the steak frites (French fries, sauteed garlic spinach and a creative Maxwell’s 1890 sauce) made those dishes worthwhile as well.
The Franco-American meal was topped off with sweets like an intense chocolate mousse cake with chocolate fudge sauce, a noteworthy ginger almond tart, a respectable crème brûlée and sensational profiteroles, fluffy cream puffs stuffed with vanilla ice cream and served with a tiny pitcher of warm chocolate sauce. 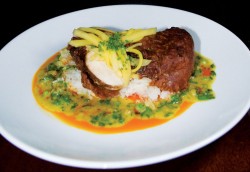 “Any Long Island Restaurant that doesn’t change after five or ten years is making a bad mistake,” so said a veteran and successful local chef/owner. OK, it’s not 100% correct; there are restaurants that are twenty, twenty-five and thirty years old and still much the same as they were on opening day. But there is a great deal of truth in the statement. Obviously the people at Aix en Provence believed it and on February 1st changed their decade-old restaurant with a French name and many Italian dishes into Crew Kitchen & Bar. It’s a change for the better.
Crew is a neat, nifty, nautical nook across the street from Huntington Harbor. This almost waterfront spot is appropriately-decorated in bold blue and white with nautical photos, padded multi-colored seats, a striking sunburst mirror, candle lanterns on each table and drop lighting over the bar. Crew’s crew is much the same as its predecessor. The Hauser’s still own it as well as Barney’s in Nassau County and Gene Defreitas is still the kitchen commander. But the menu bears no resemblance to Aix en Provence. Although not every dish is a home run and the service is sometimes less than silken, Crew goes in the right direction most of the time.
Warm popovers and good crisp rolls launch meals on a positive course. They are followed by soft, plump, baby back ribs with a subtle passion fruit glaze, a fresh watercress salad with noteworthy raspberry vinaigrette and a lively mix of Brie, apples and candied walnuts. Warm, light, comforting steamed buns filled with duck confit and accompanied by thick hoisin sauce and a batch of pickled fennel also scored. Fat, baked, blue point oysters passed muster though their preserved tapioca pearls, leaks and Tasso ham detracted somewhat from the shellfish’s delicate flavor.
Main events included a creative tandoori fried chicken enhanced by its coconut rice and pickled mangos, and heralded by an aromatic whiff from its curry sauce. Good too was a homey open-faced pulled pork pot pie, but it needed more pulled pork and fewer potatoes, parsnips and soy beans to make it a real success. Excellent, flaky wild salmon, cooked medium-rare as it should be, was a better choice and one that was made more interesting by its black rice, delicate shaved celery and porcini mushrooms. A non-traditional tiger prawn and scallop cassoulet should probably walk the plank. Its undercooked beans were harder than they should have been and while its prawn, scallops and sausage were first-class, the dish simply doesn’t mesh. Indeed the ingredients seemed as though they didn’t come together in the cooking, but were assembled just before the serving.
One mediocre and three fine sweets concluded the meal. Although the lemon brioche was a completely undistinguished blob, the smooth lemon grass pana cotta with a chocolate ganache was a revelation, the intense, flowerless chocolate cake is one of the better ones around and the candied, orange custard cake was an airy, light treat.
Crew is a good restaurant with room for improvement. The earnest, agreeable service needs polish. We were asked twice to order dessert after we had already ordered it. The wine list needs to reflect what’s on hand. On a Saturday night, we ordered two white wines, neither of which was available and the dining room could use some sound-proofing, porous material to moderate the ear splitting noise that ricochets off the walls on busy weekend nights. Yet, all of these missteps are easily correctable and don’t materially detract from the fact that Crew is sailing in the right direction.