Love is supposed to be great, exalted and worthy of worship. To me, this is true, but the category “love” is made up of very different emotions, some of which are destructive. We have romantic love, which, when it works, is wonderful. We have filial love, love of ideals and principles, love of the sea or sun or Shakespeare, etc. Each is different. And there is that terrible feeling that some people call love that I see as an addiction. 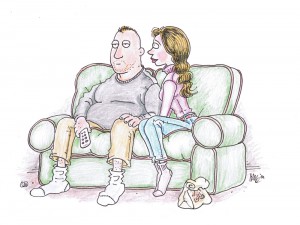 Sandi is a divorced professional woman who was swept off her feet when she met Brad. He was tall, attentive and successful—exactly what she had hoped for after she left her marriage. However, despite the initial rush, he seemed to lose interest. Over time, Brad returned calls erratically and seemed to avoid Sandi, always with a reason that didn’t quite convince her. Sandi was beside herself. Just as with a drug addiction, she couldn’t wait to get her next fix of Brad. When she did, she had a momentary high followed by the down of his being tepid. Although Sandi had no doubt the relationship had no future, she could not stop seeing him—she was addicted. All of her friends said that Brad was not worth the pain and Sandi completely agreed. Yet she could not keep away from Brad. She experienced the withdrawal symptoms of anxiety and depression when she didn’t get her fix. Her cravings shot up when she was reminded of him—when she went to places that they had been together or when she heard a song they had shared. Sandi’s heart jumped when she thought she spotted him or his car. When alone, she was dominated by thoughts of him and she jumped when the phone rang, hoping it was Brad.

Sandi knew that Brad was bad for her. Yet she cried at his aloofness and indifference. She felt she could not live without him. She called her feelings love, even though she knew how bad Brad was for her. The similarities with drug addictions are obvious. Yet, by believing her feelings were those of love, Sandi glorified her painful condition rather than put her misery in a more realistic perspective. As I have said in previous articles, love problems are often more disabling than schizophrenia. And are a hell of a lot more common.

She experienced the withdrawal symptoms of anxiety and depression when she didn’t get her fix.

If Sandi would tell herself that she is addicted, she would address her pain in a different way. Addictions are not easy to eliminate, but total abstinence is generally required. That means rather than go through the highs and lows of seeing Brad, Sandi becomes committed to not cutting Brad off cold turkey. Withdrawal is very difficult, especially in the beginning, but time away from the substance weakens addictions. Sandi must be prepared for withdrawal pangs and must recognize they are part of the process of fighting addiction.

Sandi can hasten her recovery through the use of replacements. When I quit my three-pack-a-day cigarette habit, I found I had to keep my hands busy and I used keys, paper clips and Scotch tape. Sandi needs to keep herself occupied with friends or to be open to meeting new guys.
Later, when Sandi may feel she is getting over Brad, she must also expect periods when, out of nowhere, cravings for him reappear. Pavlov, the great Russian physiologist, called this “spontaneous recovery,” and it is natural and normal.

I continually remind Sandi not to glorify her problem by calling it “love.” Calling this craving an addiction makes it seem, rather than something noble, a self-destructive condition she needs to address.