No summer is complete without at least one trip to The Hamptons where you can se and be seen among, well, the scene. This sampling of social functions, dining and nightlife will remind you why the traffic is worth it. 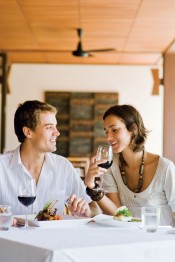 The sleek, sophisticated, Annona, in Westhampton Beach is an elegant, upscale, fine dining spot, with its subdued lighting, waterfall, cool jazz, wall of candles in cubby holes and curved bar. Its outdoor deck provides a contemporary aura similar to that at fashionable East Side restaurants. Add Daniel Ross-Leutwyler and Brian Leth, two creative young chefs, and you have one of the very best restaurants on the Island.
The overall excellence and artfully-presented modern Italian dishes here might come as an unexpected surprise to those diners who have heard Annona is perched atop an auto dealership near the railroad tracks. But take a second look. The restaurant has a quiet, palatial feel and the automobile dealer is Manhattan Motorcars of the Hamptons, more an art gallery filled with $100,000 to $350,000 Lamborghinis, Bentleys, Ferraris and Rolls-Royces than a showroom.
The food, too, is of Rolls Royce quality. It’s full-flavored front of the month fare, created by chefs who aren’t playing it safe, who know how to craft flavor sparks without explosives.
Adventurous eaters will appreciate both the blending of local ingredients with Mediterranean-touched contemporary Italian dishes and the house made breads, pastas, rice, sorbets and gelatos here.

Almoncello, a sophisticated, northern Italian restaurant in East Hampton, is almost as noteworthy for what it’s not as for what it is. It is not a garden-variety pasta and pizza red sauce spot. Instead, executive chef, co-owner Jason Weiner and John O’Connell, his chef de cuisine, turned what was Almondito, a flashy Latino restaurant, into an ambitious destination eating place for the East End fooderati.
Those in an adventurous mood will no doubt target the likes of scallop carpaccio and pomegranate grapefruit granita, crisp leeks and artisinal olive oil as well as short ribs goulash with escarole, polenta and smoked paprika.
Owned by Eric Lemonides and Jason Weiner, the same partners who operate the deservedly-popular Almond French Bistro in Bridgehampton, Almoncello is smaller and cozier than its predecessor. Its fireplace, candles, well-spaced paper over cloth tables, wall of wine and rows of wine bottles on shelves over its windows make it a mellow milieu. Welcome too is an attitude without an overanxious effort to impress. There’s no pretense at this former VFW Hall that has housed many a restaurant prior to the present occupant. Fortunately at this one, the kitchen never upstages the quality ingredients it uses.