When “The Sport of Kings” comes to Saratoga Springs every summer, it brings horse racing enthusiasts and seasonal revelers from near and far to this quaint and historic locale just north of Albany. Fortunately, Saratoga has been welcoming visitors for well over a century and knows how to show them a good time. This is evident in the Visitors Center, which has a wealth of information about the doings around town. 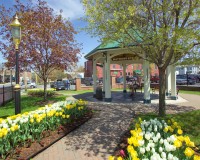 Officially established in the mid-1800s, Saratoga has a proliferation of natural springs whose mineral waters are reputed to possess medicinal properties. That said, spas come in all shapes and sizes here, from the venerable Roosevelt Baths in Saratoga Spa State Park (where you can immerse yourself in a private mineral bath for just $15) to the Sanctuary Spa, the Crystal Spa and more.

Broadway is the main drag through town and this Hamptons-style boulevard boasts a plethora of trendy shops, eateries, inns and pubs. There is plenty of shopping, from antiques and local “tchotchkes” to designer boutiques. Culinary choices run the gamut from pub grub to elegant dining. Some local favorites include Olde Bryan Inn, originally established in 1773 (though the menu has been upgraded, try the French onion soup), Hattie’s, whose chef Jasper Alexander won a fried chicken “throwdown” against Bobby Flay, Chianti for Northern Italian, the funky Grey Gelding Bistro & Bar and Brindisi’s, where you can sip their award-winning martini. For a casual breakfast, visit the Country Corner Café. Their superb homemade preserves on thick sliced bread will set the tone for the day.

From July 29th through Labor Day, the racing season takes center stage in Saratoga. The 350-acre Saratoga Race Course is the oldest continually-operated thoroughbred track in the US and has something for all ages. In addition to first-class racing (held daily except Tuesdays), visitors can picnic in the spacious backyard grounds or enjoy an early morning buffet breakfast while watching the horses work out.

While hoping to spot the next Seabiscuit, you can choose from many tiers of food and drink at the Race Course. Note: The running of the $1 million Travers Stakes is August 29, 2009 and the party starts the week before. For all-season gaming, visit the Saratoga Gaming and Raceway, which has over 1,700 slot machines, live harness racing and the multi-level “Vapor” nightclub.

Accommodations come in all shapes and sizes from charming country inns to amenity-laden major chains. The Saratoga Hilton (thesaratogahilton.com) offers comfortable, well-appointed rooms, fine dining and is conveniently located on Broadway. Also on Broadway are the venerable Adelphi Hotel (adelphihotel.com) circa 1877, and the Saratoga Arms (saratogaarms.com), a “concierge hotel.”

Saratoga also offers an active arts and cultural season, with numerous festivals and special performances at the Saratoga Performing Arts Center (spac.org), including the Philadelphia Orchestra, which is in town from August 5-22. SPAC is a one of the favorite spots in the northeast for concert-goers and always has a great lineup. This summer is no different with Coldplay (July 27), Crosby, Stills and Nash (July 28), Phish (August 16), Allman Brothers (August 18) and many more. For information on events, dining, accommodations, spas and deals, visit saratoga.org.

The comeback kid of ocean resorts, Atlantic City has been a seaside destination for over 120 years. When the casinos arrived in the late 1970s, it reinvented itself as a gambling mecca. Though casino hotels still dominate the scene, the “always turned on” Atlantic City now provides added pizzazz, with boutique shopping, fine dining, world-class spas and more.

The famous boardwalk, started in 1870 to keep the sand out of grand hotel lobbies, is a four-mile feast for the senses. Here, delightfully retro “Jersey Shore” staples such as salt water taffy shops, skee ball arcades and psychic readers share space with new, upscale establishments.

The $175 million Pier Shops at Caesars is a high-end retail shopping emporium sitting over the ocean waves with everything from Tiffany’s and Gucci to Armani and Baccarat. It also has the best view from any Starbucks you are likely to sip a latte in. For something stronger than a latte, try the $5 Friday night “Happier Hour” cocktails at participating restaurants including Buddakan and The Continental. Other new shopping/entertainment venues include The Quarter, inside the Tropicana (tropicana.net), and The Walk, a $76 million off-the-boardwalk multi-block compilation of shops and eateries.

Recent hotel expansions include the $250 million Chairman Tower at Trump Taj Mahal (trumptaj.com), which boasts spacious ocean view rooms. Note: While at Trump, treat yourself to an exquisite dinner at Il Mulino, a superb dining experience. Meanwhile, The Chelsea Hotel (thechelsea-ac.com) is the first non-gaming “boutique” hotel on the Boardwalk since the 1960s. Dripping in retro-chic, it offers a 1940s-style steakhouse/supper club, outdoor pool with cabanas and a happening scene.

In the marina section of town, the elegant and subdued Water Club (thewaterclubhotel.com) is a gorgeous new $400 million “signature hotel” by Borgata. It emphasizes R&R so there is no casino, but the indoor walkway to The Borgata Hotel (theborgata.com) leads to plenty of gaming action. While in the marina area, don’t miss an opportunity to make a splash at The Pool, Harrah’s (harrahs.com) glass-enclosed year-round tropical paradise with a funky 50-seat bar.

Full-service spas have arrived in Atlantic City, so prepare for some serious pampering. The new and luscious organic seaweed skincare treatment at the Roman-themed Qua Baths and Spa at Caesars (caesarsac.com) is highly recommended as are The Red Door Spa at Harrah’s, the Spa at the Taj and the ethereal Immersion Spa at the Water Club. 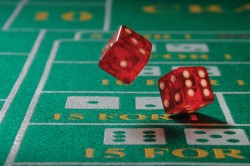 No longer just the buffet capital of the northeast (though you can still gorge at plenty of groaning boards), the city has attracted major culinary talent. This includes Bobby Flay and Wolfgang Puck, both with restaurants in The Borgata. If you want something less grand, try “the best submarine sandwich on the Jersey Shore” at the venerable White House Sub Shop. Note: You’ll also find plenty of funnel cakes, fudge and delightfully gooey Philly cheese steaks all over town.

Last, but not least, there is the magnificent beach, which comes alive with revelers and sun worshipers during the summer. In between gaming, dining, shopping and pampering, I suggest you cozy down to a beach front tiki hut to drink in some true “thalasso” therapy.

For information on summer deals and events, visit atlanticcitynj.com. If you want to leave the car at home, try ACES (acestrain.com), the new direct train service from Penn Station or Classic Coach Buses (classictrans.com) from Long Island.