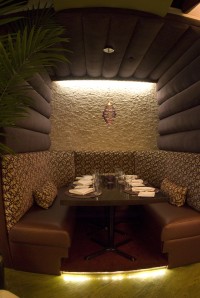 Speranza means hope in Italian and the owners of a flamboyant new restaurant by that name have every reason to be hopeful. This unapologetically over-the-top spot aimed squarely at Woodbury’s many 30 and 40 something foodies has assembled an all star team. Michael Meehan, a master chef, is the kitchen commander assisted by sous chef Anthony Trobiano, and Dennis Borysowski is the General Manager. Mr. Meehan who has hit home runs in kitchens all over Nassau and Suffolk proves he can cook Italian food as well as seafood, steaks, contemporary American, Latino and who-knows-what dishes. Mr. Trobiano ran his own Italian restaurant in Nassau and has a strong background in that cuisine. Mr. Borysowski is a smooth, sophisticated veteran of the Manhattan restaurant wars from nearby Melville.

From the get-go, Speranza says Las Vegas, South Beach, today, hip, 21st century. Even before diners enter, there’s a large HD television screen inserted into the outside wall next to the entrance for the entertainment of incoming and outgoing patrons. Once inside, newcomers are greeted by a rotating turntable dessert display and a dramatic dining room that features a curved wall of wine, back-lit wall-size pictures and an undulating fabric ceiling. Upright knives and gracefully shaped water glasses are on the tables and I’m told the ladies room features bidets and controls for everything from water pressure to toilet seat temperature.

The lush lounge has a wood burning oven used for pizzas and fish, HD televisions and a dance floor. You get the idea. Speranza is a luxurious pre-recession kind of place. Prior to ordering, diners receive marinated black olives, a minced eggplant spread, olive oil, an interesting bread basket featuring warm, tomato-studded focaccia and a layered amuse of baby artichokes, Pecorino cheese and prosciutto di Parma.

Openers to remember: The meaty, browned, pan-roasted quail with a crisp polenta cake; the fresh, pristine jumbo shrimp cocktail; velvety Montauk crudo and splendid shellfish salad (all three can be combined for $19); and a nightly special of fried Zucchini blossoms stuffed with goat cheese and garlic. A half portion of toasted cavatelli, alive with shrimp, Prosciutto, cipollini and vibrant tomato is also a recommended appetizer.

Think fish at entrée time. Delicate, delicious halibut is enhanced by its sherry lobster sauce. A special of pan-seared grouper gets a boost from its yellow pepper coulis. Gargantuan pan-roasted shrimp meld with their herb salad, pepernaota and Pinot Grigio plate mates. Nor is there anything wrong with the traditional chicken scaloppini with a welcome fennel, avocado, red onion salad.

The baked Alaska is the best of a good, if predictable, batch of desserts.

Overall, Speranza’s food is both faithfully Italian and at times mildly surprising. The restaurant’s slogan “sumptuous, sensuous, stylish” is accurate yet the word expensive is equally appropriate. The tab for four with a bottle of wine can easily run in the $300 to $400 range. 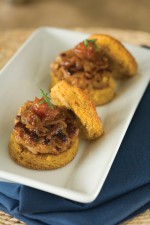 This year, the upscale digs that formerly housed the rather tired Lighthouse Grill now hold the Gulf Coast Kitchen, a restaurant that features dishes and ingredients from Louisiana, Texas, the Florida Keys, Cuba and Mexico. Often, though not always, Executive Chef Michael Domitrovich turns out reasonably authentic fare. Although it’s sometimes a bit difficult to make the Gulf Coast connection (the tender, medium-rare filet mignon for instance was terrific, but not at all unique to the Gulf Coast), most of the food here is flavorful and interesting. It’s also expensive with no appetizer priced below $13, entrées that top out at $49 with only two choices under $32 and $10 desserts. The wine list also occupies the upper price regions. On the other side of the monetary ledger are the complementary sweet potato biscuits, which are airy, light and tasty, but if you want a second one you might have to ask for it—we did.

Diners who begin dinner with the fried Oysters Rockefeller won’t be disappointed. The three shells contain three oysters each and the New Orleans specialty is given some welcome crunch by a sprinkling of wispy, crisp shallots. Even better were the so called “mini” lobster rolls—two soft, hot dog rolls absolutely packed with fresh, no-filler lobster meat that at $19 were a good buy generous enough to feed three or four. Less memorable were the strong tasting crab cakes topped with lobster salad, and ordinary mini shrimp and crab empanadas with a noteworthy chipolte dipping sauce.

Among the main events were four respectable sea scallops gussied up with salsa verde, salso rosa, hominy grits and chayote slaw, and a paella Cubana harboring plump, jumbo shrimp that wasn’t much different than a traditional paella. A double duck etoufee or Cajun stew that would have been a bit better with more sharp and zing yielded a substantial helping of braised Long Island duck, very few chunks of savory duck sausage and a ton of pecan rice.

Aside from a blah, ill-conceived key lime pie parfait, the desserts here ended the meal with a flourish. The Florida Sunshine cake, actually a pound cake soaked in citrus syrup garnished with berries and cream was a pleasing tropical concoction. The often seen brownie sundae with chocolate sauce was given two unique twists by its salted caramel ice cream and what tasted like a smattering of cayenne pepper. It was both chocolaty and spicy at the same time. The turtle tart or dulce de leche with chocolate ganache and chocolate short crust was a rich, rewarding sweet.