As a student at City College, I lived with my parents in the Bronx even though I, like most of us, worked at night. I was an army veteran, and several friends could not understand why I didn’t get my own apartment and become independent. They struggled financially but felt it was well worth it. I laughed. Independence is not a function of who we live with; independence is a state of mind.

Having spent over a year in Germany as an enlisted man, I didn’t have to declare my independence to anyone. Clearly, living at home compromised my meager love life, but it allowed me to contribute to the household and save money for graduate school. Independence is not needing anyone. We may want help, we may want companionship, we may want assistance, but we know that we are capable of handling life’s relentless problems by ourselves. 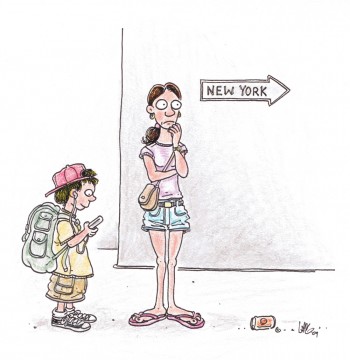 To me, a prime goal for parents is to raise children who are self-reliant and independent. Yet, in therapy, I see parents who, without realizing it, encourage dependency. They transmit their fears by overprotecting their children. Gene, a sixteen-year-old youngster, was feuding with his parents about whether he could go to a rock concert. His parents were legitimately concerned about drugs, driving and physical harm. Although these were real risks, transmitting their fears had other risks—the risks to self-reliance. Their 22-year-old daughter, who had been quite overprotected, was afraid of taking the LIRR to New York City. There are risks of too much safety. The over protectiveness of these parents was more to decrease their own anxieties, as well as protect their youngsters.

Parents also may create dependency by preventing their youngsters from failing. Fearful of bad grades, many parents do the bulk of the work for their children’s reports. When their youngsters have difficult problems, the parents work them out, rather than encouraging the children to tackle the problems themselves. This includes handling social conflicts and also intervening when there are conflicts with the teacher. Certainly, encouragement and support are vital, but too much intervention prevents youngsters from feeling that good sense of achievement. Without parental help, many of these youngsters are overwhelmed in college. I have even seen elderly patients who are still dependent upon their deceased parents.

Among the most painful clients to see are those made dependent by marriage. One spouse, usually the wife, can’t negotiate finances, the TV or the computer because the spouse “protected” her. Marie, a 66-year-old widow, was brought in by her grown children because she had been crying for more than a year since her husband, John, died. Her coping skill that worked for 47 years was to say “I can’t.” John “helped” her by doing all the finances and by driving her to shopping, inadvertently preventing Marie from learning skills other than saying, “Help me.” Now she was driving her kids nuts. Because of John’s help, Marie felt entirely helpless and was dependent upon her children. I worked with Marie’s children, much as I do with parents, to teach them not to get frustrated at Marie, but to encourage her to develop skills.

Feeling independent is itself dependent upon having developed coping skills. These skills of self-sufficiency are learned with opportunity and practice. In order to be able to declare independence, we must demonstrate our skills. As parents and partners, the easy way often is to do things for other people. The side effect is that we may be preventing people from declaring independence.