Ever since Neil Young released his first career retrospective, Decade, in 1977, he has been threatening to put out a multi-volume set of archives that would include enough rarities to make any collector’s head spin. There have been reports for years that a set was imminent. Fans were teased with revelations of demos, lost songs, complete unreleased albums of the music of such Young band’s as Buffalo Springfield; Crosby, Stills, Nash and Young; and Crazy Horse. Dribs and drabs have surfaced through the years and Young has recently been issuing single discs of unreleased concerts confusingly also under the Archives series banner, including Live At The Fillmore East With Crazy Horse from 1970, Live at Massey Hall 1971, and Sugar Mountain – Live at Canterbury House 1968. The promised The Archives, Vol. 1. 1963-1972 was scheduled for official release several times, only to be canceled. Now, the wait is over and the official set is now available on CD, DVD and Blu-Ray.

The set includes 20 hours of music and, in the case of the DVD and Blu-Ray, videos, films, radio interviews, liner notes, memorabilia, photos, timelines and more. It is easily the most ambitious archival retrospective ever to be released. From an aesthetic, technological and even cultural standpoint, nothing issued thus far in the pop or rock canon can even come close. Released through Reprise Records, it was a collaboration of Young’s Shakey Pictures film and archive team. Longtime Young collaborator, film director Larry “L.A.” Johnson conceived the set with Young. It’s safe to say that they have been unintentionally working on this 10-disc set since they first met at the Woodstock concert in 1969. Young was there performing with Crosby, Stills, Nash & Young, and Johnson, along with Marty Scorsese and Scorsese’s longtime film editor Thelma Schoonmaker, was at the festival as part of Woodstock film director Michael Wadleigh’s film crew. Johnson has worked on just about every Young film-related project since Woodstock. He has also found time to work with Scorsese on The Last Waltz, with Bob Dylan on Renaldo & Clara, with Jonathan Demme on two films and on many other film projects. He was part of the seminal New York film scene that centered around NYU in the 1960’s, which also included the aforementioned Scorsese and Schoonmaker. 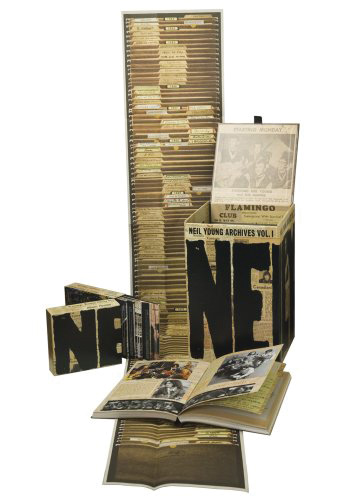 After spending some time talking to Johnson, it’s easy to see how he has been part of Young’s inner circle for so long. The no-nonsense filmmaker is passionate about what he does and about music, yet he has a great sense of humor and, unlike some in the film world, has no pretensions at all. Like Young, he is particularly thrilled with the Blu-Ray version of the Archives. The sound and picture quality of the Blu-Ray, along with the versatile menu navigation, is both a technological marvel and an immersive musical experience. “It’s like the old days of buying a vinyl album and looking at the album art,” began Johnson. “You sort of lose that with CD’s and certainly lose that with I-Tunes and MP3’s.” The emergence of DVD audio and Blu-Ray is what finally prompted Young to put the set out now. The audio and video of Blu-Ray is far superior to standard CD’s, which Young has never liked. The DVD and Blu-Ray standard employed by Young is better than standard movies on DVD with DTS or Dolby, and all the music was mastered from the original stereo masters. Johnson also indicated, “We kept it as pure of a line as we could get.” Johnson talked about Young’s enthusiasm for this project and just about anything he does. “He has a hands-on interest in everything. He edits, remixes, and invents. Process for him is as important as the finished product.”

Sifting through the mountain of material available to come up with the final product was not easy for Young, as Johnson explained. “It’s a process of discovery for him and sometimes it’s a delightful one and sometimes it’s a painful one, but it’s always an emotional process to go through for him.”

As close as Johnson had been to Young all these years, his first encounter with him at Woodstock was not a happy one. “Neil wouldn’t let us film him at Woodstock. He didn’t want to be filmed. He thought it was an over-the-top commercial kind of thing,” Johnson stated.

Another recent project that Johnson worked on with Young was the CSNY film Deja Vu of their Freedom of Speech tour on the eve of the 2008 election during the height of the fluctuating emotions on the war in Iraq. Johnson became highly emotional when discussing the film and proudly stated, “That’s a real document for the future. I’m really proud of that film. It’s one of the best films I ever worked on. We worked really hard on that film.” Johnson indicated that a good deal of the concert performances in the film were taken from the Jones Beach stop on the tour, since it was one of the best shows of the tour. Johnson talked about the interplay during that tour between Young and Stills and their complicated relationship in general. “When Neil and Stephen are in sync, that’s what makes it happen because Neil and Stephen are brothers and when they trade off of each other, there’s nothing better.”

Fans, critics and even the myriad of Young musical collaborators over the years have tried to understand the mercurial musician. Johnson stated, “He’s always writing. He’s got his muse that’s lurking in the background somewhere and then all of a sudden we’re in the studio and there are 12 songs – that’s how it works. Neil loves to write and he loves to play. It’s what he does.” Johnson said that on Young’s passport his occupation is listed as “wordsmith.” He also said that Young is an “inventor, architect, car mechanic, and model train mechanic – and he drives me crazy. There’s a lot going on all the time.”

We could have spent the entire afternoon just talking about Johnson’s work on the Archives and his association with Neil Young, but fortunately Johnson also briefly touched on his work on The Last Waltz and Renaldo and Clara. Johnson was recently interviewed by a person connected with Dylan who is obviously working on a DVD release of the long-unscreened Renaldo and Clara. Johnson said he enjoyed working with Dylan because they share the same film approach. “Because Bob is so beatnik,” he remarked, “there’s a certain get-in, get-it-dirty, get-it-real, get-it-now kind of attitude. Dylan also picked up on that cinema-verite style and understands it.” As for Johnson’s work on The Last Waltz, in which both Young and Dylan appeared, and his working again with Scorsese, he said, “We had done Woodstock together. It (The Last Waltz) was a difficult shoot, but a successful one.” The Last Waltz is often considered the best film on rock music ever made. Johnson also spoke highly of Jonathan Demme, with whom he worked on Heart of Gold and the yet-to-be-released The Trunk Show, another concert film of Young. “He’s great to work with,” he stated. “He’s very, very musical and he enjoys it.”

As our conversation wound down, Johnson was enjoying talking about the completed archives and stated officially for the first time that the Shakey Pictures crew had begun working on the next installment, which would be the second of a series that could be three or more when it’s done, the day before. He said the motto of the small film company is “quality whether you want it or not.” He laughed and then concluded, “You can’t fake the funk. We’ll put the funk on the screen.”