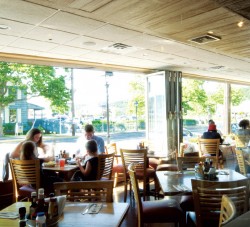 I liked The Catch, a new seafood restaurant in Port Jefferson. You might not. If you are a genteel, dainty diner looking for white glove service, sophistication and quietude, The Catch is probably not your kettle of fish. But if you want an upbeat, seaside, seafood spot with open-air eating, water views and a menu studded with chowders, soft shell crabs, lobsters and lobster rolls, steamers, French fries, corn on the cob, cole slaw and big gooey desserts, this place is for you.

The Catch, with its upstairs open deck, picnic tables, palm plants, airy sidewalk level porch, lobster tank, dessert display and views of Port Jeff Harbor and its ferries coming and going to Connecticut, says summer. But don’t expect one of the pleasant, obliging young servers to be a polished professional who knows who ordered each dish and provides impeccable wine service. And yes, those picnic tables offer cramped seating, the music can be too loud and the upstairs (there are large indoor dining rooms) service can be very slow. But the shrimp cocktail for $10 yields six jumbos, the husky gazpacho is dense with vegetables and crabmeat, the fried soft shell crabs are tender, tasty and lightly battered, the Atlantic Cod filet crowned with black olives and tomatoes is a lively, flaky treat, and the colossal lobster roll, packed and stacked with no filler lobster meat is a lollapalooza and a bargain for $14.

When the weather cooperates, choose one of the long, shaded tables on the deck. And if the first course takes a long time to arrive, relax, it’s usually worth the wait. Montauk tuna tataki, for a modest $2, was fresh and fine, and a pound of steamers of all sizes is a good center-of-the-table starter for four. Aside from the generous shrimp cocktail and substantial bowl of gazpacho, we sampled a New England clam chowder. It was disappointing, gloppy rather than creamy and tasting more of corn than clams (there was only one in the bowl). Speaking of corn, the (Florida?) corn on the cob here, though not local (we visited in June) was unexpectedly sweet, soft and luscious. Other noteworthy sides were the hefty steak fries and broad cut cole slaw that accompanied many dishes. 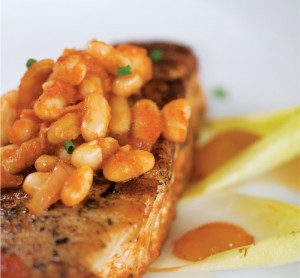 The exemplary Dayboat sea scallops generate a delicate taste of the sea, yet the lobster roll that well might be the best version available on the Island was the star of the show. Its heavy pile of lobster meat overwhelms and nearly obliterates the roll it covers.

The Catch is an honest restaurant without pyrotechnics specializing in straightforward, rustic, American seafood most of which is quite good. That includes the often king-sized desserts. Try the brownie hot fudge sundae topped with sturdy house made marshmallow strips and anchored by the brownie with chocolate ice cream in between, the respectable, warm blueberry bread pudding (that could use a few more berries), the rich chocolate chip banana cream pie cradled in a chocolate cook crust and the molten dark chocolate cake. The latter has become a cliché sweet but the Catch’s luscious version illustrates why it’s on so many Island menus. 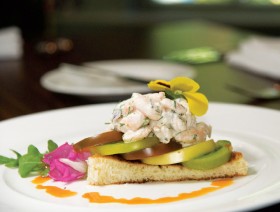 The Maidstone in East Hampton has always been a classy country inn and under its new owners, C/O Hotels, it still is. Now its dining room, called The Living Room, has been given a slight Swedish spin by its Scandinavian proprietors and a slow food outlook by James Carpenter, its Executive Chef.

It would be over critical to quote the oft-heard comment “but you can’t eat the walls” because most of the refined food here is good. Nevertheless, there’s a kernel of truth in the observation for the surroundings seem to promise a smidgen more than the waitstaff and kitchen sometimes deliver.

Our dinners started out well with three varieties of chewy, crusty breads but only two tiny dabs of butter for four people (when we requested more, we received one additional dab). A substantial, creative, mixed salad featuring roasted beets and Valencia oranges, with pine nuts, fennel and noteworthy Mecox Bay Dairy cheese, turned out to be a very good idea as did a velvety, creamy-rich sauté of in-season forest mushrooms on a toasted brioche. But the lobster soup of the day tasted strong and fishy. Much better was the small Scandinavian inspired toast Skagen, a mélange of tender baby shrimp, large pieces of lobster, chopped dill dressing and chives on a warm toasted broche (if you like lobster rolls you’ll love this). Appetizers are priced between $9 and $18.

Among the enjoyable entrées ($24 to $36) was a hearty, healthful tangle of homemade pasta, shitake and chanterelle mushrooms, very sweet peas, pearl onions and shaved pecorino cheese, a towering, hefty Berkshire pork chop sporting a delectable maple-soy glaze with plate mates like baby carrots, roasted fennel, potato puree and apple compote and fresh, grilled Norwegian salmon festooned with fresh herbs from the restaurant’s garden and accompanied by soft crushed new potatoes, fennel and endive confit and ruby red grapefruit caper sauce (vegetables here come from the nearby Satur Farms). The much anticipated and scrumptious sounding pan-fired gravlax presented with local catapano goat cheese, baby organic greens, roasted beets and an artichoke cream would have been a great dish had the salmon cured in a salt-sugar-dill mixture been of the fresh, paper-thin variety but the chunks in the dish we received delivered a strong, overpowering taste.

Two tiny sweets and two good sized ones proved to be fine finales. The first two, a chocolate trio ($9) offered a bite or two of chocolate Mandarin sorbet, a small cup of Mocha mousse and a commendable deeply flavored chocolate hazelnut tart. Another tiny treat was the wedge of sweet goat cheese tart with a touch of ligonberry sorbet. Larger and better were the melt-in-the-mouth warm lemon pudding cake with its blueberry compote and best of all an exemplary strawberry rhubarb crisp with ginger streusel and a scoop of welcome vanilla ice cream on the plus side. 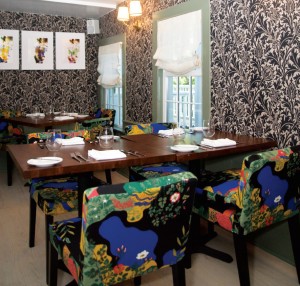 Terms like local, sustainable, organic, humane, reusable and environmentally sensitive accurately describe the Living Room’s ingredients. Yet the waitstaff at an upscale, high end emporium like this should be taught to know who ordered what dish, not to clear dishes while some diners are still eating and to clean the table between courses.