A VACATION IN ZIMBABWE? Survey the media on any given day and horrible news about the country formerly called Rhodesia ignites—here’s what you’re not hearing.

I’ve met a thousand very wise lifetime travelers with unofficial PhDs in globetrotting—and not one of them worked for the State Department. Who are these State Department folks making up most people’s minds about where it’s safe for Americans to travel? Hang in there—the heavy ideas come first. I’ve tackled this issue before and still disagree that traveling in countries run by wicked governments, like Myanmar or Cuba, is irresponsible because the money spent by vacationers only reinforces a dictatorship. A recurring goal of travel journalism should be challenging and disproving erroneous US State Department blanket travel warnings about the world’s no-go zones. I’ve made challenging such warnings a tradition, because it’s wrong to let paranoid bureaucratic generalizations eliminate tourism cash injections where they’re needed most. 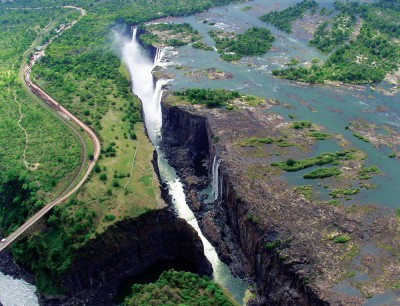 Zimbabwe’s constant flood of appalling reports including starvation, 75 percent unemployment, a cholera epidemic, an abandoned currency, and the silencing of dissidents and journalists cloaks at least one reality—as I just found out, Africa’s Adrenalineville, the Victoria Falls region, is still open for business—detached retina rumors and all. My amazing, safe holiday there doubled as targeted charity, whether in the form of guide and server tips, supporting local businesses, or gifting locals with staple goods. The large tips I gave to nearly every guide, driver, animal caretaker and hotel staffer I met, those workers fortunate to still have jobs, all delivered most of that money back to their families in the other troubled parts of the country. The NGOs—and the State Department—aren’t wired that way.

The poorest 40 percent of the world’s people share just five percent of the global income, while the wealthiest 10 percent benefit from 55 percent of it. Tourism, however small, can start redeveloping a fallen nation’s economy. Zimbabwe’s lingering tourism holdout sector needs you now more than ever. Harare, the desperate capital 500 miles away, really is a world away. The other significant city, Bulawayo, is 250 miles away. Vic Falls, as they call it, is an oasis defying Zimbabwe’s current curse.
When a country is politically ripped apart, only a shred of balanced news escapes. Zimbabwe’s troubles are not what typically troubles African nations: Border conflicts, in-country racial tensions or attacks on innocent foreigners. As opposed to the corporate crime wave that consumed a chunk of America’s savings, Zimbabwe’s implosion seems to be a singular manmade crisis. Less than 300 skilled white farmers remain in Zimbabwe, as opposed to 4,500 when President Mugabe’s invasions began in 2000—and the remaining white farmers maintain only small portions of their original property. The people inheriting these lands as rewards for their allegiance to Mugabe don’t know how to farm the land. Previously known as Rhodesia, this country was Africa’s second largest agriculture producer. How many more false dawns can the people of Zimbabwe endure?

Visiting one of the most screwed up places in the world is ground zero for the redefinition of hyperinflation—a 500 quadrillion Zimbabwean dollar note couldn’t buy a loaf of bread. Before being completely abandoned, the Zimbabwean dollar became a laughing stock with the introduction of a $100 trillion note. Today, the US dollar and the South Africa rand are the official currencies.

With bank wire transfers discontinued and irrelevant banknotes, Zimbabwe has resorted to the old-fashioned barter by using foreign currencies that are worse for the wear. Have you ever turned back a wilted five-dollar bill at your local deli? The US Government routinely pulls wilting bills out of circulation and literally burns that money and replaces them with crisp bills. Zimbabweans handling precious foreign bills are inspected and exchanged like precious treasure.

This was a difficult story for me to write. Typically, I can crank out a feature in a day or two, but as I attempted to translate my notes into something user friendly, the idea of sending readers to a place portrayed as hell on a daily basis was disquieting. While in this tattered country, which was not long ago a prosperous exporter, the government denied visas to Jimmy Carter (a first for him), Koffi Annan, and Nelson Mandela’s current wife—the team had only a humanitarian agenda to assess food shortages. The same day, with some guilt, I enjoyed an awe-inspiring helicopter ride over the stunning Victoria Falls.

Most safaris cost about $1,000 a night. The South Africa Rand, for instance, is very strong against the US dollar. Travel to Zimbabwe is extremely affordable compared to the rest of Africa. Victoria Falls area safaris cost 50 percent less than similar products (luxury or otherwise) in South Africa. Accommodations are 5-star but with 3-star price tags. Americans also need to be informed about The Falls, spas, adventure options, fine hotels, shopping and great cuisine. It’s also friendly to the backpacker set. This corner of Zimbabwe, though not part of their gruesome reality, is a beacon of hope for the rest of the country. 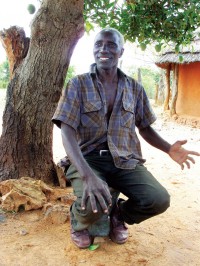 Victoria Falls, a village of 45,000 people in Zimbabwe’s northwest corner, shares a border with Zambia that is the Zambezi River. The gracious, proudly-dressed locals speak eloquent English and share wide, white smiles—and there’s a reason for those white smiles. Many locals I met, who lived in non-electrified villages, ate only organic foods and had never ingested a preservative in their lifetimes.

Built in 1905, the Victoria Falls Bridge crosses the 1200-mile long Zambezi just below the Falls and connects Zimbabwe and Zambia by both road and rail. This bridge over Africa’s fourth longest river is a platform for many adventures, including an entertaining attempt at “suicide practice.” I’d never bunji jumped until now. The world’s third highest bunji jump (New Zealand and South Africa rank first and second) enjoys a 110-meter freefall. With rumors banging around in my skull about faulty equipment, strokes, people wetting their pants and overstretched cords jolting participants so they’re retinas detach, I was also fighting a nasty cold. Again, I realize that engaging in entertainment-danger in a country replete with severe real-life danger sounds ridiculous—but remember, I’m also attempting to compete with the State Department and reallocate money back to the people who truly need it. 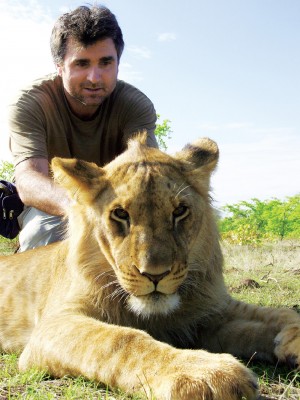 The mile-wide Victoria Falls spills 55 million gallons of water per second (in springtime) into the deep gorge that is a whitewater rafter’s nirvana. Viewed by spiritualists as Africa’s umbilical cord, once the Zambezi River tumbles over the Victoria Falls shelf into a gorge, it creates a massive, steamy spray that can be seen from space. Then, the whitewater rages through a beautiful, winding canyon. This natural wonder combination makes for some serious recreation, including many class-V rapids.
I recommend starting with an upriver Zambezi cruise, a floating happy hour that quietly passes bands of hippos peering from the waterline. Hippos, who have an eight-month gestation period, exemplify nonchalant game, from a distance. Once you’ve enjoyed being calmly on the river, it’s time fly over it, dangle over it and then ride in it. This corner of Zimbabwe could be renamed Adrenaline-ville. Heart-pumping activities based along the Zambezi River gorge also feature a gorge swing. Imagine jumping backwards off a plank on the gorge’s edge for a 70-meter freefall over a hairpin river turn 120 meters below. You are attached to wires set up like a pendulum—but that doesn’t prevent an involuntary gasp followed by a near blackout. Richard Branson took several long pauses on the same platform, eventually giving in to fate on his fourth attempt.

Another highlight was the Lion Encounter, a conservation-based activity where guests walk alongside lion cubs aged between 6-18 months with no leads or collars in their natural environment. A once-in-a-lifetime experience that invites epic photography, these orphaned lions will remain in captivity for life, however, their offspring are returned to the wild. Trained guides and scouts accompany guests on their 60-minute walk after receiving a full safety briefing—although they do share many house cat mannerisms, they’re still unpredictable 400-pound beasts with fangs. Administering a strong neck massage, I had one of the lions purring—until she was done with the affectionate moment and whirled her head around to knock my hands aside.
The elephant-back safari seemed silly to me at first, but it was high time to talk politics, and life, with my elephant pilot. These rescued elephants walk as a team, mothers nurturing their babies, along trails teeming with views, birds and foliage.

The Victoria Falls Safari Lodge redefines the good life under thatched grass-straw roofs, but not without one challenge. A persistent Ververt monkey visited my balcony religiously to check to see if my door was locked. A burglar extraordinaire, every two hours he jumped onto my balcony, marched over to the base of my hinged wooden doors and punched at the other side of the floor door-locks to see if I’d slipped up on my security regimen between his balcony visits—unashamed looter testing. Each time, he (I named him Mugsy) bounded away, defeated, my gaze stretched out over the verdant Zambezi River jungle basin to remind me that this was his world. As payback for my tightened security, twice a day he jumped up and down upon my roof like a rebellious teenager or a warped prison guard reminding a caged man of who’s in charge.

I later found out that the monkey burglar bounds from balcony to balcony, 72 in all, on a predictable schedule. Robbery tactics include frenzied snack investigations that devastate a room in ten seconds. Prized targets include coffee and sugar packets, toothpaste, and medications—they rummage through everything. I heard stories of baboons sending their small babies through small windows to loot refrigerators and then hand the groceries back out the small window to mom.

Obligate carnivores, the vultures also had a lesson to share. These bulky, vicious, flying eagle-roosters feed like a loose rugby ball swarm. The White Back and Hooded varieties, along with other shapes and sizes all have different beak designs that contribute to a phenomenon that is apropos to Zimbabwe today. You’ll see vultures of varying species simultaneously feeding on one carcass in a seemingly cooperative manner. Larger birds, with specialized beaks, rip open the carcass while others with smaller beaks stand by to eat the flesh between ribs and joints—back to basics, just like Zimbabwe’s vulture economy, surviving via foreign currencies and bartering.

Jungle accommodation means a 24-hour bird/insect chorus as loud as midtown Manhattan’s rush hour din—but mother nature’s soundtrack soothes. Nearly 100 years old, the palatial, 180-room Victoria Falls Hotel is still worthy of a Queen’s visit—Queen Elizabeth stayed there in 1947 and celebrities including Bono continue to visit. Surrounded by great lawns and gardens dotted with wandering warthogs and darting monkey-burglars, the views of Victoria Falls Bridge and the gorges below the falls are unmatched. The 15-minute end-to-end walk across the Grand Old Lady of Africa is a lesson in grand Edwardian-era architecture. Bow-tied, red and white jacketed waiters and bellman provide eloquent service—many on staff have been there more than 35 years. Tastefully furnished in elegant period pieces, its walls are an adorned tapestry of the history of intrepid early explorers, and the birth and growth of Victoria Falls town. Another stunning accommodation option is the Gorges Lodge, 10 cliff-side chalets all looming 800 feet over the Zambezi River gorge.

Victoria Falls emerged, as did the other reputed dangerous places I’ve recently visited, as a wonderful memory. I’m still having dreams of freefalling in Zimbabwe—and I’m not talking about their economy.

PS
Northam filmed three episodes of American Detour in Honduras shortly before the June 2009 military “coup” exiled their president. The U.S. State Department immediately issued a warning for all non essential travel there — which, as these often ill-conceived warnings routinely do, immediately devastated tourism. Northam’s civilian contacts in Honduras insist that visiting is still safe. Go see for
yourself.