Now stop being a victim

Gene, a patient, was bitter and angry at having been screwed: He was an officer on a freighter when one of the two ship engines failed. He successfully navigated the ship through difficult channels and brought it to port to get fixed. Gene was proud of the job he did. Yet, he was fired immediately afterwards. The ostensible reason was that he hadn’t logged in correctly. Gene scoured both maritime and company manuals and saw that he wasn’t required to log the engine failure. Immediately after reaching shore, his ship, as well as others in the company, was anchored because of lack of business. Shipping took a nosedive and the company used whatever excuse it could to rid itself of expenses, and that included firing people. 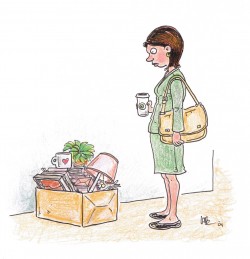 Inequity sticks to the ribs! Being screwed leaves scars that are hard to remove and the resulting emotions often remain intense throughout life. I’m still angry many years after Mrs. Silver, a third grade teacher, slapped me because she thought that I was bucking the kids behind me on the Up staircase. She didn’t see that Frankie Janiskovic had reached between my legs and grabbed my testicles. I’m not angry at Frankie. I’m sure I did the same to him, but if I ever see Mrs. Silver…!

Gene avoided going to sea after being fired. He didn’t look for a job for over six months. He was able to rationalize not looking for a job because of the pervasive slowdown in shipping. However true, a significant contributing reason was his bitterness, shame, and anger. He was letting being screwed bring his career to a halt. It wasn’t being fired that prevented him from getting a job; it was his emotional response that was the barrier.

Inequity sticks to the ribs!

The list of people belonging to the Been Screwed Club is huge; I welcomed Gene in. Although skills are needed to avoid getting screwed, in many cases, as in Gene’s, we’re blindsided by events. A different skill must emerge in order not to be a perpetual victim. That skill is to accept the reality that inequity will occur, and to be determined not to victimize oneself by withdrawing and feeling angry or sorry for oneself.

In Gene’s case, he had to accept that his screwing was in the past and that given the scarcity of shipping jobs, he had to work harder to find a new one, let alone not wait for a choice job, but take the best one available. After several fruitless trips to the union hiring hall, Gene was able to find a seasonal job on a ferry. The pay is not nearly as high as his previous job, but much higher than being unemployed. They like him on this job, and there is talk about it becoming more permanent. Meanwhile, other positions are beginning to open.

After being a victim of a screw job, we must make sure that we don’t victimize ourselves. Although it’s natural to withdraw, lick our wounds, and feel sorry for ourselves, ultimately we need to pull ourselves together and generate even more energy in our chosen direction. Welcome to the huge nonexclusive club: The Been Screwed Club.