Spend a little time at a networking function and you’re likely to bump into an associate who has decided to reinvent himself in a new career. For many, the idea of pursuing a childhood dream is reason enough. For others, the changing economy has made their once thriving industry stale. One thing is for sure, increased access to continuing education in recent years has greatly improved the possibility for professional mobility, lateral or vertical.

Whatever the reason, job security and a stable industry are often sited as top priorities by those considering a change in vocation. While no sector is ironclad, there are some that promise to expand in coming decades. The following four are among them. In addition to above average salaries, the perks include income growth, creativity, excitement, unique fringe benefits and yes, increasing need. Best of all, they are attainable in a relatively short time. As with any life decision, a plan of execution should be carefully considered, as well as pros and cons. In the interim, part time and volunteer work can provide important insights until the best options are decided. 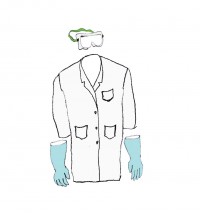 Science, especially medicine, is a perpetually expanding field. With new technology comes new methods of diagnosis and treatment, helping patients lead longer and healthier lives. Laboratory technicians, often working behind the scenes, are an integral part of the diagnostic and treatment process.

Excellent job growth and job opportunities are expected, with employment expected to rise significantly in the near future. Carolyn Preiato, the lead medical technologist at Southampton Hospital, states “there are many jobs available in the field with flexible hours, full or part time.” Marie Alessi, a medical technologist with the chemistry department at Southampton Hospital, adds that it is a “secure career.” With new tests being developed and the population expanding, more laboratory testing will be needed and more people will be needed to perform those tests. Preiato reflects upon her early career, explaining that many tests were performed manually, but also states that the technology has significantly improved, with both better instrumentation and smaller sample sizes needed for accurate results.

Alessi states that the “lab is a very busy area that supplies MDs with seventy to eighty percent of diagnostic information on a patient.” Typically, lab techs analyze cells or body fluids to look for pathogens (bacteria, fungi, viruses, etc.), test to see how patients are responding to specific treatments, prepare specimens for evaluation, and match blood types for transfusions, often working in a hospital setting but sometimes at a private practice. Preiato began her career as a lab technician right after high school. She then completed her associate’s degree and moved on to earn her bachelor’s degree in Health Care Administration at St. Joseph’s College in Patchogue, which was paid for by her union, and became the lead technologist at Southampton.

To begin taking classes for an associate’s degree in medical technology, a high school diploma or GED is required. Once the associate’s degree is completed, usually in two years, most students will take a national certification examination, which is offered by the American Society for Clinical Pathology Board of Registry. To become licensed to practice in the state of New York, students must pass the exam with a 75 or above.

Farmingdale State College offers the associate’s degree in medical laboratory technology and also offers a fast-track option for students who may have already taken college courses and meet the school’s requirements for biology, chemistry and liberal arts. Starting pay varies, but generally fall in the $30-45,000 range. For more information on this degree or to find out more about the career, visit http://www.farmingdale.edu.

Landing a job as a pilot isn’t only for those with a military background. Recent changes in flight training and new planes have made it easier and cheaper to pursue a career in the sky. While the employment market for pilots isn’t recession-proof, Mike Mancuso of Mid Island Air Service at Brookhaven Airport predicts it will be back on track by the time a beginner completes training for a commercial pilot’s license. Neil Visse, Vice President of Heritage Flight Academy in Ronkonkoma, expects there to be a greater demand for pilots in a few years when Baby Boomer pilots begin turning 65, the mandatory retirement age for pilots.

According to the US Bureau of Labor Statistics, commercial pilots begin their careers making around $30 50,000. Salaries vary depending on type, size and speed of the aircraft a pilot is licensed for, but the BLS says the mean annual salary is $75,500, in addition to health and life insurance benefits.

A new—and cheaper—way to begin flying is to first get a light sport pilot’s license, which only requires twenty flying lessons and costs a few thousand dollars, according to Louis Mancuso Jr., President of Mid Island Air Service. “Everybody’s going to start like that in the future,” he said.

Aspiring pilots won’t be able to fly on their own without a student pilot’s certificate, which requires passing a written test and receiving an endorsement from a flight instructor. Faa.gov, the website for the Federal Aviation Administration, has sample questions. A certificate signed by an aviation medical examiner, which Visse describes as a “glorified physical,” is also necessary.

Candidates must earn a private pilot’s license, which requires a minimum of forty hours in flight training (the average pilot trains for seventy hours), before taking the test and being allowed to fly passengers.

One of the final steps is testing for a commercial pilot license. A minimum of 250 hours is required, but it’s never a bad idea to log more time. As Visse points out, the majority of entry-level jobs go to pilots with experience closer to 1,000 hours. Louis Mancuso Jr. says most pilots-to-be work as flight instructors first, gaining experience and money to pay for flight school, which Mancuso says totals about $15,000 for someone working toward a commercial pilot’s license if the light sports license is acquired first.

Aviation classes are offered at several locations on Long Island, including the Dowling College School of Aviation (http://www.dowling.edu/school-aviation), Mid Island Air Service (midislandair.com), Academy of Aviation LLC (http://www.academyofaviation.com) and Heritage Flight Academy (http://www.heritageflightacademy.com). Regardless of direction—light aircraft or commercial—the career choice is a commitment worth weighing carefully and often done more for the love of flying than the paycheck. And like so many fields, aviation is highly competitive, making willingness to relocate (or work a part-time job) part of the equation.

Solar power is often the first thing mentioned in a conversation about green energy. The not-so-new technology has gained momentum and doesn’t seem to be slowing down. With exponentially increasing solar installations comes a need for more employees. In the short term, solar power offers career options in sales and installation, targeting a wide range of workers.

Solar power’s increase in national and local popularity is evident here on Long Island. According to Gordian Raacke, Executive Director of Renewable Energy Long Island, there were 842 new solar systems installed on the Island between 2000 and 2006, and in the three years since, about another 1,000 were installed.

Long Island universities are adapting to the growth in solar power and are offering programs and workshops in solar installation. Farmingdale State College’s Solar Energy Center offers Residential PV (photovoltaic) Installation Workshops for anyone with a high school diploma and electrician experience. Professor Yelleshpur Dathatri, the course instructor, said there are five workshops per year, each for five weeks and with registration for up to 25 people.

Dathatri confirmed the solar industry is growing and companies are making changes to include solar power. “The new word is solar and electricians want to incorporate it into their businesses, so they think it’s a good idea to get training,” said Dathatri.

Another way going green can translate into pocketed green is through sales. A background in business and a bachelor’s degree can take one further than expected in the world of solar power. Ed Steins, CEO of The Solar Center with offices in Plainview, said solar training is a bonus for someone looking to join his company’s team, but it is not required as they have their own “internal training program.” He added, “There are certainly programs at almost every community college, but we’ve hired people who don’t have any solar schooling.”

The Solar Center, one of several solar energy companies on Long Island, which sells and installs solar panels to businesses and residences, is an option for prospective salespeople. They are looking for candidates with commercial business experience. Steins explained the salesperson’s process includes making measurements to understand the number of solar panels to use, and determining roof size, amount of shade and the installation finances. Despite the possibility of temporarily leaving your business comfort zone, Steins explained, “learning the industry is straightforward since you’re working with experienced people in the company.”

The demand for solar power is due to increase as system costs are lowered and more people support green technology. With this increased customer base, the need for salespeople and installers will continue to rise. For more information on Farmingdale State College’s Solar Energy workshops, visit http://www.farmingdale.edu.

“Being bilingual does not a translator make,” according to Lisa Alesci of Multinational Translating Service in Central Islip, who adds that “there is a great deal more to the combined science/art of translation than the ability to speak in two languages.” Although bilingualism does not automatically make one a translator, it certainly is a good start. If you have a bilingual background and are looking for a new career direction, or maybe just a supplemental income, translation could be the answer.

Translation deals exclusively with the written word, as opposed to interpretation, in which the interpreter orally translates between speakers who do not have a common language between them. Translators always work by changing a document into their native language, never the other way around.

Whether it’s freelance translation or working with an agency, certification is valuable for a leg up against the competition. The American Translator’s Association (ATA) offers a high-quality certification program that Lisa calls “an invaluable resource in terms of the yardstick for quality in this country.” However, she warns that the exam is “rigorous and exacting.” Eligibility for the program requires a Master’s or Doctorate degree in Translation/Interpretation or a Bachelor’s degree with at least two years experience working as a translator. Those without a degree must show proof of at least five years experience.

Freelance translation is also an option. Many freelance jobs are international and therefore place less emphasis on American certification programs like the ATA. When asked about the necessity of such qualifications, Brooklyn-based freelance translator Neil Claridge said that “many clients, rather than asking for your degree certificate as proof of your education, request a test translation so they can see the quality of your work for themselves.” Neil also says that the translators he has worked with “come from different professional backgrounds” and that someone holding a degree in something akin to International Relations would “have a good chance since it relates to the world of languages.”

Like many first jobs, getting a foot in the door as a freelancer is largely about knowing the right person. “My first translation came through a close connection,” said Neil. “My girlfriend at the time worked for a large pharmaceuticals company which needed a diabetes ‘manual’ translated from Italian into English. This gave me a wonderful reference to put on my CV, which I think helped launch my career.” Aside from opportunities such as this, there are numerous networking communities online that are geared toward organizing freelance work between clients and translators. Sites such as proz.com display translator profiles to help prospective clients search for a suitable match for their request.

Remember, a summer in Madrid or college French courses won’t cut it in the world of translation. Being bilingual is a good jumping off point but the ATA, a good education, a global outlook and lots of practice are all factors of what it takes to “make” a translator. For information about the ATA, visit http://www.atanet.org.