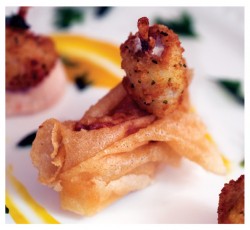 There are many excellent restaurants on Long Island—none are better than Mirabelle. That was true in St. James where Chef Guy Reuge and his wife Maria presided for a quarter of a century, and it’s equally true now at the historic Three Village Inn in Stony Brook where they captain both the casual, comfortable Mirabelle Tavern and the upscale, haute cuisine Mirabelle Restaurant. Mr. Reuge’s appealing marriage of innovation and tradition not only survived the Italian-Asian onslaught but prospered despite it.

Discrete, serene, subdued, underplayed, quiet and classy are words that come to mind in describing Mirabelle. The two dining rooms, with their fireplaces, single pink roses on each table, candles, soft lighting, appropriately relaxing music and rose colored walls, form a neutral platform that puts the focus where it should be, on the food. The ingredients here are fresh and distinctive, the presentations exquisite and the portions relatively small. While the ambiance is calm and the clientele well heeled, there is no anxious effort to impress. Servers are friendly and engaging. The food speaks for itself and always has. 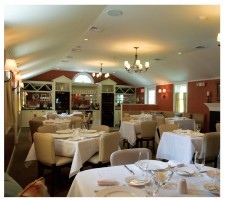 California farm-raised rabbit is offered three ways. This tiny, terrific trio is enhanced by its corn coulis, tomato confetti and potato confit. For a more substantial hefty helping, try the pan-roasted Painted Hill Farm beef filet with its powerful morel-Port sauce, elegant leek-potato cream and potato millefeuille that breaks apart in the mouth with feathery delicacy. Another broad-shouldered entrée is the roasted loin of lamb with interesting curried egg (in an egg shell), yogurt cilantro, savory honey glazed shallots and an unexpected eggplant tempura. Fortunately, the two-course duck Mirabelle, deservedly a favorite at the Saint James Restaurant, has made the jump to Stony Brook. It’s a moist marvel permeated with flavor. The seared breast comes with fava and coco bean ragout and shallot-Cassis marmalade while the confit of leg is paired with a ragout of corn, a Serrano ham parcel and a berry gastrique.

The respectable sorbet trio is not made at Mirabelle, but the Gateau Opera, chocolate financier cake and special of plum soufflé are. All three are winners. The layered (almond sponge cake, chocolate and coffee mousse) Gateau Opera with a delicate ganache glaze is recommended, so too is the intense chocolate financier cake, but don’t expect much more than a bite or two of this diminutive offering. The last bite of the night might have been the best as well. The plum soufflé, a fluffy, airy light concoction infused with a poured plum sauce and anchored in a platform of ripe plums, is a triumph as is Mirabelle. 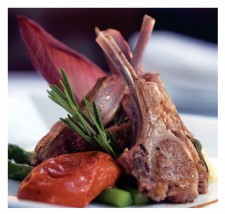 Blue Sky, in Sag Harbor, stands squarely in the middle. It is neither a luxury spot nor a joint. It’s not the most, nor the least, expensive East End restaurant. Its Executive Chef Giuseppe Desiderio, from Capri Italy, cooks not traditional Italian fare but Mediterranean cuisine. It certainly isn’t the best nor the worst eating-place in the high-priced Hamptons area.

What is it? A jolly, upbeat, laid-back venue that replaced the long running Spinnakers on Main Street while retaining its informal spirit. Its brick wall, bare wooden floors and tables, open French windows, somewhat cramped booths, pressed tin ceiling, skylights, indoor patio, pizza oven, photos of local water scenes and whitewashed wall with nautical blue accents make it a congenial, welcoming spot. The warm, crusty bread, olive oil and hummus that greet newcomers add to Blue Sky’s warmth, and its diverse Portuguese, French, Spanish, American and, yes, Italian menu and wine list hold the interest of most diners. Service is pleasant but not polished. Runners auctioned off dishes (“Who ordered the chicken?”) and the host’s wine glass was filled first, rather than last.

Appetizers I admired were a fine, fresh seafood Martini salad boasting bits of shrimp, scallops and calamari in a tangy lemon vinaigrette and a somewhat difficult to eat, but very tasty bruschetta due of finely minced shrimp, hot peppers, rugola and pepper aioli. Tasty too were the Tzakiki baby lamb chops, but their soggy breading wasn’t a virtue and the crab cake with undressed greens, scant remoulade sauce and a spec of corn kernels called “corn salad” yielded a crab mash, not the more describable shards of crab meat.

The paella Valenciana here is one of the best versions of this Spanish specialty on the Island. It’s dense with seafood including a half lobster and plenty of clams, mussels, shrimp and non-seafood (chicken and spicy slices of chorizo), all of which is anchored in moist (not the often dried out) rice. Fanned out medallions of juicy, medium-rare Margret Farm duck breast enhanced by apple natural jus is another winner. Jumbo shrimp Tahini paired with mashed black beans and spinach salad lived up to their name, while a big, thin pounded veal chop Milanese that sprawled over the rim of its plate was a tad too dry. 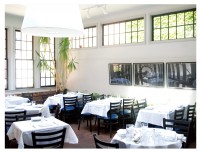 There aren’t many dessert choices at Blue Sky, but most of those available are top notch. Only a scoop of tasteless, old (it was full of ice crystals) mango sorbet disappointed. A flaky peach torte, crowned with a scoop of creamy vanilla ice cream, was a sweet I’d order again as was a silken, crème brûlée. The top dessert pick is the chocolate trio, rich chocolate ice cream, chocolate mousse and a decadent brownie like chocolate cake.