Conte Cuttino and Ed Gowins cut intimidating figures without ever strapping on a pair of shoulder pads. The running backs possess a stat sheet that should be the talk of the nation. Their presence in the same backfield is something to behold. 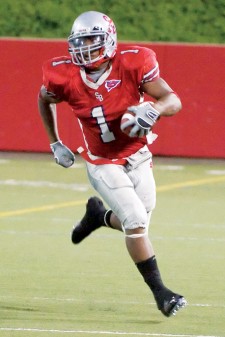 There is nothing subtle about Gowins, from the tattoos landscaping his massive arms to the oversized diamond earring, emitting a sparkle as blinding as any sunset. Just imagine how the former Bellport High School star plays. It’s in-your-face power running for four quarters.

“They feel [me],’’ said Gowins, who was named National Freshman of the Year by College Sporting News. “That’s one of the things I like to do. When I see someone in front of me, I run them over. The second time they’ll think twice about trying to tackle me.”

So why is this dynamic duo getting so little attention? The truth is the foundation of Stony Brook University football might as well have been built on swampland. Sales jobs don’t get much harder.

College football may reign supreme in Los Angeles and Omaha—and every burg south of the Mason Dixon. But in the tri-state area, and Long Island in particular, the sport garners about as much respect as soap box racing.

And that’s understandable. Stony Brook finished 2008 with a losing record. The Seawolves have never won a postseason game in 25 years of existence. They have never even beaten big brother Hofstra, another small fish in the sea that is New York sports. 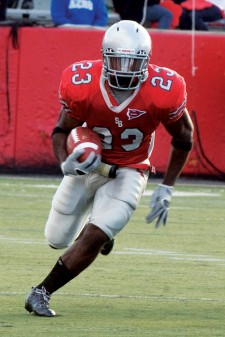 It’s all part of a muddied past, one whose narrative arc has been on a steady ascent.

The expectations are starting to simmer. For the first time, Stony Brook is a fully-funded, 63-scholarship program—on par with the rest of the Football Championship Subdivision (the oversized and overly confusing name of what was formerly known as NCAA Division I-AA football).

Stony Brook enters its second year in the competitive Big South Conference. And with the most dangerous running back tandem in college football, the program has created some insider buzz. With Cuttino and Gowins plowing through opposing defenses this fall, Stony Brook could be on the verge of a breakthrough season.

“I just let them play,’’ third-year coach Chuck Priore said. “I tell them all the time, ‘Just go play. If you both do your role as football players, then good things will happen to you.’ They are both talented enough.”

The team started 2008 off 1-5 and scored all of 10 points over three consecutive games, the last a 33-0 domination by nationally-ranked Liberty. Then Priore unleashed Cuttino and Gowins in the second half of last season with record-breaking results.

It turned on October 19, a 20-19 home win over Charleston Southern. Cuttino racked up his biggest performance to date with 107 rushing yards and redshirt freshman quarterback Dayne Hoffman tossed a 23-yard touchdown pass with 1:06 left. Gowins broke big runs on the winning drive.

“It probably took a little time to get things going,’’ said Cuttino, a senior from Uniondale. “Eddie and I were able to get things done at the end in a big way.”
Stony Brook won four of its final five games to finish in a second-place tie in the Big South Conference. And the Seawolves transformed from a sputtering offense to an unstoppable ground attack.

“Once we were able to settle in on a plan and mature as an offense, Conte and Eddie’s performances helped catapult us to success,’’ Priore said. “We were able to put things together, and those two kids the second half of the year were very impressive.’’

On November 9, the Seawolves cranked out 635 yards on the ground in a steady downpour to pound host Iona, 68-9. Gowins ran for 278 yards and three touchdowns while Cuttino had 205 yards and three scores. The Football Championship Subdivision team record for rushing yards in a game is 681 by Missouri State in 1988.

It was a banner day for Stony Brook. Coincidental or not, Iona announced 12 days later it was dropping its 42-year-old football program altogether.

The Seawolves closed the season one week later with another rout, a 40-26 win over Virginia Military Institute. Stony Brook totalled 622 yards of offense, paced by Gowins (250 yards and three touchdowns) and Cuttino (234 yards).

“We complement each other in a big way,’’ the shifty Cuttino said. “Eddie has bulk but is deceiving because he has speed. As far as teams trying to game plan against us—it’s hard. We can do many of the same things. He has a bigger body, a bigger frame. But it doesn’t matter who is in the backfield. Coach doesn’t have a problem with Eddie going outside or with me running inside.”

Gowins spent a year in prep school before returning home to play at Stony Brook. His first collegiate carry went for a 22-yard touchdown. Paired with the equally electric Cuttino, who knows what the two can accomplish with another year of experience.

Priore must replace both receivers and two linemen. And Hoffman suffered through growing pains at quarterback a year ago. The Seawolves (5-6 overall, 3-2 Big South) are picked to finish second behind two-time champ Liberty in the Big South.

But the schedule is unforgiving, with September games against defending Patriot League champ Colgate and Ivy League winner Brown. The Seawolves open the season September 5 at Hofstra. Even though Stony Brook is 0-12 lifetime against its cross-Island rival, at least the game is local. Seven of the team’s first ten games are on the road.
“Execute our game plan and we have the potential to win the conference,’’ Cuttino said. “We need to stay focused and do our job.”

Stony Brook football is a tough sell. But Cuttino and Gowins offer a persuasive argument. Getting the players to believe is an important first step on the road to better days.