LongHouse Reserve is an unusual place. Set within a tangle of winding roads in East Hampton, it can be tricky to find. With the frantic pace of August a recent memory, September might be a good time to give the journey a try. Towering trees cloak glimpses of what lies within but after walking through the arched entranceway, it quickly becomes apparent LongHouse is a place of beauty that entwines art and nature.

During late spring and summer, LongHouse Reserve’s 13-acres bubble with garden tours, sound meditation gatherings, benefit parties and special events that keep art and horticulture uppermost in mind. September is quieter—there is only a single awards event on September 19 to collide with private wanderings.

It’s easy to be entranced by carefully-placed trees, the arranged gardens, the peaceful setting or the rows of red shrubberies (in season). That said, the sculptures alone are worth the drive. The permanent display includes around 60 sculptures purposefully set among the landscaped estate. The art is diverse and unexpected. Each channels the worlds of art and design that are made by creatives worth knowing. 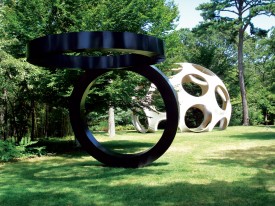 For instance, a 33-foot sculpture, Fly’s Eye Dome, was designed by Buckminster Fuller. Fuller (1895-1983) was an American architect and engineer who invented cutting edge designs aimed at making modern living easier. The sculpture is near the entrance.

Equally as easy to see is the towering Irregular Progression #7 by Sol LeWitt. It is in the middle of the property. LeWitt (1928-2007) helped put modern conceptualism and minimalism on the map. He was known, in part, for his deceptively simple geometric sculptures and drawings.
Intriguing glass sculpture by Dale Chihuly can be spied not too far from the entrance. A celebrated studio glass artist, Mr. Chihuly is credited with pushing blown glass into fine art via colorations that help make large-scale installations and environmental art.

Nestled deep inside LongHouse is a 16-foot by 16-foot white chess set of marble dust and concrete. Play It By Trust was made by Yoko Ono. Widely known as John Lennon’s widow, Ms. Ono was an avant-garde artist before and after she met John Lennon. She has worked in film, performance art, music and the visual arts.

No matter where the feet may wander, there’s a sculpture the eye can spy. There’s ceramics by Toshiko Takaezu and Peter Voulkos (1924-2002) and bronze sculptures by Willem de Kooning (1904-1997) and Lynda Benglis. An exhibition featuring the art furniture by Judy Kensley McKie remains on view through October 10, when LongHouse Reserve closes for the season. 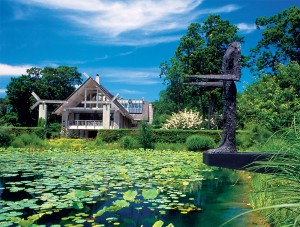 LongHouse launches each year in late April with its Rites of Spring exhibition. This year’s show included sculpture by Eric Fischl, Magdalena Abakanowicz, Gonzalo Fonseca (1920-1997) and others.

LongHouse Reserve (formerly LongHouse Foundation) was founded in 1991 by Jack Lenor Larsen, a textile designer, author and collector. He bought the property in 1975 and designed much of the landscape. In 1986, a house inspired by a 7th century Shinto shrine was added. The house is not open to the public.

The non-profit organization was started to preserve the East Hampton grounds. The estate is tended by legions of volunteers. It also physically demonstrates the group’s mission: “to exemplify living with art in all its form.”

LongHouse Reserve is located at 133 Hands Creek Road, East Hampton. It is open Wednesdays and Saturdays from 2pm to 5pm through October 10. Admission is $10 for adults and $8 for seniors. Children under 12 years old and LongHouse Reserve members are free. For information, visit longhouse.org or call (631) 329-3568.

September Brings Art to the Queens Botanical Garden
International papermaker and artist Jane Ingram Allen will work as an artist-in-residence at QBG through September 25. Paper made with plant material found at QBG will be made into art. Community involvement is encouraged. Special events are being held coinciding with Ms. Allen’s residency. They include papermaking workshops, demonstrations, an art exhibition with receptions, artist talks and open studio tours of her onsite workspace. Ms. Allen is a Fulbright Scholar Award winner and has been an artist-in-residence in the Philippines, Japan, Nepal, Brazil and the United States. Her art is inspired by nature and made with materials collected from site-specific locations. She has taught art at colleges in New York State. For information, visit http://www.queensbotanical.org or http://www.janeingramallen.com.