Some musical artists of the classic rock era of the 60s and 70s have played in one, two or maybe three or more great bands. Names like Eric Clapton, Neil Young and handful of other prominent names come to mind. Ian McLagan is also a rock artist of that period who has played in many great bands and had a thriving solo career, and has recently released his best solo album to date.

McLagan was the keyboard player of the mod gods the Small Faces, who formed in London, England in 1965, and which also included Steve Marriot, Ronnie Lane and Kenny Jones. The group had a couple of hits here in America—most notably “Itchycoo Park”—but in England they were beloved as the band that spearheaded the mod music and fashion scene. Members of the Who, particularly Pete Townshend, would rather talk about how great the Small Faces were than sing the praises of the Who. In fact, Townshend would go on to make the cult classic Rough Mix album with Ronnie Lane and when Keith Moon died, Kenny Jones became the Who’s drummer.

For all of its success, the Small Faces broke up in 1969. Steve Marriot left the band and, along with Greg Ridley of Spooky Tooth, Jerry Shirley, and Peter Frampton, who was a member of a band called the Herd, formed Humble Pie. Marriot was the band’s frontman and for many was considered the voice and the face of the group. From the ashes of the Small Faces another truly great group rose. The three ex-Small Faces were joined by two members of the Jeff Beck Group: its bass player Ron Wood and the band’s singer, a guy named Rod Stewart.

With Ronnie Lane continuing on bass, Wood moved over to guitar and the new five-piece band simply called itself the Faces. It became one of the best live bands of that era and, it’s safe to say, had more fun playing and partying around the world than any other group of that time. They were such prolific tipplers that they installed a full bar and a bartender on stage. The group’s handful of albums were filled with such FM hits as “Stay With Me.” Eventually, with Rod Stewart also recording solo albums and then Lane leaving the group, the band came to an end in 1975.

McLagan continued playing with many people, and eventually he re-joined Ron Wood (“Woody”), this time as part of the Rolling Stones. He played with the band on its 1978 Some Girls tour and again in 1981 on the Tattoo You tour. He was also a member of the New Barbarians, the group, which was Keith Richards’ and Woody’s short-lived, supergroup side-project in 1979, and which also included longtime Stones sax sideman Bobby Keys, Stanley Clarke and Joseph “Zigaboo” Modeliste of the Meters. 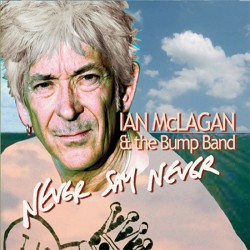 Through the years, McLagan has also toured with Bonnie Raitt, Bob Dylan and many other groups; he was also a member of Billy Bragg’s group the Blokes. Despite all the recent activity, though, McLagan’s leadership of his own group, the Bump Band, as well as being part of the thriving Austin, Texas music scene have been his consuming passions.

McLagan moved to Austin from Los Angeles in 1994, after one too many earthquakes. The amiable Brit fits right in with the relaxed roots scene. He spoke like a true music fan in describing the music scene in Austin. “There’s so much great music going on here every week,” he stated. His association with the town and his unique sound with the Bump Band make it hard to accurately describe what kind of music he plays. “I’ve been classic rock,” McLagan began, with his frequent hearty laugh. “I’ve been mod rock or whatever. I’ve been a lot of things. I played the blues and I’ve played country music—I’ve played all kinds of things. It’s rock ‘n’ roll with a little rhythm and blues.”

McLagan has become very much in demand as a touring and studio musician, also playing with Bruce Springsteen, Joe Cocker, Jackson Browne, the Everley Brothers, Melissa Etheridge and many others. However, he recently turned down a spot on a very high-profile tour (with whom, he wouldn’t disclose) because he’s so busy with his solo career, including the recent release of the band’s Never Say Never, distributed by Maniac Records.

There has also been talk of a Faces reunion tour. McLagan spoke affectionately about the band. “We dressed for a show and the girls liked it,” he said, with another gruff laugh. “The American acts at that point wore Levis and had really long hair.” McLagan felt the main reason the band eventually broke up was because of the departure of Ronnie Lane, citing the significance of his songwriting and bass playing in the band’s sound and success. McLagan was not as happy talking about all the various record company machinations that have kept many of the group’s best albums from being available on CD and how some excellent live video exists, which has also yet to see the light of day.

Equally curious is how a Faces reunion didn’t materialize this year. Wood, Jones, Stewart, McLagan, and Conrad Korsch, Stewart’s bass player filling in for the deceased Ronnie Lane, were rumored to be recording and planning a tour. “There were vague discussions,” McLagan began. “Rod decided to tour solo this year, so we couldn’t get together. We were going to do something, but maybe next year. I never give up hope. There is no album. There was no recording. We rehearsed in London in November. We had a lot of fun, just how it should be. We got on great, it was easy, just like it always was. Rod’s bass player was very good and he respected Ronnie’s parts and played them to a tee.”

There were also various discussions about who would play bass. McLagan said that Woody wanted Flea from the Red Hot Chili Peppers and McLagan wanted Glen Matlock from the Sex Pistols. “Kenny suggested Paul McCartney,” he said with big laugh. Ultimately, McLagan said, “I don’t care who it is playing the bass; if he’s not playing Ronnie’s lines, there’s no point.” Finally McLagan said of the nearly full day of rehearsals, “It was really a lot of fun. I’m kind of disappointed. I thought maybe we would do something this year.”

McLagan talked about that other band he was in with Ronnie Wood and how he came to join the Rolling Stones’ 1978 tour the day before it was to start. The band was originally to use a keyboard player from Peter Tosh’s band, but although he brought a cool reggae vibe to the band (a sound Keith Richards and Charlie Watts were really into at that time), he wasn’t cutting it on the rock ‘n’ roll. “I was scrambling to learn the songs the night before the tour was to start,” McLagan recalled. “I rehearsed all night in Woodstock.” When asked if it was as much fun playing with the Stones as the Faces, McLagan first emphatically stated, “The Faces had more fun than any band.” He then said, “The fun level was equal,” adding about the Stones, that he “was a fan.” There seemed to be a time when McLagan was being viewed as more than just a sideman in the group, but although he never joined permanently, “there was a moment when Keith asked me to join.” Ultimately, though, he warmly stated, “They made me feel so welcome.”

As for playing with Bob Dylan, McLagan said, “Bob doesn’t want his songs played the same way they were recorded. He wants it new every night.”

McLagan seems unfazed by the continuing success he has had. He’s often lionized by musicians of all ages and styles on both sides of the Atlantic for his contributions to the many legendary bands of which he has been an integral part. Also, by working with people like Billy Bragg, Melissa Etheridge, Frank Black and Izzy Stradlin, he’s clearly still a relevant, contemporary artist. He’s such a jovial, content man, and his demeanor is no doubt a major contributing factor to what has made him such a great band mate. Modestly summing up his storybook musical career, which obviously is in a great period, he simply said, “I’ve been pretty darn lucky!”