There’s an old Jewish joke about three old men sitting around a Miami Beach pool. The first says, “Oy vey!” The second says, “Terrible, terrible!” The third loudly barks, “How many times have I told you?! No talking about the kids!”

Being a parent of adult kids is not easy. Being an in-law takes tact and self-control. My generation had more opportunities as the economy was expanding than the generation does now in this declining economy. Their generation grew up with considerably more wealth and less sacrifice than mine. My parents were influenced by the depression and they felt the wolf was at the door, something that influenced me. My grown kids had no such experience and saw the good life as a given, if not a right. Their views and priorities are different as a result of their different experiences. I know I cannot impose my experiences upon them. As a result, I have developed tendonitis of the jaw from biting my wrist in order to keep my mouth shut. Being right is easy, but being effective requires skill.

My son and daughter-in-law, whom I adore, planned to buy all-white furniture after having an infant boy and planning more kids. I did say that active kids stain white furniture. “Ha,” they laughed as they also bought a white rug. “OK,” I said as I bit my wrist, “Your choice.” Many stains later, they predictably gravitated to darker colors. I bit my wrist again, rather than saying, “I told you so!”

“How many times have I told you?! No talking about the kids!”

One client, David, like many old Jewish men in Miami, is in constant turmoil as he agonizes over the fact that his married son is an alcoholic. David can’t sleep, pacing the floor talking to himself as he repeats the advice he gives his son over and over…and over—go to AA, get a job, see a psychologist, stop drinking, stop hanging out with ____, etc. Obviously David is full of good advice, but his constant nagging has become counterproductive, driving his son away rather than building an alliance with him. The son is so turned off by the nagging that he simply lies to deflect it, thus upsetting David more. It is important to separate our problems from those of others and to not own the problems of others. David must refocus from his son to himself.

His problems are David’s not being upset and not destroying his historical alliance with his son. The son needs encouragement and not the constant criticism he gets from his frustrated father. No one grows from constant criticism. 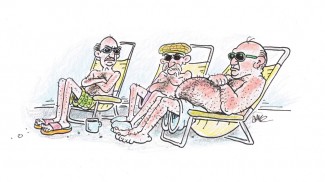 In therapy, although he is obviously correct in what his son should do, being correct has no future. We’re working on David’s accepting the reality that he is not in control, that his advice is not working, and that he must learn—as the AA oath so eloquently states—to accept those things we cannot change. David’s mood has improved and he has reduced criticizing his son, and is trying to empathize with his son’s problems, which has improved their relationship.
David now has teeth marks on his wrist!