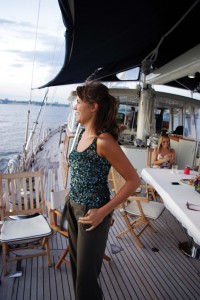 Right now, the moon is hanging outside my windows. Teenagers are palling around on the sidewalk. Acar goes thumping by. These are the last days of summer, but they are also the first of some other things.

Think tanks at Harvard, Coca-Cola and elsewhere are tapping Dabbawala, the Indian yeomen distributors, for their unique methids and we’ve got a look at their tactics in this issue. Stony Brook’s new president Samuel Stanley has taken the reigns of The Island’s largest single-site employer and Aileen Jacobson (who has just taken the reigns of our Spotlight: Q&A profiles him in her column. Alan Semerdjian’s NYC Haunts focuses on Brooklyn. And our two fashion segments buttom up for the boardroom-ladies’ and men’s ensembles that are Suited For Success.

*I’m driving in the flats in a Cadillac car,
The girls all say, “You’re a worn out star,”
My pockets are loaded and I’m spending every dime…

In general, everything we do we are doing so much faster than previous generations. Including professionally. the average resume doesn’t just list 2-3 employers, it lists 2-3 occupations. Whether or not this is a good thing remains to be seen, but what it does do is spread knowledge and practical skill sets across a broader horizon of industries. And that is a very good thing. Long Islanders are not strangers to this trend. And right now, our region is at the center of some industries poised to be promising landing pads in future years for those making a switch now. Careers V2.0 takes a look at a few that could turn a hobby or passive interest into a long-term career.

I used to shoot pool with a guy that never missed. Or so it seemed. Watch him for a while and you realize his focus is unshakable, but it’s not on the game. he followed three golden rules: 1) See the angles; 2) Take your time; 3) Don’t shoot too hard. And when you think about it, everything in life applies.

But it is easy to lose sight of this. People make bad decisions every day and some find themselves behind a syringe, instead of the eight ball, hooked on heroin. Lately, we’ve been hearing a lot about this. Yet, for all the talking, I’m not sure anyone really knows what leads someone to take a ride on the fatal horse. The truth may be that it’s different for every addict, and that’s what makes it so hard to track. the truth may be that too many of us don’t want to know the truth. It’s definitely true that until it happens to a loved one, you can’t really care about it. A friend of the magazine took an enormous leap of faith , maybe even a cathartic one, and shared his first-hand account with us. You may already know this story, but I know you haven’t seen it anywhere else, not like this. It may be one of the most important pieces we publish all year. Heroin is a true story by a reformed addict. You may know him. he could be your boss, your brother, maybe your husband. How would you know?

*What look good in the day, at night is a different thing,
nadA