Film history is often presented as a guided tour of the masterpieces of cinema. However, anyone who truly loves movies knows that some of the greatest pleasures are found on the fringes of film. In this column, your humble guide is going to lead you off the beaten path to introduce you to some unfairly neglected cinematic gems. 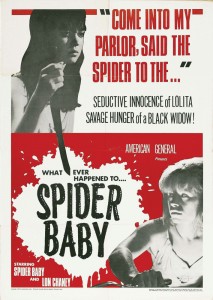 SPIDER BABY
Director Jack Hill is far from a household name, but his fans (including Quentin Tarantino) know that he always brought a twisty and creative imagination to all of his films, including the girl gang extravaganza Switchblade Sisters, and the Pam Grier Blaxploitation classics Coffy and Foxy Brown. His most unique and brilliant work is undoubtedly his 1968 horror comedy Spider Baby. The film tells the odd tale of the Merrye family, a clan that is afflicted with an unusual condition that causes them to start mentally regressing at age 12 until they eventually reach a preternatural cannibalistic state. When some greedy relatives try to get their hands on the family’s vast fortune, all hell breaks loose. Spider Baby is buoyed by Hill’s deep affection for his characters, even if they have a disturbing propensity for killing people. 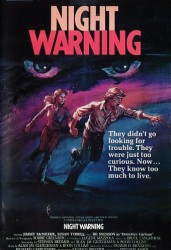 NIGHT WARNING
Actress Susan Tyrrell‘s (Fat City, Forbidden Zone, Angel, Andy Warhol’s Bad, Cry-Baby) gonzo performances are one of the great glories of American Cinema. Her presence in a film is a guarantee of mind-blowing strangeness, so when I say that Night Warning features the most insane performance of her career you should know that you’re in for a wild ride. Tyrrell stars as Aunt Cheryl, a repressed housewife who is obsessed with her hunky nephew (Jimmy McNichol). His impending departure for college sends Auntie Cheryl into a homicidal frenzy that goes unnoticed by the police because Detective Carlson (Bo Svenson) is determined to prove that the murders were committed by a “Gay Conspiracy” at the local high school. Night Warning was the penultimate work of William Asher, most famous for directing the Beach Party movies starring Frankie Avalon and Annette Funicello. 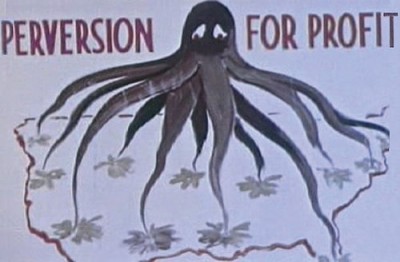 PERVERSION FOR PROFIT (Archive.org)
Horror and exploitation flicks may not get much respect, but Ephemeral Films (educational, industrial or promotional movies) aren’t even acknowledged as real movies. Still, you would be hard-pressed to find a film as funny and mind-blowing as Perversion for Profit. As an impassioned narrator inveighs against the horrors of porn, the film offers an eye-popping survey of mid-60s skin magazines. The tiny black bars that supposedly render these images decent only make them more titillating. This hilarious anti-pornography screed was produced by Charles Keating, later famous for being one of the greedy bastards behind the infamous Savings-and-Loan scandal of the 1980s. While he had no problem with bleeding our economy dry, Keating was highly bothered by sexy movies, books, magazines, and even musicals (he attempted to ban “Oh Calcutta”). Along with making it illegal to show Russ Meyer’s Vixen in Ohio, Perversion for Profit was Keating’s only lasting achievement in his crusade against smut.