Contemporary art is better when paired with fashion. People who appreciate expensive designers are likely to appreciate art.

These are two beliefs held by former fashion model and new gallery owner Oksana Salamatina. Putting her philosophy where it counts, the Russian native opened her gallery and art consulting business in the middle of designer shopping heaven—the Americana Manhasset.

A sleek shopping Mecca for those seeking luxury designers, the open air shopping center was known as The Miracle Mile, Long Island’s answer to Rodeo Drive. Designer stores include Dior, Prada, Gucci and others. If Ms. Salamatina’s hunch on the future of showing art is true, putting her gallery amid fashion heaven was a perfect move. 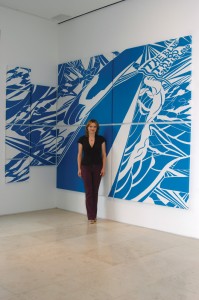 Ms. Salamatina is far from just a pretty face. She holds Masters Degrees in International Economics and Art Administration. She won a Guggenheim Foundation scholarship and has worked for Sotheby’s, Christie’s, the Nassau County Museum of Art and the New Museum of Contemporary Art.

To launch her new gallery with panache, Ms. Salamatina held nearly-simultaneous splashes in Moscow and Manhattan this spring. Both featured the exhibition, 46, XX.

46, XX featured hyper-realist sculptor Carole A. Feuerman and emerging artists India Evans, Christy Singleton and Lisa Wade. The show opened in a gritty underground Russian gallery near Moscow’s Red Square, outside of the gallery district. The gallery opened its new space on Long Island in June. The Salamatina Gallery shares a space with the Morrison Hotel Gallery, which sells fine art music photography.

Ms. Salamatina didn’t stop there. Within weeks of opening at Americana Manhasset, the gallery launched ArtWalk Americana. The effort paired a single artist with one designer store in the shopping center. To achieve the maximum impact, the artist’s visual sensibility was matched with the philosophy and visual signature of the designer. Over half of the shops participated. Artists included Robert Motherwell (1915-1991), Max Ernst (1891-1976), Dimitry Merinoff (1896-1971) and artists from 46, XX.

Group Show 2009 is currently on view through October 15. The exhibition features five artists from around the world. Dutch artist Niels Shoe Meulman is exhibiting “calligraffiti” paintings which combine calligraphy and graffiti in sublime ways. Hungarian artist and cinematographer Gyorgy Beck has a series of hand-coated silver prints on aluminum creating ethereal urbanscapes of New York, Hungary and Vienna.

Slovenian artist Gasper Jemec created a 10-canvas site-specific work for the gallery after visiting Nassau County’s North Shore. He has other paintings that are part of the show. Artwork by French photographer Nicolas Sisto, Paris-born painter Jerome Lagarrigue and American sculptor Carole A. Feuerman round out the exhibition. Following Group Show 2009 is a solo show by New York artist Marc Andre Robinson.

Each of the exhibition spaces—here and in Russia—differs dramatically from each other. What they share is a vibe that says artwork belongs there, said Ms. Salamatina. Visually, the artwork allows beauty to be a connector to the better part of humanity.

Ultimately, Ms. Salamatina believes in beauty, living in the now, taking action and making things happen. She has a passion for artists who manifest the same philosophy and for those using artistic techniques that may be outside the box. Ms. Salamatina also believes art will mesh with fashion and change the way artwork is presented in a post-recession world.

By this, she doesn’t mean the way street artists put art on clothing instead of on walls, trestles and trains. She also doesn’t mean the cross-pollination of art with advertising. What she sees is the pairing of contemporary artists and their art with fashion designer as separate but equal partners. She pointed to advertising campaigns and international news accounts of artworks installed in boutique windows to support her belief that art is converging with fashion. If this comes to pass, The Salamatina Gallery couldn’t be in a better place.

“You don’t want to be behind the curve,” Ms. Salamatina said. “You want to be there before things happen so when things change, you’re the one who’s already doing it.”