When the New York Rangers signed collegiate hockey stud Matt Gilroy and traded for NHL veteran Chris Higgins from the Montreal Canadiens, it became clear the Blue Shirts were fond of Long Island hockey products.
Gilroy, from North Bellmore, is fresh off a national championship season at Boston University, where he won the Hobey Baker Award as college’s top hockey player. Higgins, from Smithtown, is entering his fifth full NHL season, after spending the first four with Montreal, who selected him 14th overall in the 2002 NHL draft. 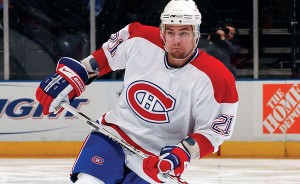 It would seem like a complete stretch of imagination to say that Long Island’s recent surge of prominence on the professional hockey scene started on the ice in Latvia. But it was there, however, where Aleksey Nikiforov honed his skills as a player in the Russian Elite League for Dynamo Riga.

The lessons learned by Nikiforov while playing in Russia have been cultivated into the same he teaches on Long Island—first at Superior Ice Rink in Kings Park and now at The Rinx in Hauppauge.
“He has a huge hand in pretty much all of the guys in the NHL now from the island,” Higgins says.

Says Gilroy, “He’s unbelievable in what he’s done. He’s taught us that to be a hockey player is not just one-dimensional. He teaches you the way to think and play in all aspects.”

Although Rob Scuderi (who grew up in Bethpage, attended St. Anthony’s High School and is Long Island’s first native to win the Stanley Cup as part of Pittsburgh’s winning team last year) hasn’t skated extensively with Nikiforov, he too has done some work with the Russian legend.

Eric Nystrom, the son of Islanders legend Bobby Nystrom, is a Nikiforov product as well. He was drafted 10th overall by the Calgary Flames in 2002 and played all of the 2008-09 season in the NHL.

Higgins, who grew up a crazed Montreal fan thanks to his father Robert, a captain of FDNY’s Engine Co. 231 in Brooklyn who played many seasons with the FDNY hockey team, it was a bag of mixed emotions getting traded from his dream team to his hometown club.

“I was shocked,” he says. “I didn’t expect to get traded. It was a big surprise.”

Relaxing at Robert Moses State Park, Higgins didn’t have his cell phone on hand when the trade was announced. But when he heard a voicemail from Montreal general manager Bob Gainey about the move, he was thrilled.

“I was completely pumped,” says Higgins, who signed a one-year deal worth $2.25 million shortly after the trade. “I always wanted to play for [the Rangers] at some point in my career. It just happened earlier than I expected.”

The unique situation for playing at home also meant the departure of longtime friend and teammate Mike Komisarek, who grew up in Islip Terrace, was a student of Nikiforov’s and a teammate of Higgins with the Canadiens. Komisarek, the 7th overall pick in the 2001 NHL draft by Montreal, signed with Toronto this off-season.

Into the picture came Gilroy, however, whose family moved off the Island to Massachusetts two years ago. 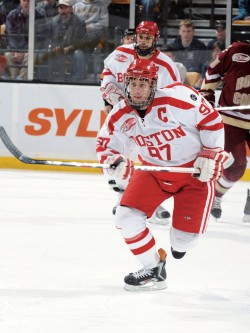 Gilroy, who signed a two-year deal worth $3.5 million, still has to make the big club’s roster out of training camp, but Higgins is confident the skilled defender will do just fine. Gilroy is the only player Higgins has any personal experience with on the Rangers, having skated together for a number of years, especially this summer.

“I really look forward to helping him get accustomed to the professional life,” Higgins says.

Gilroy was the pick of the litter and could have signed just about anywhere, but the draw to play close to his family, who are a few hours from New York by car and less by plane, helped. The Islanders—in a perennial rebuilding state as of the last decade—could not afford the unrestricted free-agent at the time.

That, plus “it’s the New York Rangers, it’s Madison Square Garden,” says Gilroy, who grew up idolizing former Boston University star Chris Drury, now a teammate of his on the Rangers. “You can’t beat it. It’s an original six team that wins and that wants to win. There are fans that want their team to win too.”

Gilroy has never been to a Rangers game, while Higgins has played against the Blue Shirts his entire career of course. In fact, he scored his first career NHL goal on the ice against the Rangers in front of his friends and family Oct. 6, 2005, in a 4-3 overtime win for Montreal.

“I was just hoping to play a solid game and not look terrible in front of my family,” Higgins said.

Nikiforov happened to be at the game. He knew before that goal that Higgins would be something special.

“My professional instinct said, ‘This kid has potential,’” says Nikiforov, who has also worked with NHL greats Alexei Yashin and Alexei Kovalev. “He is a very strong skater, has good hands, is quick and has a rapid release. He also has confidence to win one-on-one battles and go to the net.”

That confidence has led to 95 goals and 162 points in 282 NHL games. Higgins, who imagined he would stay in Montreal for the rest of his career and planned on resigning with the Habs over the summer, was also an alternate captain for them.

While the Rangers have added depth and talent to all parts of their roster from the likes of scoring threat Marian Gaborik, core forwards Ales Kotalik and Brian Boyle and enforcer Donald Brashear, it’s Gilroy and Higgins that easily must have head coach John Tortorella pleased with this off-season’s front office maneuvers.

It is not only a treat for Long Island sports enthusiasts that Higgins and Gilroy will suit up for their local team—albeit while not being fans of the Blue Shirts—but Rangers fans should be thrilled with the scoring threat Higgins provides and defensive prowess Gilroy commands.

Both players are aware the Rangers are a heavy favorite to contend for the Stanley Cup this season. Along with defending champion Pittsburgh, the Rangers might just be the team to beat. That sounds good to a couple of guys from Long Island.
“I can’t wait to get started,” says Gilroy. “It going to be pretty exciting.”