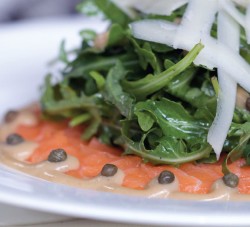 Palio’s menu doesn’t lie. Menus often feature flowery prose, exaggerations and platitudes. But the one at Palio, a stylish, sophisticated restaurant in Jericho, truthfully states: “Quality of ingredients is everything and simplicity of execution is a must” and goes on to claim “Italian cuisine simply prepared utilizing only the highest quality ingredients.” Although Palio isn’t perfect, it does make good on those statements.

The leadoff hitter at Palio is an especially dramatic, eye-catching bread basket that hold Long Island’s longest (foot long) bread sticks with a supporting cast of sturdy, crusty bread. Worthwhile starters that follow are a first-class mixed salad, a nice juxtaposition of fried and marinated ingredients (grilled eggplant, marinated tomatoes, fired leeks) in the mélange and a huge homemade half portion of gnocchi generously sprinkled with spec (ham) and mushrooms in a velvety white wine sauce. The Panzanella boasted a large fresh mix of greens, tomatoes and onions, but the Tuscan bread salad could use more of those excellent toasty Italian bread croutons.

Pastas ($18 and $20) give a good accounting of themselves. Try the lasagna Bolognese, a light, layered pleasure enhanced by its béchamel and lip smacking Bolognese sauces and the big, straightforward plate of pappardelle with harmonizing pasta sheets, mushrooms, garlic, herbs and olive oil. Non-pasta entrées sampled were a respectable herb-seared Pacific salmon and a flavorful, though slightly chewy, scaloppini of veal.

Other than a rather ordinary tiramisu, we enjoyed a tangy, light, lemony bavarese ol limone, a tall sundae glass filled with a meld of rich gianduja, pistachio and zabaglione gelato. Chocolate lovers will appreciate the Cioccolato 399, a dreamy chocolate covered and filled pill-box shaped treat.

Bring money, wine, a hearty appetite, an adventurous spirit and a laid back, relaxed attitude to the casual, seven-month-old Kitchen A Bistro in St. James and you won’t be disappointed. Chef/owner Eric Lomando is churning out some of the most creative, interesting, absolutely spectacular fare available on Long Island in his newish, sport shirt and slacks style, upscale French bistro where Mirabelle had been until last December. 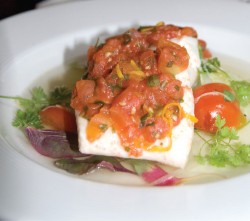 Although Kitchen A Bistro has been on the local dining scene for over a decade, its present informal venue is larger and more comfortable than the rather cramped original where smoke from the kitchen sometimes filtered into the dining room and patrons waiting for tables often had to sit in their cars until they could be accommodated.

But the dishes there were exceptional and they are as good or better now. The nearly 6,000 diners who voted in the Zagat survey ranked its food best on the Island knew what they were doing. Mr. Lomando who also owns and supervises Trattoria A Bistro where Kitchen A Bistro had been exhibits his creative flair in nearly every dish. An eggplant ravioli starter with black olive and tomato confit makes for an inspired vegetarian meld. Rarely encountered grilled figs come with a lip smacking eggplant purée given a welcome spark by a touch of blue cheese. But the knockout starter is the homey, rustic, braised oxtail, mixed with green farro topped with an egg that’s slow cooked in its shell and a thin, crisp Parmesan thiel. Break the yolk into the meat and farro for a memorable, earthy treat.

A tall, muscular, grilled pork porterhouse chop entrée is smothered in crisp browned Dijon spaetzle, an appealing veal duo of prosciutto-wrapped veal loin and soft mellow braised veal shoulder with celery is reminiscent of Mirabelle’s duck two ways as is the duck itself here. It combines the thickest (and one of the best) rare, sautéed duck breasts and roasted fig with a duck confit crêpe. Diners who seek lighter going should consider the delicate bronzini over a luxuriant fennel puree with Nicoise salad.

There are no wrong dessert turns although the rich dark chocolate snickers tart with caramel has a rubbery texture and a hard, difficult to penetrate, crust. The tangy fig tarte tartin and dense chocolate pot de crème are recommended without reservation.

On Fridays and Saturday nights (when reservations are accepted) a fixed price $42 three-course meal is served. The other five days of the week al a carte entrées cost $25, appetizers are in the $9 to $11 category and desserts go for $6.50. There is no wine list and no corkage fee for bottles brought by diners. There’s also no credit card that’s accepted at Kitchen A Bistro.

Is this then a perfect restaurant? Of course not (perfection is unattainable). Without Mirabelle’s white tablecloths, or other absorbent material, it can be ear splittingly noisy. While its wait staff is upbeat, knowledgeable and concerned, runners were on cruise control the night I visited. Dishes were auctioned off (“Who ordered the chicken?”), coffee we didn’t order was delivered to our table and leftovers we requested to take home were thrown out with no apologies.

Would any of this stop me from returning? No way! Food is the name of the game at a restaurant and it’s extraordinary here.