English writer Aldous Huxley once said that “the charm of history and its enigmatic lesson consist in the fact that, from age to age, nothing changes and yet everything is completely different.” Take the Flintstones and the Jetsons, for example. Fred Flintstone and George Jetson were very much the same guy, albeit separated from one another by a few millennia. Both were family men (one prehistoric, one futuristic); both married with children; both worked an industry job (cogs and rock quarries); both drove a car (one foot-powered, one flying); and both had pets at home (albeit dinosaurs versus dogs and robots). Nothing had changed and yet everything had changed.

So, too, has it been in green building. There’s no more striking example than the face off between Earthships and the Dynamic Tower. If you look at them side by side, you’d be forced to conclude that they couldn’t be more different. They appear to be polar opposites, an exercise in extremes and contrasts. And yet, they’re fundamentally the same thing—the height of green building, incorporating many of the same principles, but in strikingly dissimilar ways. In short, they are very different means to very similar ends. Both are largely self-sufficient, off-grid structures that incorporate recycled and renewable building materials; both generate their own power with alternative energy systems; and both have their own pioneer-cum-guru-cum-prophet. But that’s where the parallels end.

First, consider Earthships. Originally conceived in the early 1970s by New Mexico-based Michael Reynolds, founder of Earthship Biotecture, Earthships are self-sufficient, environmentally-sustainable houses made from recycled materials. The walls are typically packed earth, built up upon tiers of old car tires and aluminum cans, and finished with earth-toned facades. The homes use passive solar heating and cooling to minimize utility bills. And the off-grid buildings generate their own power through a combination of solar and wind energy. Earthships are almost always built at a grassroots, hands-on level by the homeowners and their friends, piece by piece, hour of sweat equity by hour of sweat equity. With their organic forms, natural materials, and seamless integration into the landscape, Earthships look like the kind of homes 21st century hobbits might live in.

In this sense, Earthships seem utterly primitive in a back-to-the-Earth kind of way. But from a slightly different vantage, they’re fiercely modern. In fact, they’re arguably so modern as to be post-modern, or post-futuristic. They take the waste and recycled materials of our current culture and industry, and turn them into the homes of tomorrow. To date, thousands have been built, one at a time, around the world. 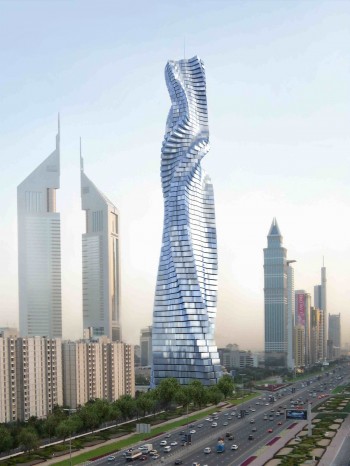 Now, compare the Earthship model to the Dynamic Tower, the latest of the ostentatious, mega-luxury development projects taking place in Dubai. The Dynamic Tower is the brainchild of architect and inventor David Fisher, who’s based out of Italy and the United Kingdom. Time Magazine named his Tower one of the Best Inventions of the Year for 2008, and the Developers and Builders Alliance named him World Architect of the Year, also in 2008. So just what is the Dynamic Tower?

When complete (estimated for 2010), it will stand 80 floors and 1,380 feet tall. The first 20 floors will house offices, floors 21 to 35 will be a hotel, floors 36 to 70 residential apartments, and floors 71 to 80 will be luxury villas. The Tower’s most defining element is that every one of those floors will rotate—in unison, in a pattern or fully independent of one another—once every 60 minutes to 24 hours. Can you imagine the possibilities for hotel promotions? “Come and reserve a room with an ocean view…no wait, city view…no wait, ocean view again.” Or, “enjoy the 360-degree view from the comfort of your hotel room as Dubai passes before your window, 90 minutes at a time.”

In between every one of those floors will be a horizontally-oriented wind turbine (79 in all) that will fully power the building and may even supply surplus energy to neighboring skyscrapers. The roof of each floor, which will have partial exposure to sunlight thanks to the gap that houses the wind turbine and separates it from the floor above, will feature photovoltaic panels. The entire tower will be prefabricated off-site in sections—each made of eco-friendly and energy-efficient structural insulated panels (SIPs)—that will be attached on-site to a central concrete pillar that serves as the building’s core.

Not surprisingly, the Dynamic Tower will have a contemporary look and feel consistent with its cutting-edge technology, not to mention the over-the-top amenities for which Dubai has become famous. Such as fully computerized control of one’s home, including touch and voice-activated features that direct everything from the rotation of your floor to the temperature to the mood lighting. There’s also an elevator for cars, so that even if you live on the 80th floor, you can drive home and park literally outside your front door.

In light of Reynolds’ Earthships, Fisher’s Dynamic Tower is juxtaposition on the grandest scale. Its monolithic and immense skyscraper stands at the opposite end of the spectrum from the comparatively modest, single-family Earthships. In the world of green building, they are the Fred Flintstone and George Jetson—seemingly worlds apart, but upon closer inspection, far similar than one would believe based on a first impression. Nothing has changed, and yet everything has changed.

Not to suggest that one is inherently better than the other. Earthships are intrinsically suited to rural landscapes; the Dynamic Tower infinitely better matched to the urban environment. Both are (or will prove to be) decades beyond their time.

Long Islanders, of course, don’t have to look far to find examples of such green building in their own backyard. From the Tribeca Green, Solaire and new Bank of America skyscrapers in Manhattan, to new LEED Platinum, carbon-neutral, net zero energy homes in the Hamptons, plenty of local examples abound. But it may be the Earthships and Dynamic Towers of the world that push the envelope most, showing just what is possible with imagination, creativity, available resources and technology.