Danish film director Lars von Trier (Breaking the Waves, The Idiots, The Kingdom, Dancer in the Dark, Dogville) has always had a reputation as a provocateur. With his outrageous plot twists, celebration of female martyrdom (though some critics feel it borders on misogyny), and regular jabs at America, not to mention his wacky interviews, there is little question that von Trier has enjoyed thumbing his nose at his critics. At first glance, his latest film, Antichrist, an art house horror film loaded with ultra-graphic violence and sex, could seem like yet another provocation, but a closer look reveals it to be his most personal work to date. 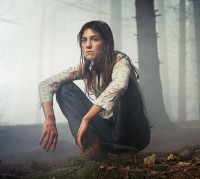 Charlotte Gainsbourg and Willem Dafoe star as an American couple (identified only as She and He) whose life has been torn apart by the tragic death of their young son, a toddler who accidentally fell out of a window while his parents were making love. She is prostrate with grief, while her husband, a cognitive behavioral therapist, takes a more “rational” approach to their loss. Ignoring the classic rule that a therapist should never treat his own family, Dafoe decides to take Gainsbourg to Eden, their isolated mountaintop cabin, and puts her through a therapeutic regimen to overcome her crippling depression. Eden proves to be a highly ironic name for their retreat as Gainsbourg’s inner (and perhaps outer) demons are unleashed, sending them both spiraling into a shocking dance of madness, talking animals, genital mutilation, and death.

In von Trier’s universe, Evil is a very real presence because he sees it as something that resides within each of us. He structures Antichrist as a clash of rationality versus insanity, and there is little doubt as to which force he sees as more powerful. Indeed, Dafoe’s therapeutic efforts are so inadequate in the face of his wife’s demonic power that the film could be read as a very bloody satire on modern psychotherapy. Von Trier has made little effort to hide his own battles with depression, which are the main reason why Antichrist is his first major work in four years.

Similar to the work of David Lynch, Antichrist feels like a barely mediated and often ambiguous expression of von Trier’s subconscious fears and obsessions filtered through the conventions of genre filmmaking, which in this case takes the form of a horror movie. With the help of amazing performances by Gainsbourg (who won the Best Actress award at the Cannes Film Festival) and Dafoe, von Trier takes us on an unforgettable journey into the rocky terrain of his psyche.

Antichrist is one of 2009’s most intense and haunting films, but it isn’t for everyone. If you think you’re prepared for the film’s extremely disturbing violence, you’re kidding yourself. Halfway through a recent screening at the New York Film Festival, the film caused a man in the audience to have a seizure. However, movie lovers with cinematic nerves of steel will need to see this newest work from one of the most audacious filmmakers of our time.