Lovers always have been stressed trying to break the code about whether or not their love was reciprocated. Indeed, in approximately 800 BC, Homer told how Penelope, Odysseus’ wife, gave mixed signals to her suitors while he was away. They had to read subtle signs of intent. That has even gotten more difficult now. Men declared everlasting love so women would have sex with them and women were stressed out trying to interpret intentions. And women flattered and flirted for marriage, especially to wealthy and titled men, and the men had difficulty determining whether the love was for the person or his assets.

Breaking the code is stressful. There is a great deal of psychological research indicating that ambiguity in important areas is more stressful even than receiving bad news. Researchers have found that humans became far less anxious when they knew an electric shock was coming than when they were shocked without warning. Indeed, difficult discriminations are stressful. In an experiment by the great Russian physiologist Pavlov, dogs who were given mixed signals of whether they would get fed or not were so stressed that they would defecate. The drama of this, and other, experiments is that no punishment was involved. Yet, Pavlov’s dogs were so upset that they tried to leave the lab, but were leashed in.

Now, back to relational issues. Laurie, a 25-year-old, bright and pretty client is getting fed up with the relationship game. She has no problem meeting guys, but has problems breaking the code and reading their intentions. Although this is hardly a new problem, it is even more difficult now than in Shakespeare’s times. She hooks up with guys she meets at clubs or through the Internet and she has enjoyed being with them. They, in turn, give Laurie every indication that her feelings are reciprocated. They smile at her humor, are affectionate, flatter, and have hooked up with her. Laurie is tired of the exploration scene and is now interested in a more stable relationship. On several occasions, she has felt that the relationship had promise. Yet, these relationships, without warning, have vaporized. Laurie has felt sandbagged by their vaporizing without warning signals. One fellow whom she liked texted her to meet at a bar and didn’t show. When she texted “where are you?” the schmuck replied that he was busy. 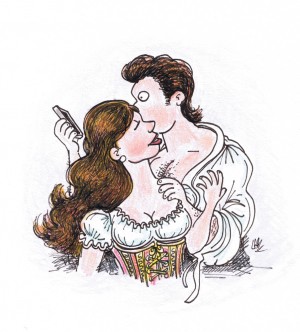 Even though relationships have not changed much over the ages, communication methods have. Before, most of the communication was face-to-face where there were signals of intent. Certainly love letters and notes were used, but they were slow and usually, I suspect, to arrange meetings. Now, with text messages and emails, there is a vast cyberspace between parties. Laurie, who doesn’t even like using her cell phone for voice communication, estimates that she gets over a thousand text messages a month. Texting doesn’t allow for interpreting body language or voice tonalities. I can picture a guy focusing on TV while clicking affectionate lingo messages to a remote phone rather than a person with feelings.

I’m trying to convince Laurie that being open and honest is a strength and not a weakness. Being receptive and wrong in her assessment is an age-old problem. When schmucks let her down, as they have, it is because of their problems and not due to weakness and vulnerability on her part. Still, since Laurie is human, it does hurt.