Burton & Doyle is a new-old, modern-traditional, conventional-cutting edge steakhouse. Although this Great Neck destination restaurant has been around for a number of years, it has new owners, a newish chef and a menu dotted with European and Asian spins and twists. Yet, it still offers all the expected steakhouse favorites including porterhouse ($42), rib eye ($46), sirloin ($43) and filet mignon ($42) steaks (not to mention Wagyu cuts priced from $85 to $160 each) plus shrimp cocktail, creamed spinach, whipped potatoes, Caesar salad, crab cake, onion rings, French fries, etc. But diners will also find an extensive array of sushi, sashimi, rolls and specialty rolls.

The menu also offers dishes like an appetizer of calamari Thai style and another of potato gnocchi. Among the recent daily specials were chorizo sausage with red bell pepper, shrimp risotto and a black trumpet mushroom and Brussels sprout ragout.

And how many American steakhouses employ accomplished French chefs? Burton and Doyle does. Yet, inside, Burton and Doyle retains a reassuring milieu. Its masculine, dark wood interior with beamed ceilings, massive pillars, candles, leather banquettes, subdued lighting and a scattering of jumbo-sized wine bottles continue to signal to steakhouse aficionados that this is the kind of place they were looking for.

Old line steakhouses are also pricey and noisy. While Burton and Doyle is both, nearly every dish is on target. Its huge minerally prime steaks are juicy, tender treats. A green grocer-fresh watercress salad, studded with pecans, pears and Gorgonzola makes for an exemplary starter. So does an accurately named lump crab cake. Perhaps best of all was a pretty-as-a-picture presentation of tuna carpaccio, enhanced with a red, black and green panorama of cherry tomatoes, Calamata olives and micro wasabi greens. Nor should all those nice fresh sushi, sashimi and roll possibilities be neglected. 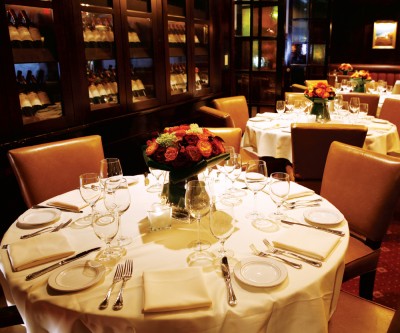 Diners who decide to pass on the red meat, but still want a hearty entrée, will be well satisfied with the generous portion of soft, sensitively-seasoned roast rack of lamb while those who want something lighter can opt for the Branzino, a flaky, white fish escorted by tiny Manila clams, potatoes, cherry tomatoes and Calamata olives.

The four predictable desserts at meal’s end were a rich, creamy cheesecake, a crisp crusted crème brûlée, a sweet rather than tangy key lime tart and a warm, runny volcano-style chocolate cake.

Service at Burton and Doyle is always concerned and affable but not always swift and polished. Breadbaskets aren’t always replenished or replaced. On busy nights, there are some gaps between courses and patrons often have to order wine by its number rather than its name.

Huntington is a hot restaurant village. Diverse, excellent, eating places of all stripes, nationalities and price ranges dot nearly every block. It seems as though the last thing the village needed was yet another one. But there’s always room for a restaurant as ravishing, interesting and well-run as the two-and-a-half-month-old Porto Vivo. This stylish, sophisticated, though noisy, Italian spot that replaced the Gerard Street Antiques store is a modern three-story affair (60 diners downstairs and 60 upstairs with a slick lounge in between) of soaring, beamed ceilings, bare floors, high windows, a wine cellar tasting room, wrought iron light fixtures and plenty of bricks and glass. A huge bouquet sits at the center of the room, glass lines the staircases and there’s a fireplace in the attic-like upstairs dining room (even the bathrooms are pretty.) Servers wear the obligatory black in this hip milieu.

The team at the top of this enterprise is equally impressive. Owned by Joy Mangano of The Home Shopping Network and more importantly Philipp Seipelt, a classically trained Swiss restaurateur. Steven J. Lecchi, a veteran CIA trained executive chef who has seen previous service at big name American and Italian restaurants, is the kitchen commander.

A recommended colossal portion of soft, moist, fork-tender osso buco is the Saturday special of the day. A tasty, though pricey ($36), mix of lobster and shrimp ravioli isn’t the usual pasta packet but an open brown-buttered version containing chestnuts, pancetta, mushrooms and squash in a vanilla lobster sauce. A crispy, full-flavored Long Island duck lived up to its name. Accompanied by vibrantly-seasoned red Swiss chard, this generous-portioned bird offered fanned out slices of breast with a leg and thigh. Grilled Branzino didn’t fare as well. Although hot plates are generally a good way of keeping food at proper temperature, they continue to cook thin fish resulting in a dryish overcooked dish. 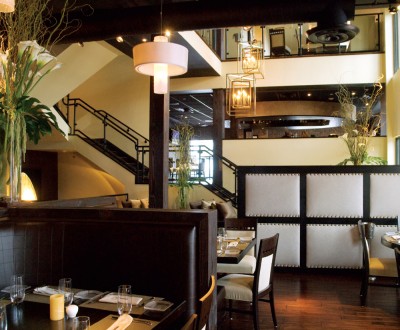 Desserts and service were a mixed to good bag. The house made sweets were a gossamer, first-class, deeply flavored chocolate soufflé, a standard ricotta cheese cake, a Sundae-like tiramisu and an apple-almond tart of nice, ripe fruit but rubbery, difficult to penetrate crust.

Servers are informed and concerned but didn’t always serve dishes to the diners who ordered them and made a dessert substitution without first informing the patron who ordered it that his original choice was unavailable.