Food is a passion. It’s an art. It’s our connection to a feeling that everything is going to be all right. Nothing satisfies like a good meal. Nothing makes a moment like a uniquely prepared dish that nourishes all the senses. There are some people who know this. But there are only a rare few who make it their religion. The chefs and restaurateurs on the following pages are naturally so good, so tireless, so inventive there seems to be no limit to what they can do. They’ve served us some of our greatest meals, hosted our most special occasions, been there like good friends whenever we’ve needed rescue from our hectic lives. It’s time they took a bow. 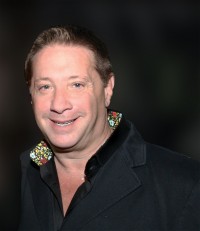 Steve Carl has been at the helm of Carlyle on the Green for eleven years, and at the forefront of the catering business for over two decades. Carlyle is not only a dream location at which hundreds of brides set their weddings every year, it is also the spot for Long Island’s most important corporate, community, fundraising and social affairs.
“Treat your clients like gold…Don’t sweep anything under the rug,” are two of the credos that have kept the Carlyle operation at the vanguard of this business. Steve’s attention to every detail, his keen sense of the extraordinary and his personal style and flair are the others. But his enthusiasm for great catering doesn’t end there.
In 2006, Trump on the Ocean, his partnership with Donald Trump was announced, and that project continues in its development. Last month, Steve announced his acquisition of Race Palace (Plainview). His plans for the storied venue are vast, and will no doubt catapult it to the same heights as his previous endeavors, “Race Palace is a diamond in the rough,” he said, “The sports and racing upstairs are one set of attributes. The expansive dining area, kitchen and endless possibilities downstairs are another. Our experience operating Carlyle at a premier golf facility allows us to bring a level of sophistication to this exciting landmark.”
The most remarkable thing about Steve is that he is an all-around Mr. Niceguy. He is hardworking, enterprising and inexhaustible in his ambitions, but he considers his children his greatest successes. 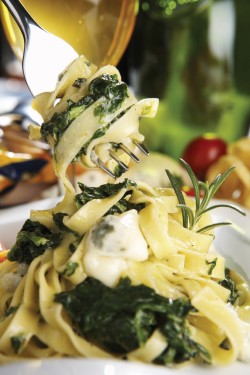 It takes a lot to be world-class: First-rate training, international experience and steady, consistent expectation of excellence. The dynamic duo of owner Roberto Ornato and chef Tito Onofre delivers this and so much more daily—they won’t settle for less. Italian-import Ornato cut his teeth at Manhattan’s famed Cipriani and brings this level of sophisticated dining to his casual, warm and friendly Mediterranean inspired restaurant. Chef Onofre traversed dining culture of his native Peru, South Beach (Fl), SoHo and The Hamptons where he wowed some of the world’s most discerning restaurant goers by fusing local inspirations with his own palette.
Jonathan’s doesn’t disappoint. Every time you order the pumpkin ravioli, mushroom risotto, orecchiette or fritto di carciofini (sautéed baby artichokes), all of which make regular appearances on the menu, you can expect the delectable preparation you experienced on your previous visit.
The bar is a marble topped mahogany affair that has a sense of being set off from the dining room thanks to some strategically placed mahogany pillars. The wine list is par excellence—it suits the venue as much as the food. Meeting friends for drinks at the bar is a perfect introduction to an evening at Jonathan’s.
Jonathan’s is a perfect backdrop for business lunches or dinner with friends. The ristorante is the hallmark of grace and style, serving some of Long Island’s best Italian cuisine in a relaxed, but elegant, atmosphere. 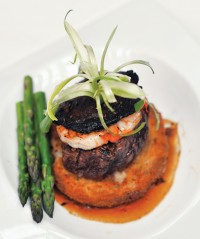 Bob’s Place has a reputation for being one of the finest restaurants in Nassau County, offering its customers extraordinary food at a reasonable price. The restaurant pulls all the stops in presenting a distinctive, unpredictable dining experience—each entrée is served on a uniquely styled plate, no two plates at one table are the same, and seasonal elements are always part of the tablescape.
Bob Manning bought the restaurant in 1989, when it was the famed Gebhardt’s. Although he thought the original name and culinary concept still had value, he added “New American” to the menu to match the broadening of the locale’s original German influences. In 2007, he changed the name of the restaurant to Bob’s Place to fit its familiar, casual and chic feeling.
Bob’s Place changes its menu four times a year to coincide with the change of seasons. Presently, the fall menu includes newer items such as crabmeat Napoleon, broiled tilapia filet, braised pork Osso Bucco and customer favorites such as the soup of the day, four way tuna sashimi, grilled marinated skirt steak, roasted garlic crusted lamb rack and blackened chicken breast.
Bob’s Place has also begun to feature a monthly Chef’s Table event, in which Executive Chef Jeff Eutsler will prepare an elegant seasonal dinner, pairing courses with wines selected just for the evening. Chef will be on hand to share some of his secrets in preparing the menu items and Bob’s Place General Manager Gabriel Moroianu, a certified sommelier, will explain the wine pairings. 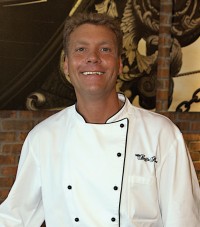 Steven J. Lecchi’s passion for food was cultivated at a very young age. Growing up in a traditional Italian family, he spent many hours in the kitchen creating fresh pasta with his mother and grandmother. Upon graduating from the Culinary Institute of America in New York, Lecchi secured his first position in the kitchen of the famed Lespinasse St. Regis Hotel under notable chef Gray Kunz.
After deepening his culinary skills at this four star Manhattan toque, he headed to the tony Hamptons, landing at Southampton’s Basilico. Following this, he returned to his roots and spent six years in Europe exploring authentic Italian fare and cooking at several notable Italian restaurants in the Emilia Romagna and Tuscany regions. In 2006, Lecchi returned to the United States flush with Italian cultural and culinary experiences and was hired as a private chef for celebrity couple and musical icons, Marc Anthony and Jennifer Lopez. During his tenure as chef to the stars, he traveled, cooked on video sets, presented meals to numerous celebrities and gained much experience perfecting his skills for a high profile family.
In early 2009, Lecchi was hired to open Huntington’s newest hot spot, Porto Vivo. Lecchi’s vision at Porto Vivo is to present an incomparable dining experience. He has created a rustic Italian menu with emphasis on quality and freshness. From the fresh pastas such as handrolled goat cheese and ricotta gnocchi to the certified angus prime dry aged steaks, the menu is both inventive and appetizing. Lecchi’s culinary experience and dedication to cuisine shine through at Porto Vivo, landing the new hot spot among the best on Long Island.