Even at 19, the Islanders’ John Tavares is a pro at this—the meet-and-greets, the pictures with fans, the autograph requests, the media interviews. He’s generous with his smiles and thank-yous. Back home in Mississauga, Ontario, an undeniable buzz has surrounded Tavares since he entered pro hockey at age 14.

But this is different, right? This is New York, where Hall of Famers and up-and-comers are chewed up and spit out by muckraking newsmen and radio personalities who build them up and tear them down all in the same day. In no place do the lights shine brighter than Broadway—except in the hockey world. The truth is that the big top is more like a rural neighborhood to Tavares. New York pales in comparison what the 2009 No. 1 overall draft pick faced in puck-hungry Canada.

“It’s a country that has a great passion for hockey at all levels really,” Tavares said. “In a sense, I’m able to get away and not be around it so much. You definitely enjoy the support and attention you do get because people have such a great passion up there. It’s good and it’s bad in its own way.”

He’s a 6-foot, 195-pound center with the weight of an entire franchise and fanbase on his shoulders, a notion to which coach Scott Gordon replied, “I don’t think you’ll find an 18- or 19-year-old better suited to handle it than John Tavares.” The Islanders haven’t won a playoff series since David Volek’s clinching goal over Pittsburgh in the 1993 Patrick Division championship series. Tavares wasn’t even three years old then. Now a teenager, he and the other young guns—Kyle Okposo, Josh Bailey et al—along with veterans like Doug Weight, Trent Hunter and Mark Streit are in charge with recharging an Islander fan base in desperate need of a pick-me-up.

“There’s nothing like winning,” Tavares said. “Competing for the Stanley Cup, I haven’t experienced it yet, but I get the sense from all the veterans how special it is to get there, to compete and hopefully win one is an amazing experience. We’re all really focused on proving some people wrong and being competitive this year.”

The credentials are all there for Tavares to be a star in the National Hockey League. He is the youngest player ever to be drafted into the Ontario Hockey League (OHL), having petitioned for entry a year early at age 14. Tavares set the goals record for a 16-year-old with 72 in 2007, topping the immortal Wayne Gretzky from the top spot and registering a full 18 more than Sidney Crosby at the same age. Before he was finished, Tavares broke a 33-year-old mark for career goals with 214. In January, he led Canada to its fifth consecutive gold medals at the 2009 World Junior Championships, winning Most Valuable Player honors by tallying eight goals and seven assists over six games.

He’s the next big thing. Of course, calling Tavares the next Gretzky would be unjust for even the most highly touted prodigy; only one active player (Mark Recchi) is even halfway to The Great One’s scoring mark of 2,857 points and Mark Messier (1,887) is the only one within a thousand. But Tavares can be good. He can be very, very good. 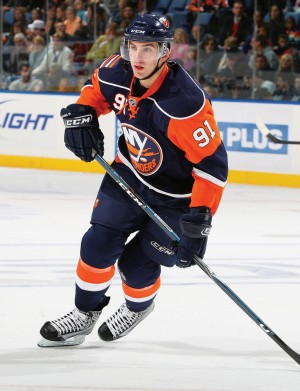 “With his hand skills and his play around the net, I don’t think there are too many players that can play up to the standards that he’s built,” Gordon said. “I think our fans will identify that pretty quickly.”

Of course, the Islanders have drafted their share of studs and duds, but it’s rare that the stars have come up through the system and made a significant impact with the pro club. Wade Redden (1995) was shipped to Ottawa where he was twice an All-Star.

They worked another deal with the Sens, trading Zdeno Chara later that year and the No. 2 pick—ultimately Jason Spezza—to Ottawa for Alexei Yashin. Chara and Spezza became stars and Yashin was overpaid and underwhelming. The Isles’ first pick in 1997, Roberto Luongo, was dubiously packaged with Olli Jokinen in a deal with Florida for Mark Parrish and Oleg Kvasha. That’s just the short list of bad beats—Todd Bertuzzi, Bryan McCabe, Eric Brewer and J.P. Dumont have all shined in other locales.

It didn’t used to be that way. Two decades ago, the Islanders had four straight years—1988-1991—in which a draft pick went on to record a 50-point season with the pro club (Marty McInnis, Vladimir Malakhov, Travis Green, Zigmund Palffy in that order). They haven’t had one since. So where does Tavares fit? He scored his first career goal and assist on opening night, pumping his fist and bringing the Coliseum crowd to its feet. He’ll become a household name all right, either as the guy who did or didn’t live up to the expectations. What’s guaranteed is that, whether he likes it or not, he has our attention.

“I love the game no matter what people are saying,” he said. “I can only control what I do on the ice and how I handle myself. I just want to focus on what I have to do each and every day to get better.”

He calls Long Island home and he wouldn’t have it any other way. “Out here, I can get away, relax, just be myself and enjoy being a kid and playing in the NHL.”