Photographer Ethan Russell prefers to let his pictures do his talking. In a rare interview, the only photographer to do an album cover for the Beatles, the Rolling Stones and the Who, who took the last pictures of the Beatles together, and author of the seminal, criminally out-of-print Dear Mr. Fantasy has just published his latest book, Let It Bleed: The Rolling Stones, Altamont, and the End of the Sixties (Springboard). Russell was also involved in the just released reissue of the Rolling Stones classic live album Get Yer Ya-Ya’s Out: The Rolling Stones In Concert 40th Anniversary Deluxe Box Set (ABKCO), now available as a three-CD/DVD expanded edition. 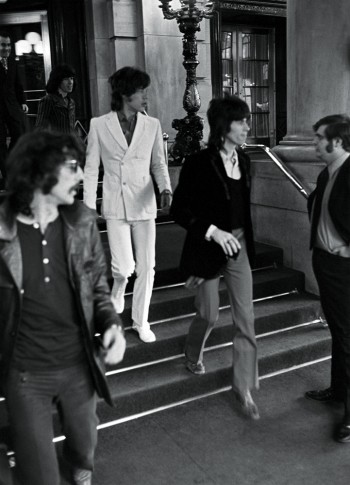 Q: You met the Rolling Stones in 1967, but when did it become a situation where you were taking pictures of them as part of a specific job related to one of their projects? Was it the film the Rock and Roll Circus?

Q: Did you ever think that it would take so long for the film to be released?

A: I don’t know how one could have predicted that. Obviously no one knew Brian (Jones) would die. Also I find that when one looks back it’s easy to ask the question “why,” but at the time you are busy and keep moving on.

Q: Some of your photographs came out long before the film though. Were there many photographs that were not released for some time because the film was held up?

A: There was no relationship. I’m the culprit. I was busy doing the next thing and not proactive at pushing my pictures out. Right after the Circus, for instance, I started Let It Be. The unintended consequence–about those photos and many others–is that I have had the opportunity now to publish them in a way that allows them to be seen as history, and
that feels good to me.

Q: Did you think the Rolling Stones performance was really so bad? It’s always been thought they held the film up because they didn’t like their performance. Did they ever communicate to you why the film was held up initially or over the years?

A: To answer the questions in reverse order: no, they never communicated to me about it. I’m sure I heard speculation but it was of the nature you allude to: that they didn’t like their performance. One thing the pictures show is how exhausted Brian looks by the end of the night. I think it was like a 22-hour shoot. Brian looks fine in the pre-Circus parade but is completely drooped by the time the Stones come on. And I thought they were fine at the time to be honest (I could easily have been wrong). I was a fan, really, and I was impressed by them.

Q: Did you end up working next photographing the Beatles for the Let It Be sessions due to your work on the Rock and Roll Circus, especially given that Michael Lindsay-Hogg was also the director of both films?

A: I think there is no question that my friendship with all the surrounding people was a factor. I was friends with Michael and Glyn Johns who was recording both, and Tony Richmond the cameraman. But there was also a separate timeline where I had photographed John Lennon and Neil Aspinall had called me up to see those photos. So they were aware of me independently.

Q: It’s striking how different the photographs you took from the two different films are. How did you choose to film the Rolling Stones in black and white and the Beatles in color?

A: It’s your lens on it. I probably did shoot, proportionately, more color of the Beatles but the decision was to use almost nothing but color (partly because the Twickenham stuff was so colorful). But the ratio was more equal than not.

Q: Was Let It Be as horrible as everyone made it out to be? There seems to have been some very good music made and there was obviously a large volume of music recorded.

A: “Horrible” doesn’t seem like an appropriate word, in fact inappropriate. There was tension. But I didn’t have a basis of comparison not being in other Beatle sessions. The thing I still find remarkable is that the biggest group in the world had such a solid work
ethic that they would show up at 9am–which really means they had to be up at 6 or 7 to get there–it was out in Twickenham…Imagine trying to find a group–especially a successful one–to do that today.

Q: How did you feel about the Let It Be booklet? Was there ever a chance it would be released in the United States?

A: I still like it. Like all my work at the time it was intimate and unposed. It was supposed to be released in U.S., but I heard Allen Klein negotiated it away (you’d have to ask them). I think it’s possible Apple may release some version of it one day.

Q: How did what became the final photo shoot of the Beatles come about, what do you remember about it and did you know it was to be their last?

A: The final photo shoot with the Beatles was booked as a session without–as far as I knew–a particular focus. I set it to be in the same studio in London that I used to shoot the Rolling Stones Through the Past Darkly but was changed at the last minute to be at John’s house in Tittenhurst. Of course I had no idea it would be their last. I remember the Abbey Road acetate was brought to the house and played as the very last snaps of them were being taken, but who knew.

Q: You quickly rejoined the Rolling Stones world. You photographed Brian at his home in Cotchford Farms in 1968. What was he like then? Were you around while Brian Jones was being pushed out of the group and what do you remember about this seismic change in the group?

A: He was always pleasant to me but you can see in the photographs that his life was taking a toll on him. I was too young–we were all too young–to really imagine it would take the toll it did.

Q: Given the size of the Rolling Stones free Hyde Park concert were you surprised it was relatively trouble-free?

A: No. I didn’t have any expectation and there was no indication from other shows–to the extent there were similar ones–that there would be a problem.

Q: Was there any sense of what was to come at Altamont?

Q: Did you have any sense of how Altamont was going to turn out?

A: I don’t know how to answer this. “Altamont” the specific venue wasn’t even known until three days before the concert. There was no precedent. To the extent there was a precedent: in the Sixties people tried things out, asked questions later, they were consistently chaotic but successful.

Q: Did you photograph all the bands who played that show?

A: No. I arrived on the second helicopter with Bill Wyman, probably around 3pm, and left with them when they left. I didn’t shoot–or see–anyone else.

Q: How soon were you able to see your photographs after the show and what stood out to you given what happened?

A: I was in shock like everyone. I didn’t really exhaustively deal with it until my Let It Bleed book, which took six years. I like that ultimately my perspective was more historical, had more distance.

Q: Did you have any apprehensions about working with the Rolling Stone again after Altamont?

A: Absolutely not. But everyone was very alert to the possibility of violence on the 72 tour. There were layers of security.

Q: How did you feel about Gimme Shelter? What was your relationship with the filmmakers during the tour?

A: I felt liked I’d been kicked in the stomach. It’s overwhelming. I interacted with them somewhat. We were all working. They were latecomers to the tour. I’d been there the whole time. I didn’t really know how exceptionally good they were.

Q: Have you ever read A.E. Hotchner’s book Blown Away: The Rolling Stones and the Death of the Sixties, If so, what did you think?

A: No. Someone warned me off it. Don’t know why.

Q: You were around for what many feel was the tour that produced their best live album. Was it their best tour from a musical standpoint? Do you feel that Mick Taylor was not really given his proper due considering how rich the period was when he was in the band?

A: Not only was it a fundamentally solid “music tour”—it was at a time that music (not celebrity, not all the later nonsense) is really what mattered, what was front and center. For the Stones it was the first time people actually sat down and listened. I admit to a particular fondness for the Mick Taylor years (that and the Brian Jones years). But that’s me. As for MT’s due? He’s got mine.

Q: You were also involved in the 1972 tour. Were there any other photographers on that tour? There had been reports that Truman Capote was on the tour and was going to write a book? Is that true?

A: There were a lot of photographers on that tour. Me. Annie Leibovitz. Jim Marshall. Robert Frank (though he was filming). Yes Capote was there. Also Terry Southern. Capote never wrote anything.

Q: Do you consider Get Yer Ya-Ya’s the best live rock album ever?

A: I don’t know a better one. (Another spectacular one, Otis Redding, comes to mind).

Q: How involved were you in this new reissue?

A: I had a lot to do with the included book, words and photos.

Q: Have you been involved in Rolling Stones reissues in the past?

Q: What sort of relationship do you have with the Rolling Stones today?

Q: It’s been a while since you’ve published a book. How different are the two versions of your Let It Bleed book?

A: It’s the same core story. One is collectible, big and exhaustive, and a work of art (that phrase comes from customers. By many accounts the best Stones book ever). The other is a good book, very well produced, and a really great value. They share many of the same photos.

A: I wasn’t trying to create a uniform style. Personally I was very attached to the singer/songwriter as writer and I tried to make photography that expanded that. I could be very studious in my pursuit but–like Who’s Next–the unexpected moment could trump everything.

Q: How closely did you work with Pete Townshend on Quadrophenia and how long did it take?

A: I worked very closely with Pete but not to the degree he knew the content or commented on the actual photographs before or as they were taken. I can’t remember how long: I guess six weeks. I lost fifteen pounds doing it. It was intense.

Q: Dear Mr. Fantasy was such a great book, not just because of the photos, but because of your extraordinary story. Will the book ever come back in print?

A: Thanks. Seems a little naive, awkward “first book” to me but it’s solid in its direct way. It’s heart felt and a good story. It’s possible there will be another edition but no date or publishing plans yet.

Q: Are there any other photographers that also took many pictures of rock artists that you especially like?

Q: What upcoming projects will you be involved with?

Q: What’s your favorite album or albums of all time?

A: Oh, I can’t. It’s the totality of them. Stones, Beatles/Lennon, Dylan, Who. But none of them exist without early rock n roll: Chuck Berry, Elvis. And really I think without Bob Dylan the others don’t reach the heights that they do. I’m an American and I see Dylan as the DNA.