The primary business in this large happy family is high school basketball. Jack started it. He is the second oldest son, one of nine children, and the head coach at Amityville since 1988. “Everybody else worked for me at one time or another,” he admits.

By everybody else he means his younger brothers Tony, Jr., Chris and Mike. Tony, Jr. is the basketball coach at Newfield after starting his career in Islip. Chris is in his fifth year as the head coach at Harborfields after a stint at Oyster Bay. Mike, the youngest, coaches football at Eastport-South Manor, but he knows hoops, too, having coached at the college and high school level for a number of years. “Mike actually has the best basketball mind of all of us,” says Jack. 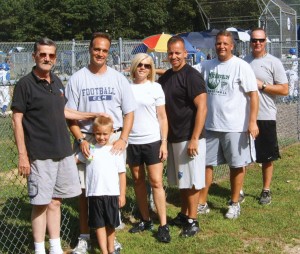 The Agostino men learned the game from the Centereach former head coach Bob McNeely—whose own son Ryan now coaches Centereach. Each believes in man-to-man defense. The out-of-bounds plays all came from Jack, whose Amityville teams are also known for the suffocating full-court press they employ in their small gymnasium. The brothers admit to an evolving admiration for half-court offense, slowing tempo to pick apart a defense. They are enthusiastic on the sidelines during games, not ref-riders. Their players like to play for them, and they are competitive with each other.

“Chris and I have a two-and-two record against each other,” said Tony, Jr. “I’ve never beat Jack’s team. Chris, either.”

All agree Chris might be coaching the team to beat this year. The brothers think the Harborfields Tornadoes deserve the number-one seed in Class A this season while Amityville could be ranked as high as two, right behind them. Speaking of Amityville, UConn star guard AJ Price is considered the best player to ever play for any Agostino—so far. During the summer season in the Town of Brookhaven League Chris gave Tony a beating, and Tony, without his star, never looked at the other bench for fraternal mercy. Summer league doesn’t count, anyway, at least not in the way the Agostinos tally their head-to-head matchups.

“Half Hollow Hills West is the team to beat in Class AA,” says Tony. “Walt Whitman with Myles Jones will be a force. He’s a great player and a great kid. We’ll be competitive in our division, because we have a lot of guys coming back, but unfortunately the one guy we graduated was our best player last year.”

This family knows they are blessed as they lean on the third-base fence to watch some of the nineteen Agostino cousins play baseball at the PAL Center in Holbrook as summer draws to an end. They may be competitive, but they are also close-knit. They gather regularly at mom Ann and dad Tony Sr.’s house for pasta and they follow each other’s careers. When asked if they are happy with their lives, the only complaint comes from Jack, who wishes he could putt better. Everybody else ranges from happy to extremely happy with their lives, their wives, and their careers. Between baseball games they pile into large vehicles and fill up a local bagel store for brunch.

Tony, Sr., the father of all these happy coaches, has a ready answer when asked to assess who among his sons is the best field general. “Each one is better than the other,” he says.