A longtime guitar player and a rising record producer are sitting around doing what they love best, talking about guitar players. During the heated talk, the two are discussing the night at Madison Square Garden a few years ago when Eric Clapton was playing.

Guitarists Derek Trucks and Doyle Bramahl III were in Clapton’s band and opening act Robert Cray also came out and played with them. Of the four guitarists on stage, the one they thought was the best was Robert Cray. That’s taking nothing away from the other three, and on any given night, I’m sure Clapton would be the unanimous winner. Cray, however, is surely one of the greatest guitarists of his generation and when he emerged in the 80s, many felt he single-handedly revived the blues. What he isn’t, though, is merely a revivalist. As one can hear on his new album, This Time (Vanguard), there’s also soul, rock and r&b, along with great singing and songwriting. Cray himself shies away from just being a traditionalist. “It would be real easy to go into the nostalgic kind of thing,” he began during our interview.

What amazes those who follow Cray closely is how minimally the effects and gear he uses comprise the essence of his style and sound. Cray agrees with the observation. “If you’re a guitar player and you’re not at the microphone, I guess you have time for that,” he stated. “I was never really into it anyway. In the early days I just wanted a wah-wah pedal and a fuzz box (laughs). I wanted to play like Jimi Hendrix.” Another guitar player who was and is a major influence is B.B King. “If you don’t understand where he comes from, you can’t really have a conversation in your music,” Cray stated. “B.B. is a conversationalist. Most of the time he doesn’t play a lot of notes, but you get the message, or you wind up just blabbering and playing too many notes and not saying anything.” Cray also cited Otis Rush, Albert King and Albert Collins as influences. Cray made the classic album Showdown with Collins and Johnny Copeland. 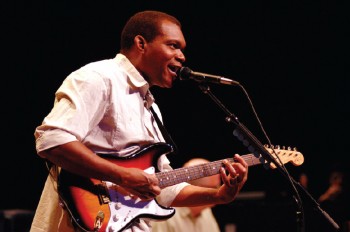 Cray has gotten to play with other legends, including B.B. King and John Lee Hooker on King’s album Lucille and Friends in 1995. He enjoyed listening to the two swapping stories about when they were hanging out at Hooker’s home in Detroit in the late 40s. Cray also played with the Rolling Stones several times, including on the Voodoo Lounge tour and with Keith Richards, in the film Hail, Hail, Rock & Roll. The film was not Cray’s first foray into making movies. He was one of the members of the band Otis Day and the Knights in Animal House. About the film, he said he had no idea it would be so big and that he was lucky enough to have spent a lot of time with John Belushi. At the time Belushi was having fun doing his Joe Cocker impersonation, but he became close to Curtis Salgado, who was playing with Cray at the time. Salgado taught Belushi a great deal about the blues, which became the impetus for The Blues Brothers.

Cray holds a special place in his heart for Clapton. “He’s open and a very straightforward guy,” he stated. “He has a good time playing music. He’s been trying to retire for a while but can’t do it, because he loves the music.”
With all the talk about guitars, guitarists, gear and styles, in the end Cray said, “Everybody has their own approach, touch and feel. The sound you get, you get from your hands.”