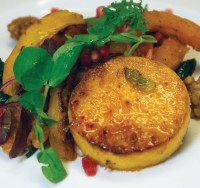 Kitchen A Trattoria is perhaps Long Island’s most unlikely success story. Located at the end of a little hard-to-find strip shopping center that runs perpendicular to Route 25A, it goes unseen by most who pass by. Its 25-year-old chef, Eric Bolyard, never attended a culinary school and brings scant experience to his present post. He worked a few months at the long defunct Collage in Huntington and then was thrust into the sous chef spot for three years at Kitchen A Bistro where Kitchen A Trattoria is now. His boss, Eric Lomando owns both. This BYOB, no credit card, cramped spot still has uneven floors, no place for waiting and an open kitchen that puts chefs almost in the laps of diners. Yet it is one of the few Island restaurants that provides more than it promises. Since its opening about nine months ago, it has deservedly received raves from critics and diners alike. Patrons more interested in good food and wine than elegant surroundings have given it the same enthusiastic reception they did its predecessor.

Although Kitchen A Trattoria bills itself as “rustic Italian” and some of the dishes do fall into that category (nearly all the pastas, assorted salumi and braised rabbit leg), this is no pizza and pasta joint. An appetizer of black figs, pancetta, goat cheese and strands of pistachio bread is more refined than rustic, as are grilled octopus with marinated chick peas, roast quail stuffed with braised duck and fig agrodolce (a sweet and sour compote), and olive oil poached white tuna with a roast garlic-white bean purée. Nor is an extra virgin olive oil cake escorted by candied orange slices, a dessert you’re likely to find at a typical neighborhood Italian eatery.

The easy-to-take tab for all this fare makes Kitchen A Trattoria even more of a find. All pastas are $12, entrées go for $17, six of seven sweets are priced at $6, three pre-entrée nibbles (ricotta, olives and tapenade) go for $4, and some bountiful portions of antipasti are listed at $9 and $11.

Peasanty, crusty bread that’s quickly replenished greets diners. The olive oil is in an order of assorted olives was ideal for dipping that bread. That black fig, pancetta, goat cheese, pistachio bread starter offers welcome taste and textural contrast while a hefty portion of baked penne paita with buffalo mozzarella yielded a robust flavor punch. Less encountered torchio pasta with local corn, mushrooms and shrimp in a shellfish sauce was even better. A special of flaky, lightly battered zucchini blossoms, stuffed with corn and gorgonzola nearly floated off the plate.

Entrées to remember: The soft, plump seared sea scallops; the juicy braised rabbit leg with shitake mushrooms boasting nutmeg and rosemary notes; and that roast quail stuffed with a satisfying meld of braised duck and fig agrodolce. The tasty but tiny seared lamb porterhouse is but a spear-carrier in a dish that’s dominated by unmentioned spicy lamb sausages. Its accompanying heirloom tomatoes and eggplant as well as most of the other vegetables here were home grown in a garden behind Kitchen A Trattoria. 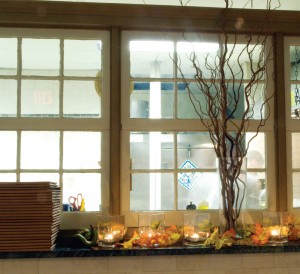 For dessert, skip the unexciting ricotta cheesecake and head for the mellow, delicious rhubarb and strawberry croustade and that moist, soaked extra virgin olive oil cake with sweet oranges.

Service too was sweet (and informed) but it would be better if the waitress, who takes the order, delivers it rather than that job being given to a second one, who doesn’t know where to put the plates.

Hybrids are hot, not just in the automotive realm where Toyota, Honda and Ford gas-electric cars are getting 30, 40 and 50 miles to the gallon, but in the restaurant world as well. While most restaurant hybrids are among the fast growing Asian contingent with their Asian Fusion, Pan Asian, modern Asian cuisine, Japanese-Chinese and Thai-Sushi spots, Manhasset’s Brasserie Coquille is in this category too. Located in a former hair salon, next to the upscale, 40-year-old La Coquille, it’s a lower priced alternative probably spawned by the current recession. 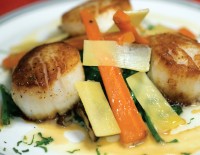 This neat little nook is a culinary and economic hybrid. While its menu lists a number of brasserie standbys like steak frites, pâté, goat cheese tarte and burgers, more than half the dishes here are Italian, Japanese, Latino and American. Don’t expect to find classics like skate, bouillabaisse, roasted chicken, fish soup or cassoulet.

Although no entrée or appetizer (they’re not designated separately on the menu) tops the $22 mark, diners who order wines or desserts will be paying La Coquille prices for them. (The lowest priced bottle of wine costs $30). Neither is on the more modest Brasserie menu.

Traditional brasseries are informal beer centered cafes and the tiny Brasserie Coquille, with its long bar, fireplace and cozy back room is indeed an informal café, yet it serves the same beer that’s offered in La Coquille. With fewer than ten brews, it’s not beer centered.

It’s natural when in a French eating place to order French dishes, therefore we began our meal with Gruyère gourges ($8), eight tasty toasted, melted cheese rounds (if you like grilled cheese sandwiches you’ll like this), the respectable goat cheese tarte ($10) sporting ripe summery cherry tomatoes, crisp, greaseless commendable French fries ($6) with a savory aioli dip and that Bistro burger fromage ($9) cut four ways as a slider-like starter. The burger itself was a juicy, nicely crusted treat that would’ve been even better with a customized–rather than a mass produced–commercial bakery roll and more interesting cheese. 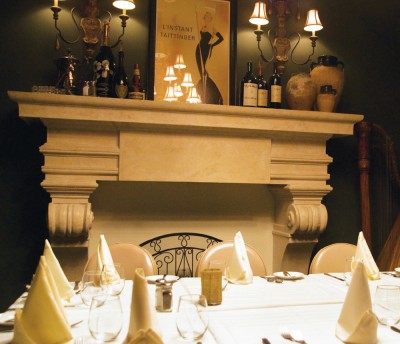 Entrées sampled included grilled wild King salmon ($19.69) from La Coquille’s 40th anniversary specials that was fresh, firm and fine and a beefsteak au poivre ($19.69) from that same menu. Unfortunately, the often-encountered chewy skirt steak, without even one of its promised peppercorns, did not have enough sauce (if any) to tell if it was the listed brandy concoction. A sprawling, generous portion of pork Milanese, Reggiano ($14) topped with Mesclun and dressed with mango vinaigrette, our only Italian choice, was gently breaded and nicely seasoned. Three seared scallops for $22 were our only overpriced pick. The scallops (what there was of them) were lightly cooked, brown topped beauties but their sautéed spinach accompaniment lacked seasoning.

Sweets sampled were a passable, but not memorable floating Island, a concentrated, intense chocolate mousse with a squiggle of welcome whipped cream, and an above average Napoleon enhanced by its crème fraîche sauce.