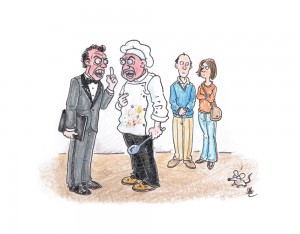 We human beings seem to carry the capacity for conflict and competition within us, and it manifests itself in a wide variety of situations. My client Hal, a 29-year-old maitre d’, was angry that the chef tried to change Hal’s seating arrangement. As Hal described it, his arrangement made sense and the restaurant owner had approved it. Hal felt the chef had no business interfering with what was clearly Hal’s area of authority. Hal and the chef had similar disagreements before. Hal considered his options, including confrontation, to make sure that he was taken seriously.

As I drive back and forth to NYC on the LIE, I am always amazed that some drivers—usually younger—cut people off, switching lanes when all the lanes are slow. They pop between lanes and often wind up behind the cars they aggressively passed. They just want to get to their destination faster than others. In a similar way, I am amazed at the intensity of disputes within many groups. One volunteer arts group, whose members shared values, had a major split over what movies should be shown. Our tennis and golf groups have had splits over call-in times for reservations or whether carts must be used on weekends. One major fight I had with my wife when we were first married was—and I’m not kidding—whether we should shop at Macy’s or Gimbel’s! Academia, where I spent much of my working life, is noted for its vituperation. For example, Humanities departments across the country became bitterly divided between the feminists and those who questioned them.

We human beings seem to carry the capacity for conflict and competition within us, and it manifests itself in a wide variety of situations.

become deadly. When President Bush Sr. went into Somalia in the UN Operation Restore Hope, it was to bring order and peace to a divided country where hundreds of thousands faced starvation. Even though the attempt was humanitarian, it was greeted with hostility. Our troops became targets and 42 Americans were killed trying to help the Somalis. Ethiopia and Eritrea have been at war where more were killed than lived in the village whose boundaries they fought over. My wife and I had the Cultural Ambassador of Macedonia over for dinner one night, and he said he was prepared to die if Greece claimed the name of Macedonia.

These disputes reveal something primitive and intense about our innate animal condition. Many of us strive for power and control, and if challenged, we respond disproportionately. The people who hold different views are no longer just people who differ, but demons.

The issue of dispute is not nearly as important as whether we win or not. The driver who gains a minimal advantage will feel better if he beats others and gets to NYC in 90 minutes rather than “losing” in 70 minutes. The issue with my wife was not whether Macy’s was better; it was who was in control. Although I believe some things are necessary to fight for, in many geopolitical conflicts, the issue of perceived assault has led to many dead martyrs and victims.

In discussing the seating issue with Hal, he realized that the differences between the chef’s plan and his were small and not really worth the conflict. He let it go. That was mature. Often, we need to ask if what we’re fighting over is worth it. He lightened up.