Film critic Peter Wollen once wrote that Ten-Best Lists are more of a reflection of a critic’s values than an objective list of the year’s best movies. I’m not sure what this list says about my values, but here in no particular order are my choices for the best films of 2009.

Lee Daniels’ powerful adaptation of the novel Push by Sapphire is an arrow straight at your heart. Without a false or sentimental note, Daniels tells the truly heartwarming story of a young African-American woman who uses the power of education to pull herself out of her own private hell.

A couple torn apart by the tragic death of their son start literally tearing each other apart in Lars von Trier’s disturbing art horror film. Fantastic performances by Charlotte Gainsbourg and Willem Defoe keep von Trier’s mad masterpiece from tipping over into absurdity.

Set in the 1960s Minnesota of their childhood, this hilarious yet devastating tale of the Job-like suffering brought upon the head of a Jewish professor is the Coen Brothers’ most personal work.

Steve McQueen’s stunning drama about Bobby Sands and Irish hunger strikers is without a doubt the most scorching cinematic experience of the year. Noted visual artist McQueen’s film is an absolutely beautiful vision of an almost unbearably painful story. 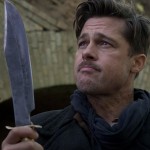 Quentin Tarantino’s alternate version of World War II about a band of Jewish-American soldiers and a French Jewish woman fighting the Nazis is both the ultimate Jewish revenge fantasy and a deliriously entertaining celebration of the power of movies.

Henry Selick’s lovely stop-motion animation perfectly captures the dark magic of author Roald Dahl in this bewitching tale of a dissatisfied young girl who discovers a door to a seemingly perfect world.

The Imaginarium of Dr. Parnassus

Terry Gilliam is back at the top of his game in this ambitious fantasy about a magical showman trying to win a bet with the Devil. Excellent performances by Christopher Plummer, Tom Waits and Heath Ledger (in his final performance) highlight this madly colorful tale.

When Horse, Cowboy and Indian attempt to build a barbecue, they inadvertently propel themselves on a non-stop adventure that features mischievous scientists, mean sea monsters, music lessons and a snowball-throwing robot penguin. No film in recent memory packs more energy and imagination into every second on-screen as this animated adventure comedy from Belgium.

Michael Haneke’s work (Cache, The Piano Teacher, Funny Games) is always uncompromising in its cold, harsh vision of humanity and his latest is no exception. When authorities in a small village in pre-war Austria try to investigate a series of inexplicable crimes, they uncover a corrupt heart of darkness that is too shocking for them to contemplate.

Neill Blomkamp’s thrilling saga of aliens from another planet who land on Earth and get treated like illegal immigrants was a fantastic reminder that science fiction films can still be intelligent, thought-provoking AND edge-of-your-seat exciting.