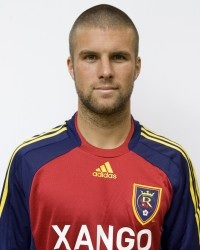 “There was a lot of media hype behind the game,” said Wingert, whose team played David Beckham and the Los Angeles Galaxy and won after a nail-biting penalty kick shootout (1-1 (5-4 PK)). “With LA in the final, we knew that would boost the press a little bit. It worked out fine for us. We were just going to stick to our guns, playing the underdog role as we went through the playoffs the whole time.”

Wingert, who graduated from St. John’s University and won the Hermann Trophy in 2003, college soccer’s equivalent of the Heisman, is a defender and has jumped around a bit in the MLS since his rookie season in 2004.

He was selected by Columbus 12th overall in the 2004 MLS draft, then acquired by Colorado in 2006 in exchange for a draft pick, before finally ending up in Salt Lake in 2007.

Wingert, 26, has risen as one of the top and most reliable defenders in the league.