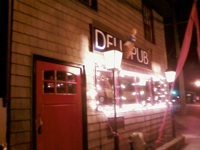 Brickhouse Brewery and Bobbique are always rattled off when Patchogue’s beer scene is mentioned, but another bar along Main St. should also be given its proper due, one that exudes individuality when most are cold, unwelcoming, cookie cutter establishments.

Can you guess which bar?

Yes! Fadeley’s Pub is correct. Congratulations! You read the title. Thanks for…reading.

Fadeley’s Pub, which was once also a deli (food is no longer served here, though what could have been the meat display refrigerator still resides next to the bar), has been near the top of my “bars to visit on Long Island” list for quite some time, so I was excited when I convinced the girlfriend to stop there for a drink last Sunday (see: promises of paid beers and a cool mural of her favorite band, The Grateful Dead).

The exterior looks more like someone’s grandmother’s house than a pub, with its simple stand-alone frame, a residential door and a few smalls windows with neon brewery signs, but the inside is really “where it’s at yo,” and it felt like I had been transported to some college bar in upstate New York—only without the obnoxious students downing Jäger bombs and playing beer pong.

Vintage beer mugs, cans, bottles, Christmas lights, animal horns and random Grateful Dead memorabilia lined the all-wood interior, and surrounded a stage for live music and some booths. It had a cozy ski lodge in Vermont circa 1982 vibe to it, and I wanted to toss down a sleeping bag and chill for the rest of the weekend. Unfortunately, my girlfriend didn’t seem too keen on the suggestion, so we ordered beers instead.

After eyeing the Hacker-Pschorr Oktoberfest on draft (the 12 taps were mostly German), we chose bottled Affligem Blondes, plopped in a booth and had a nice time soaking up the thrifty atmosphere surrounding. Yep. A couple of human sponges, you could call us.

Disclaimer: If you happen to be disappointed with your visit to Fadeley’s, then you smell. Real bad. That is all.