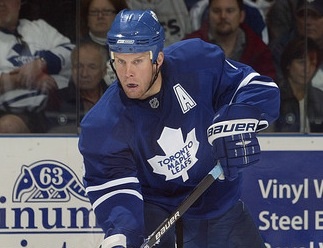 Just two days before Christmas, Mike Komisarek was back on his native Long Island.

The Toronto Maple Leafs’ defender played the Islanders at Nassau Veteran’s Memorial Coliseum, Wednesday, December 23, in front of friends and family. It’s always special for him to come home.

Komisarek was a first round draft pick by the Montreal Canadiens in 2001 and played with Smithtown native Chris Higgins (who is now with the Rangers) for most of his career. This past off-season, Komisarek signed a five-year deal with Canada’s other top team.

Though things have been rough for the Leafs this year, especially with an 0-7-1 start to the season, everyone north of the border is hoping they turn it around. They lost, 3-1, to the Islanders.

December looked to be a promising month for Toronto, who won seven games in the first 14 days, but they’ve taken a dive and have lost four of their last five contests (as of December 24).

The entire league is battling a tough schedule because of the Olympic break this year.

“You can’t sit there and complain about the travel and the schedule,” Komisarek said. “Everyone else is doing it. The team that adjusts to the schedule and the number of games in consecutive nights, the team that deals with it the best is going to have the most success.”

After the Leaf’s morning skate on Wednesday at the Coliseum, another reporter asked Komisarek what his favorite Christmas gift was as a kid.

“I was always a big fan of some kind of hockey equipment, skates or something like that,” he said.

Then, for a moment you saw the gleam of a child’s past in his eyes.

“You wake up and always remember the days whenever it got cold enough down here, around the holidays, with time off from school, you throw on the skates and go down to the pond and play until your feet were numb and your fingers were frozen.”

That’s hockey at its best.