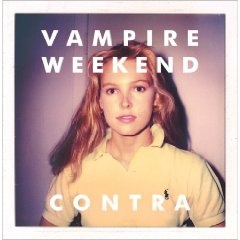 After Vampire Weekend’s 2008 eponymous debut met with such acclaim in the US and the UK, the hyper-literate Columbia grads felt some pressure when creating their follow-up LP. The Brooklynites’ first disc had an upbeat British New Wave meets Afro-pop sound, with tracks like the Anglo-African “Cape Cod Kwassa Kwassa.” And on their latest CD, Contra, the quartet explore some darker subject-matter (the film Repo Man was an influence) while adding breezy elements like reggaeton, ska, and calypso to their signature West African guitar sound.

While Contra was recorded in NY, the band says it really has a California vibe, and that they were inspired on a trip to Mexico. Lyrics to the leadoff track “Horchata” are evidence of Mexico as muse: “In December drinking horchata/I’d look psychotic in a balaclava.” It’s the perfect song for a cold day in New York, or anywhere. Contra drops on January 12th.