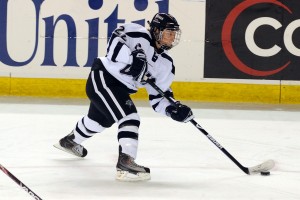 Brittany Skudder likes to win at Fenway, but that sentiment was normally meant for when her hometown New York Yankees beat the Boston Red Sox. That was, until her University of New Hampshire women’s hockey team beat Northeastern University, 5-3, in the first outdoor NCAA women’s hockey game, part of the Sun Life Frozen Fenway doubleheader played January 8 at Fenway Park in Boston. Boston College and Boston University played the same day, a week after the Boston Bruins and Philadelphia Flyers played one another in the NHL Winter Classic on New Year’s Day. Long Island was represented well at the event. Skudder, a Plainview native, was joined by Northeastern’s Siena Falino, who attended the Portledge School and hails from Centerport. “It was awesome,” said Skudder. “On the bench you looked up and saw the big Fenway Park sign.” Both schools practiced a day before the game to let the girl’s soak in the atmosphere. By game time, the snow was crisp; the heated seats made the girls warm and set the tone for a surreal experience. New Hampshire waited until the third period to cause its own flurry of scoring when it netted four goals for a come from behind win. “We weren’t going to be the first team to lose a [women’s] outdoor game,” Skudder said. 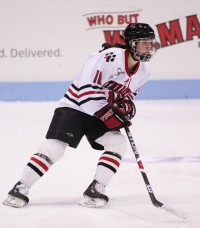 Winning aside, both teams were thrust into the spotlight like never before.“We felt like celebrities,” Skudder said. “ Everything we did was on camera.” Both girls were used to the temperature and outdoor feel. Skudder played at the North American Hockey Academy in Vermont, which has an open roof on its rink. At Portledge, Falino skated outside at Beaver Dam Winter Club. Like them, most of their teammates had skated in outdoor conditions before, but the constant snow slowed the speed of the game down considerably. “It snowed well into the night,” Falino said. “It slowed down skating and moving the puck.” “It wasn’t moving as fast as we wanted it to,” said Skudder, who wore eye black to help with the sun’s glare, which at times reflected off the ice.

It was a glorious day of hockey and the girls from Long Island are left with a thrilling story to tell for the rest of their lives. “It was the biggest stage any of us have ever been on,” Falino said. “All of New England would have loved to be in our position.

Playing there, the whole experience and being treated like pro hockey players was awesome.” For a moment, Pesky’s pole, the Green Monster and Yawkey Way were a cool second to the women of the ice at Fenway that day.