It may be February—which means we’re technically in the dead of winter—but if you’re a skier or snowboarder on Long Island, then it’s time to face a cold (or is it warm?) hard truth: Spring isn’t all that far off. With it comes warming temperatures and rain, and that means bad things for snow conditions at the closest resorts in Pennsylvania’s Poconos, New Jersey’s Highlands, New York’s Catskills and Massachusetts’ Berkshires.

But ski season is far from over. There are months of skiing and riding still to be had, if you know where to go. It’s a simple game of chasing winter. And winning the game comes down to following two basic rules: Go north and go high (or both). Do those two things and you’ll find a deep, plentiful snowpack that’ll keep you happily sliding downhill on snow rather than slush. In fact, if you play your cards right, you can enjoy lift-served skiing until a month or so before the South Shore beaches officially open for the summer season on Memorial Day Weekend. Crazy, but true.

Here’s where to go to make it happen. Consider it your personal guide to the high North Country. 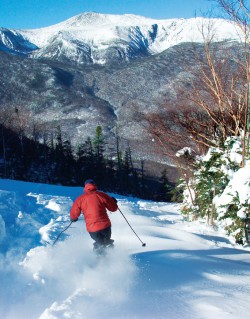 NEW YORK
Right here in the Empire State, bypass the Catskills (and everything else, for that matter) and make a beeline directly for the Adirondacks and Whiteface Mountain (whiteface.com). At 4,867 feet tall, it’s the fifth highest peak in New York State. With more than 3,100 feet of lift-served vertical (increase that number to 3,430 feet if you’re willing to hike a little), Whiteface dominates skiing east of the Mississippi. It also beats out Mammoth Mountain in California, and rivals places such as Vail in Colorado, for top-to-bottom vertical.

This season features expanded terrain at Lookout Mountain, Whiteface’s newest addition and third peak, which opened in January 2009. It hosts intermediate and expert groomers, as well as the brand-spanking-new Sugar Valley Glades. No matter where you ski on the mountain, you’ll have unsurpassed views of the wilderness of the Adirondack Park. 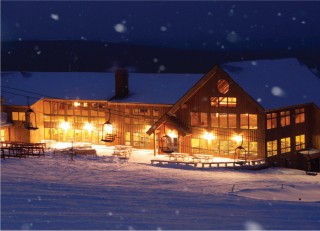 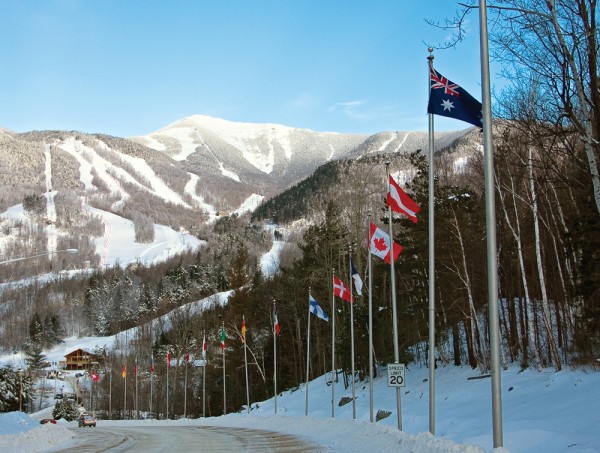 VERMONT
In the Green Mountain State, forget about the seemingly endless (and some say, icy) string of ski areas in the southern and central parts of the state. Instead, head to the undisputed king of steep-and-deep powder skiing in New England: Jay Peak (jaypeakresort.com). Located in Jay State Forest in Vermont’s Northeast Kingdom, it gets consistently cold temps and a weather pattern that repeatedly drops the fluffy white stuff on the mountain. As a result, Jay is often one of the last ski areas in the East to close up shop at the end of the season.

Alternatively, make your way to Stowe Mountain Resort (stowe.com). Perched on the slopes of 4,395-foot Mount Mansfield, Vermont’s tallest peak, Stowe is also home to one of the longest ski seasons around, just one reason the skiing heritage here runs deep. In fact, at Stowe you’ll find the Mount Mansfield Ski Patrol, the first organized ski patrol in the country and the group that inspired the present-day National Ski Patrol system.

Sleep and eat in: Jay or Stowe
Fly there via: Burlington
International Airport
Driving mileage/time from NYC: 373 miles / 7 hours to Jay; 334 miles / 6 hours to Stowe

NEW HAMPSHIRE
New Hampshire may be the Granite State, but it sure doesn’t lack for snow. Just ask Bode Miller, whose skiing career was birthed at Cannon Mountain (cannonmt.com). The ski area stands tall above Franconia Notch, directly across from Mount Lafayette and the Franconia Ridge…a stunning alpine backdrop while you’re skiing Cannon’s steeps. This season, Cannon expanded into the once-abandoned and adjacent Mittersill ski area, adding 86 acres of ungroomed, natural-snow skiing. It’s just one more reason (aside from the rock bottom lift ticket prices) that Cannon is often considered the best “value” mountain in the East.

Perhaps the only ski area in New Hampshire to rival Cannon is Wildcat Mountain (skiwildcat.com), in White Mountain National Forest. Set directly across the valley from Mount Washington and Tuckerman Ravine, the views are unsurpassed. (In fact, SKI readers rated Wildcat number one in the East for scenery, while Cannon took second.) Plus, here you get the simultaneously quaint and bustling village of North Conway to use as your base camp.

Sleep and eat in: Lincoln for Cannon; North Conway
for Wildcat
Fly there via: Manchester (NH), Portland (ME) or Boston
Driving mileage/time from NYC: 330 miles / 6 hours to Lincoln; 350 miles / 6.5-7 hours to North Conway

MAINE
Maine’s ski areas typically stretch their seasons until the very end of April, longer than most others throughout New England and the Northeast. At the top of the pecking order, literally, is Sugarloaf (sugarloaf.com). At 4,237 feet above sea level, it’s the second-highest peak in Maine and the only mountain in the East with above-treeline lift-served skiing. From the pinnacle of the mountain, drop into the summit snowfields for a taste of that tree-less skiing. Or pick your way down any one of nearly 140 developed ski trails spread across an expansive 1,400 skiable acres.

Also located in Maine’s Longfellow Mountains is Saddleback (saddlebackmaine.com). Only 120 feet shorter than Sugarloaf, Saddleback is considered by many to be the crown jewel of the Rangeley Region of western Maine. Like Sugarloaf, Saddleback also boasts summit snowfields (though you’ll have to hike a short distance above the lift to access them).

QUEBEC
For Long Islanders headed north of the border, the choice is obvious: Mont Tremblant (tremblant.ca). Located on the edge of a provincial park of the same name in the rolling Laurentian Mountains of southern Quebec, Tremblant is a perennial favorite among skiers. In fact, SKI magazine’s annual reader poll (published in October 2009) proclaimed Tremblant the best in the East (again…as in, for the 13th consecutive year). The resort also took top honors in seven sub-categories: Service, après-ski, on-mountain food, lodging, lifts, dining and overall satisfaction. 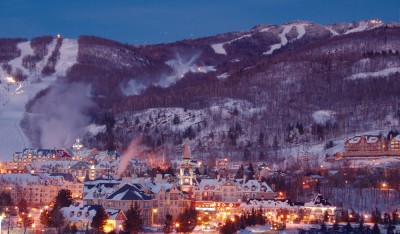 It’s hard to resist the exotic appeal of French-speaking Canada, coupled with Tremblant’s charming (if faux) European-style pedestrian base village. Of course, the skiing’s not too shabby, either. With a north and south side to the mountain, you can stay in the sun if it’s cold or ski in the shade if it’s warm. Off the slopes, check out the new Casino de Mont-Tremblant (call it “Mohegan Sun meets the mountains”).

If Tremblant proves a little too cliché for you, try Le Massif de Charlevoix (lemassif.com) instead. Standing above the St. Lawrence Seaway northeast of Quebec City, Le Massif is Mont Tremblant with more snow, more vertical (the greatest in Canada east of the Canadian Rockies) and fewer crowds. It’s where the locals from Quebec go when they feel like Tremblant is getting overrun with too many New Yorkers and other Americans. With an annual average snowfall of 21 feet (compared to Tremblant’s 15 feet), you can’t go wrong here.

Sleep and stay in: On-mountain or Saint-Jovite for Tremblant; Quebec City for Le Massif
Fly there via: Montreal for Tremblant; Quebec City for Le Massif; (also for Tremblant, Continental is offering flights from Newark direct to Mont Tremblant International Airport through the end of March)
Driving mileage/time from NYC: 450 miles / 8.5 hours to Tremblant; 520 miles / 9.5 hours to Quebec City The whole point of going north and going high is, of course, to find cold temps and good snow. But let’s be honest… by the very end of the season, you’re going to be skiing soft, slushy snow (and maybe through the odd puddle or two) whether you’re ripping it in Vermont or New Jersey or Colorado. That’s when it’s time to take part in an annual tradition at many ski areas: the pond skimming contest.

A resort’s snow crew digs a man-made crater in the snow at the base of a ski run, lines it with a tarp, and fills the hole with water to create a pond. Then contestants (preferably wearing outlandish costumes) take turns zooming down the run and (hopefully) skimming safely across the pond. Those that don’t make it across or crash in the process get a little wet. But that’s part of the fun.

Wanna try your hand at pond skimming? Saddleback’s event is on April 3; Gore (Whiteface’s little sister) and Le Massif are both on April 10; and Jay is on April 17.