Although I disapprove of the publicity-seeking couple crashing the White House dinner, I could not help smiling at their chutzpah. I immediately thought of a patient, Shirley, a grandmother, who felt she had personal ties with a famous billionaire. Shirley recently found out that the billionaire was addressing a charity function and, without a ticket, went. Unlike the couple, she explained her situation openly and the receptionist not only admitted her, but also gave her a prime seat. Afterwards, she stood in line and met the billionaire, explained that they may be related and asked for his help to clarify her situation. He seemed genuinely interested, gave Shirley his card and asked her to call. She will. 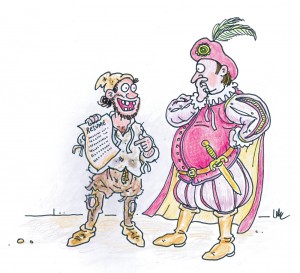 I’m proud of Shirley. Too many people conjure up reason after reason for why they can’t do something. I still feel guilty over something that I didn’t do. Some 30 years ago while on a tour of the USSR, we were asked to look up Benjamin Levich, a famous member of the Soviet Academy of Sciences, who became a non-person after applying to immigrate. We hit it off. His wife, like mine, was a Shakespeare scholar. When we discussed American politics, it seemed all American politicians who visited the USSR visited him. I mentioned Bobby Kennedy, and they’d had him over for lunch and thought highly of him. We snuck out of our official tour when they invited us to lunch again and had a wonderful time. Indeed, Harrison Salisbury, the NY Times foreign correspondent, once wrote that dinner at the Levich’s was the most memorable of his life. A few years later, we found out that Levich had finally immigrated to America, settling in New York City.

I wanted to take them out for dinner, but Marilyn, my wife, said, “They’re too important and busy for us.” I agreed and we never contacted them. Years later, I met the Russian mathematician who arranged our contact and asked how the Levich’s were doing. Benjamin had died and his wife was now ill. He said they were very disappointed in Americans. The people who visited them in Moscow now ignored them, probably feeling as we did, and they felt isolated. We would have loved to get together with them, but we lacked chutzpah. I still feel guilty.

What’s the worst that could have happened if we called? They would have given excuses to avoid us. Big deal! On the other hand, we could have expressed our appreciation for their hospitality and possibly developed a meaningful friendship. Both my wife and I thought the whole family was wonderful, warm, bright, generous and interesting. They may have not been willing to see us, but it would have been a treat for us if we got together.

Despite admonitions to school children that they can be anything they want to be, there are limits to what we can do. Yet, the most tragic limit is that which we self-impose. Often, I’ll suggest things for patients to do and they’ll resist, being afraid of failure.

Instead of finding reasons why we can’t do something, we should be asking how we can get it done. Often, that takes chutzpah. Usually, the biggest failure is the premeditated failure of not trying. So many people have the vision but lack the chutzpah to achieve their dreams. People with chutzpah, like Shirley, simply have more fun.