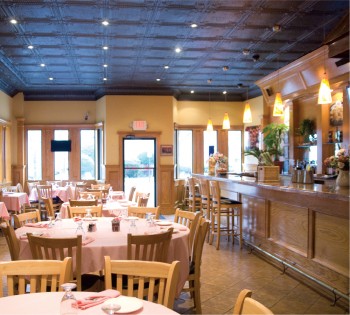 Mineola Boulevard is lined with ethnic, mostly Portuguese, restaurants. Last June, Lemon Leaf, a Thai restaurant, tried to shoehorn its way into this multinational array of eating places. Judging from my two visits and the sparse number of diners at the tables in this newish Asian spot, Lemon Leaf is still trying to catch on.

It’s a restaurant that deserves better. Despite comic opera service, its food is consistently tasty, its portions are bountiful and its prices are eminently affordable. It’s also a restaurant with a successful pedigree. A number of other Lemon Leaf restaurants on Long Island with the same or similar menus are prospering. Nor should diners who are spice adverse fear the blowtorch dishes often associated with Thai cuisine. Quite the opposite.

We succeeded with the Tom Yam Goong, or spicy shrimp soup, packed with plump shrimp, lemon grass, mushrooms, pepper, lime juice and plenty of lively kick. On a scale of ten for most spicy and one for least, our table’s vote came in between seven and ten. The heat quotient batted .500 on two salads. The papaya ordered with medium spice was a light, airy delight, but there was not a hint of snap, crackle or pop. (I realize this might be good news for many, perhaps most, diners). The calamari salad had just enough snap to make it interesting and to contrast with the more often encountered Italian version of calamari. Both of these salads, priced at $7.25 were enough appetizers for six diners.

Other noteworthy starters were the shrimp noodle or gigantic deep fried shrimp wrapped in crisp noodles that generated both taste and texture contrast, and the mini spring rolls (eight for $5.50) that were thin, crisp, greaseless treats. Indian golden bread, a flaky pastry roll with interesting nut-dominated filler, was sometimes crisp and sometimes doughy. Pad Thai, a signature dish of Thailand, was a tad too sweet for my taste. Three other pasta dishes surpassed it: An onion-dominated drunken noodle, which is a wide, stir fried noodle laced with chicken or beef; Phad Wooson, a pan-fried clear noodle mixed with shrimp, shitake mushroom, tomatoes and vegetables; and a chicken/fresh noodle preparation that offers vegetables, lime leaf and a little kick. 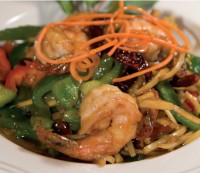 Shrimp entrée dishes are a good way to go. The Goong Phao, or grilled jumbo shrimp in the shell, are the size of tiny steaks. (They are the menu’s most expensive entrée at $19.50.) Garlic shrimp run a close second. Meat eaters should check out the lemon grass pork chop, thin sliced, marinated in lemon grass, with garlic, lime juice and galanga (a ginger-like root). It boasts a medley of flavors and is bony but good. One of the best and least expensive entrées ($9) is the stir-fried eggplant in a tangy chili sauce studded with lime leaves.

One hard working, well meaning but amateurish waitress is hard pressed, often overwhelmed taking care of bar patrons, telephone inquiries, take out orders and diners. Wine service is a complete calamity, dishes are rarely if ever cleared and occasionally an entrée delivered to the table is not the one that was ordered.

Yet, this little Asian enclave, with its pink napery, bathed in soft light, serving consistently good food deserves more attention than it’s getting. 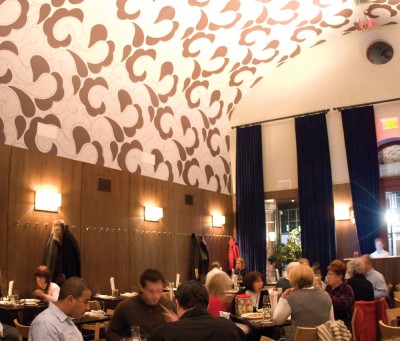 With apologies to Paul Revere—the Bohlsen’s are coming, the Bohlsen’s are coming. In fact, they’re already here. Michael and Kurt Bohlsen converted a 1922 red brick, two-story former bank building next to their Tellers Chophouse into Verace, a slick, stylish, sophisticated restaurant dedicated to serving authentic Italian (not Italian-American) food and wine.

Verace is the logical next step in the culinary ascent of the Bohlsen family who already own prestigious, top-of-the-line restaurants like Prime in Huntington and Tellers in Islip, and casual, comfortable, moderately priced eating places like the Beachtree Café and Smithtown’s H2O Seafood Grill. It figured the Bohlson’s would not long neglect Italian food, still the Island’s favorite. They plan to cover all the bases later this year by opening an expansive, yet to be named, Asian restaurant (like Manhattan’s Buddakan) in Babylon.

Diners enter Verace (which means truthful, as in authentic) through a patio-like Italian garden to the entrance. They then pass by a bright red, open kitchen, a wood stone pizza oven with a viewing window, a 100-year-old Berkel meat slicer and stainless steel lined Eco Wine Kegs behind the bar. The main room, with its secondary balcony dining area, has lines that are both modern and rustic. Its brick walls, barrel vaulted Cathedral-style ceiling with a giant Paisley fabric, tall windows, reclaimed angled oaked floors and soaring 20-foot long blue velvet drapes all contribute to a dramatic layout that enhances the food.

That food is prepared by Francesco Torre from Tuscany by way of California. Diners at Verace eat like Italians not Americans. They consume little bites, antipastos, pastas, entrées and desserts rather than traveling the standard appetizer, entrée, dessert route. All of Mr. Torre’s Italian Grandma cooking is accomplished in house and served on tabletops of Caesar stone granite. Nothing is dandified or pretentious, down-to-earth is the rule here.

Those little bites, or Sfizi, are perfect accompanying before dinner drinks. Try the savory Sicilian olives. The tasty, simple, thin-crusted pizzas are among the best antipastos (though not noticeably different than those at more typical Italian restaurants). Another positive possibility is the plump, pristine steamed mussels in white wine with nice, crispy bread. The baby Romaine hearts with Caesar dressing are respectable though not outstanding or unusual.

The fragrant, earthy, sublimely rustic pastas are, as they should be, Verace’s strong suit. They are faithfully Italian, the real stuff. Target the hearty, hefty, spaghetti with veal meatballs, a peasanty triumph; the rich, ultra creamy gnocchi with Teleggio cheese Fonduta that break apart in your mouth with feathery delicacy; the moist grilled shrimp risotto accompanied by a jumbo shrimp; and the refined, subtle crab ravioli stuffed with enough discernable spinach to make them interesting.
The secondi or entrée super star is the light, fresh, flaky grilled branzino filet with olive oil, sea salt and spinach. The seafood stew containing briny fresh-from-the-sea ingredients (shrimp, octopus, clams, mussels) is much like an Italian bouillabaisse (and like that French creation, the bang is in the broth). Two other excellent main events, the tender, prime, fall-from-the-bone braised veal Osso Bucco on a pool of creamy white polenta and Grandma’s chicken Parmigiana that’s lighter than standard versions, aren’t particularly unusual but are enthusiastically recommended.

Finish up with a lighter-than-air cannoli or better yet, an interesting non-traditional tiramisu in which the usually soft Lady Fingers are rolled flat and pan fried. And don’t neglect the ambitious array of wines at Verace. In addition to over 100 by the bottle choices from Italy, Australia, South American and the USA, there are custom-blended wines on tap in those Eco Kegs behind the bar.

Verace offers good food, fair prices and nice waiters. Its ingredients are fresh and distinct, its portions are appropriate and its presentations are clear.