John Caglione, Jr.—an Oscar-award winning make-up artist based in Mt. Sinai—credits luck, a childhood idol and divine intervention for his success. But after hearing his story, it becomes undeniably clear that John’s rise was self-propelled, fueled by talent and a tenacious passion for his craft. 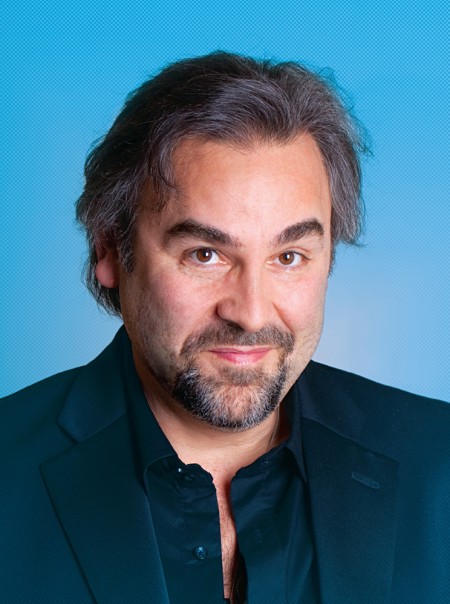 LIPulse: How did this all come about? Did you always know you wanted to be a make-up artist? John Caglione: Yeah, pretty early on. I started watching horror movies when I was a kid, and was freaked out and shocked by the old Universal horror films, like the original Frankenstein and The Mummy. And I remember asking my parents… if they got these people from an island of freaks… And my mom was like, ‘No, that’s [done by] a make-up artist…These are actors.’ And from that moment I was like, ‘Wow, it’s a trade—you can actually do this!’ Right then and there I started getting magazines—everything I could get my hands on—to learn how to do it. // LIPulse: So did you go to school for this? JC: I’m pretty much self-taught…but my main breakthrough happened when…I was about 14 and The Exorcist had just come out. And Dick Smith did all the make-ups in The Exorcist—the demonic make-up and all that stuff—and that just blew me away, so I wrote him a fan letter. And he actually invited me to his basement workshop! I went and met [him], and I was raving about this demonic make-up and the head spinning around, and he said, ‘What do you think of the old Father Merrin?’ And I said, ‘Yeah, he’s a cool old guy.’ And Dick said, ‘Well let me show you how I did that’…and he pulled out a plaster cast of Max von Sydow, who was only 46 [sic] at the time. And he started pulling out these foam rubber jowls and neckpieces. I didn’t realize that the old Father Merrin was a whole foam-rubber face. Did you know that? // LIPulse: No, I didn’t! JC: Yeah, so, that blew my mind and set me in the direction of wanting to figure out how to do it, because it seemed really miraculous. So Dick Smith was a big influence in getting me started and I owe my career to him. // LIPulse: Did Dick take you under his wing? Did he work with you very closely over an extended period of time? JC: No, he didn’t. [When] I met him, I was doing these really crude make-ups and I worked up the courage to show him pictures of it, and he told me that they were terrible and that I’d never be a make-up artist. I was crushed. And he said, ‘Maybe you should work in a dental lab, because you get to work with your hands and you get to make molds.’ And so in high school I landed a job in a dental lab.

// LIPulse: So you actually took his advice? Were you thinking you should give up on make-up? JC: Well I did for a little while, but I asked him if I could keep in touch. And he said sure. I think I impressed him by landing a job in a dental lab…And he looked at [my work] and saw improvement in the pictures I showed him. So…when I was graduating high school, he recommended me to NBC. They had an apprenticeship program back in those days… So in 1976 I started training there and I was on staff there for about six years. I did all the original Saturday Night Lives…I put the cone heads on the Coneheads and put the soul patches on the Blues Brothers. I was kind of their prosthetics guy. I was doing crazy stuff on the show. // LIPulse: Were you laughing the whole time you worked there? JC: Yeah, it was great! I was very nervous, ‘cause I was only eighteen. I was awestruck and just trying to keep my job and keep my head above water. I really didn’t know anything about the inner workings of a network show, so I had to hit the ground running. I was most nervous about getting the work done on time and it looking decent. // LIPulse: Have you had any favorite projects, of all the work you’ve done? JC: Yeah, I guess Dick Tracy. That was a lot of fun. // LIPulse: So when you won both the BAFTA and the Oscar for that, did it feel like the icing on the cake? JC: Yeah, we worked really hard, so it was nothing short of a miracle, really. Just to get the job was a miracle, because that was a Hollywood-based film and I was from New York. // LIPulse: When you were growing up, watching horror films and dreaming of this work, was it your goal to work with Hollywood? JC: I didn’t know where I would wind up, but I knew I wanted to be a make-up artist…You know, I played sports in high school, but I had pictures of Jack Pierce making up Boris Karloff on my wall. I was kind of a weird kid in that way, but those were my idols—Jack Pierce and Lon Chaney, the guy who did The Hunchback of Notre Dame…So yeah, I used to try to visualize myself in their shoes, wherever that might lead. // LIPulse: Any dream gigs in mind for the future? JC: Yeah, I’d love to do a nice old-age make-up sometime. I’m drooling for something like that…like in The Exorcist, Father Merrin. That would be a cool project. // LIPulse: But you’ve already done old age make-ups for several films. JC: I have done it before, but you know I think that I’m a little older now and more prepared for it at this point. Listen, you never know what’s around the corner and that’s why I’m still in it—that’s the exciting part. // LIPulse: So you like this lifestyle of being on, then off and never knowing what’s coming next? JC: Yeah, it’s been 33 years now for me and I guess I’m just kind of programmed that way. I like to work and be really busy while I’m working, and then I like my downtime, when I can hang out with my family and just relax. So I’ve been real lucky, real lucky. // LIPulse: How has your family reacted to this career choice over the years? Are they supportive? JC: Oh yeah, I’ve got a great family around me. I am blessed to have my wife Helen, and my daughters Lauren and Nicole. They have moved back and forth from coast to coast for my career, and have sacrificed a lot…My wife is very strong and resilient and that’s the whole thing right there. // LIPulse: How about growing up? How did your parents feel about your career ambitions? JC: Very supportive…They were behind me. This was like the early ‘70s, and my parents were going out and buying nose putty for me, and grease paint, and I’m sure they were scratching their heads in private. But they were always right there and supporting what I was into. I’m very lucky. // LIPulse: It does sound like it. But it also sounds like you always had the preparation to make the most of opportunities, and the discipline to see them through. So I don’t think it’s all just luck, I’ll say that. JC: No, I also—not to get too holy-roller on you—but I believe there might be some divine intervention in this whole thing, too. I don’t know, but looking back over my career, it just seems that things fell into place for me.