Paintings by María Schön feel like reflective moments spent in a tropical paradise with breathtaking views. The curved furrowed seas of deep blue conjure memories of gazing upon a perfect ocean. The lush greens equally compel and conjure images of lush forests. Then there are the quirky plant-like sprouts that resemble a mixture of bananas, coconut tree leaves or an exotic plant. Fertile mountains curve into the seascape to become part of the visual presentation. 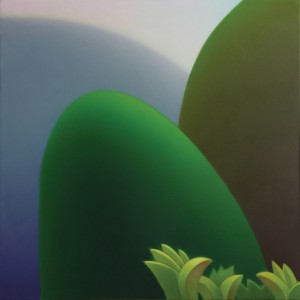 The landscape elements channel the conscious. To stop there doesn’t do the artwork or the artist justice. While the welcoming landscapes strike the viewers and draw them closer, it’s the primal memory and subconscious that can truly captivate.

The suggestion of a solitary sun-kissed paradise is no accident. Ms. Schön spent part of her childhood visiting family in their native Venezuela. Her seascapes channel imaginary musings and memories on family vacations spent in a secluded paradise in Venezuela.

Since 2001, Ms. Schön’s artwork has been devoted to the series “Landscape and Memories”. The series purposefully places viewers in an imaginary landscape where the mind can wander. Even before the series, Ms. Schön has spent years painting recognizable shapes to help channel a psychological dynamic and create a subtle narrative in each piece. Her use of “characters” to tell stories in the current series finds their origins in her training as a filmmaker.

“I could only go so far with my painting so I decided to go to film school,” Ms. Schön said. “It was there I learned how to tell stories. I had to find a direction on what I wanted to say as an artist and how to say it.”

Ms. Schön spent a year studying art at Cooper Union and graduated from Maryland Institute College of Art with a BFA in 1978. In 1984, she graduated with a MFA in film studies from New York University’s Graduate School of Film and Television. She currently lives in East Hampton.

After NYU, Ms. Schön believed film would be her creative calling. Life intervened, and marriage and a new daughter pushed her in another direction. Instead of continuing to make stories with a film crew, she picked up her brushes and colored pencils and connected her past with her future.

The primal dance between male and female is an important part of her art. Whether acknowledged or not, sensuality and sexuality are dominant parts of the human experience, she said. Like life, the compositions contain multiple meanings and layers for viewers to explore. 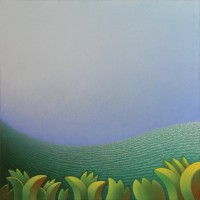 “Landscape and Memories” contains four compositional elements. Shapes representing ocean, sky, mountain and tree are used to create paintings that connect to each other but stand alone as individual works. Typically, Ms. Schön makes mini-series of three paintings that can be hung as a triptych but don’t have to be.

The current series is personal because it’s autobiographical, Ms. Schön said. The solitary feeling each painting contains comes from her experience of straddling two cultures without fully belonging to either.

Ms. Schön is represented by Solar Contemporary Art & Design in East Hampton. Her work is also held by Spanierman Gallery LLC in Manhattan. Her work has been exhibited in galleries and museums on the East End of Long Island, the Islip Art Museum, and in Venezuela, California, Rhode Island, Maryland and other states. See mariaschon.com.