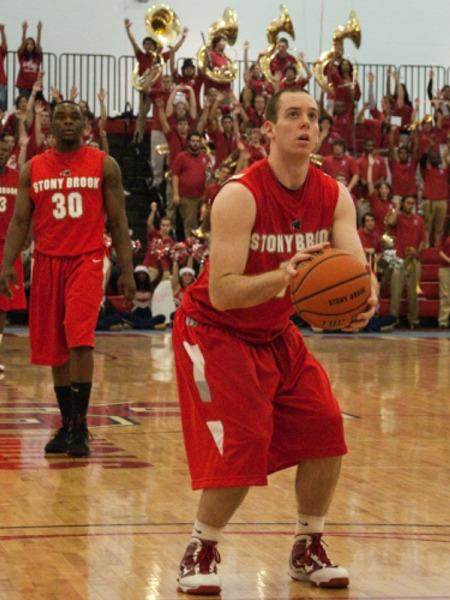 The best Division I men’s basketball program in the Metropolitan area? St. John’s used to own that title – easily. In the era of Lou Carnesecca and even Mike Jarvis, everyone else – from Hofstra to Manhattan – played in the shadows.

And then there was Stony Brook. The Seawolves weren’t even an afterthought. They played in total darkness. An exaggeration, yes. But not far from the truth.

Now here’s another truth: Stony Brook may have the surest path to the NCAA Tournament of any team in the area. The Seawolves improved to 14-7 after a 67-61 win over America East rival Albany on Sunday, Jan. 24, their best start since the 1991 season.

Stony Brook’s growing pains are easy to understand. The Seawolves made the quantum leap from Division III to D-I status in 1999. Steve Pikiell earned America East coach of the year honors a year ago after guiding Stony Brook to a 16-14 season, its best yet.

It’s a far cry from where the Seawolves once languished.

Now in his fifth season, Pikiell and the Seawolves are on pace for a breakthrough run. Not only are his players winning on the court, but the program has recorded its highest GPA ever. And 19 of 20 players have graduated during Pikiell’s tenure.

“It’s been quite a journey,’’ Pikiell said.

Aside from Iona (15-6), no D-I program in the area has more momentum heading into February. Certainly none is more underrated.

Forget for a moment that Stony Brook has actually played – and lost – to St. John’s and Fordham this season. The Seawolves are making it count where it matters most – conference play. Stony Brook already beat first-place Vermont on the road last week and is 8-1 at home.

Stony Brook leads the conference in scoring margin (4.9), is tied for the lead in steals (7.7) and second in turnover margin (2) and rebound margin (2.7). Collectively, the stats show a team that stresses the fundamentals and plays gritty man-to-man defense.

It’s time to stop overlooking the Seawolves. Stony Brook’s next game is Saturday, Jan. 30 at Pritchard Gymnasium. The women play Hartford at 4 p.m. followed by the men’s game against Boston University at 7 p.m. The school is billing the doubleheader as a “Celebration of Basketball.” The teams will welcome back basketball alumni and salute 1,000 point scorers from the past.

Sophomore point guard Bryan Dougher may join that group someday. He has certainly energized the Seawolves the last two seasons. Even during slumps. His three-pointer with 1:08 left against Albany on Sunday broke a tie at 58 and snapped an 0-for-9 start for the guard.

It’s an infusion of young talent driving the Seawolves. Dougher is one of three sophomores in the starting rotation. And two more are the first subs off the bench.

“It’s been a great class,’’ Pikiell said. “I have the leading rebounder in the conference in Tommy Brenton. He’s been the leading rebounder since day one. The first game of his freshman year he had 16 rebounds. Bryan Dougher is one of the top five scorers in the league and he’s the best three-point shooter in the conference. And I have a big guy in the post in Dallis Joyner who is moving up to the league lead in double-doubles.”

Muhammad El-Amin is the lone senior. And Pikiell has more talent stocked on the roster. Freshman Marcus Rouse scored 17 points off the bench against Albany.

After years of frustration, miscalculation and misfires, Stony Brook men’s basketball matters. We’ll see how much at the America East Tournament from March 4-13 in Hartford. A big finish earns the Seawolves the ultimate reward – a berth in the NCAA Tournament.