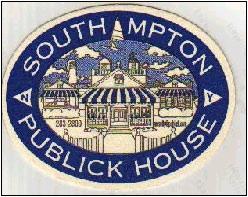 Once again the brewers at the Southampton Publick House have opened the
vaults and will be releasing very limited amounts of some highly special
beers.

Along with our year-round beers, we will be pouring draft versions of our
two 750mL “new release” beers, the Russian Imperial Stout and Trappist IPA.

Our weekend “Brewmasters Brunch” will be available, starting at 11:30 am.
We will also have a special cask beer on the bar for this day. Join us for
another extraordinary day on the east end of Long Island.

Brewmaster Phil Markowski will be on hand all day long, so bring your copy
of his book, Farmhouse Ales, to have him sign it. We will also have copies
on hand to purchase.”

I also read about a bus trip to the tasting, leaving from Big Z Beverage
in Huntington, but after talking with them, it’s been canceled.

Who’s down to hitchhike?