They give out well-deserved Academy Awards for art direction, cinematography and costume design, but you won’t get nominated if you light yourself on fire and jump off a ten-story building. Film editors, makeup artists and sound mixers—all are justifiably eligible for an Oscar each and every year. The guy you thought was Matt Damon who drove a speeding car off a dock? Well, maybe next time.

Movie stunt people are left out in the cold every Oscar season—despite high profile support from Hollywood luminaries like Arnold Schwarzenegger, Martin Scorsese, Steven Spielberg, and Robert De Niro. Even after the Emmy’s added an award for stunt coordinator, John Pavlik, the film academy’s director of communications, has stuck to the Oscars’ SOP: “The board acknowledges that many different groups of people are a vital part of the film making process but they just don’t want to hand out another Oscar.” 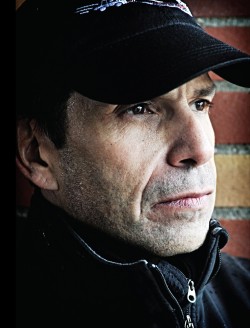 Veteran stunt man Manny Siverio sees the brush-off as a self-perpetuating cycle. Siverio, a 50-year-old New Yorker by way of Puerto Rico, thinks the Academy Awards have yet to properly acknowledge the stunt community’s contribution to the industry partly because those who take the cinematic spills are viewed more as thrill-seeking loonies than dedicated artists and well-trained specialists working with airtight precision.

“Just like set designers and wardrobe designers help make the look of the movie, stunt coordinators can help define or even create a new type of action genre,” says Siverio. As to why the Academy isn’t getting with the program, Siverio wonders, “Either they just don’t see the contribution we make or they’re buying into the image of us as ‘nuts’ or ‘cowboys.’”

While we’re on the topic of nuts, don’t ask Siverio about the “craziest thing he’s ever done.” Well, not unless you want a stern lecture on the inherent logic of ejecting oneself from a speeding car on a regular basis.
“My pet peeve—big time—is the whole ‘stunt people must be crazy’ belief,” he explains. “So when I’m asked about the craziest, most risky thing I’ve ever done, I don’t tell a story about falling off a building or setting myself on fire. No, I usually tell them it was the time I didn’t practice safe sex during a one-night stand. Now that’s crazy. This typically quiets them down long enough for me to explain what it’s really like to work in the stunt business.”

Don’t say I didn’t warn you…
In the same way Bob Dylan sang “to live outside the law, you must be honest,” the Academy board of governors doesn’t seem to realize that for a veteran movie stunt person like Siverio to defy the laws of gravity—and survive—he must be sane. Exceptionally sane. 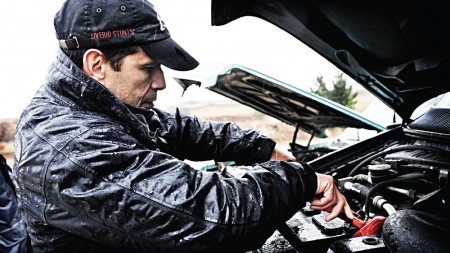 “I personally like coming back to work the next day in one piece,” Siverio says with a boyish grin. “I have no secret desire to be injured or hurt. I love the thrill and the adrenaline rush, and I have a pretty high tolerance to pain, but I don’t like pain and trust me, I avoid it whenever possible.”

Make no mistake about it: Manny Siverio is definitely not crazy. He’s a highly conditioned athlete and martial artist—and it takes incredible daily discipline to stay in stunt shape at any age. He’s a devoted father and husband (he and his wife Addie are accomplished salsa/mambo dancers). He’s a member of the DGA, SAG and AFTRA and is respected in the industry as stunt man, stunt coordinator and Second Unit Director for his professionalism and his enduring child-like enthusiasm.

But he’s still not gonna get an Oscar anytime soon.

It also doesn’t help Siverio’s ilk that the increasing use of CGI special effects gives audiences the impression that humans are no longer putting their butts on the line. “What’s ironic is that I do a lot of video games (e.g. Max Payne 2, The Warriors, Manhunt 1, etc.) using motion capture technology (or Mo-Cap, as it’s called in the business) and I can tell you they use actors and stunt people because no matter how complex a computer program is, it still can’t duplicate the natural movement of the human body,” Siverio says. “CGI in films and TV, on the other hand, has inspired stunt people to think outside the box. We’ve learned from it and collaborated between the two fields. CGI and stunts now work hand in hand and have created a new area in stunts called rigging and wire work.”

They may work hand in hand but only the special effects team will be wearing a tux on Oscar night.

The ever-resourceful stunt crowd created their own award in 2001. The Taurus World Stunt Awards hands out statues in categories like Best High Work, Best Fight, Hardest Hit and Best Action in a Foreign Film. Siverio, a man who’s blazed a path for fellow Hispanics in more TV shows, commercials, music videos, Broadway plays, video games and films than I could possibly list (over 350 as of this writing) took home a 2008 Best Fire Stunt Taurus for his scene in American Gangster. Such recognition is the result of hard work and—he’s quick to point out—a collective effort. 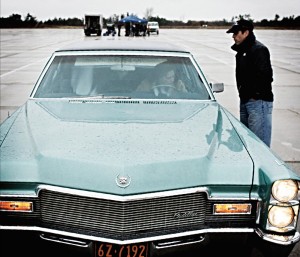 “I wouldn’t have been able to do the American Gangster fire scene,” he explains, “without the prep work of Brian Smrj, the guidance of stunt coordinator George Aguilar, and the support of stunt safety people like Jay Lynch, Jeff Ward and Steven Pope—standing behind camera ready to put me out when the shot was done or if I suddenly felt the need to bail.”

“During the filming of American Gangster, my wife was pregnant and I promised her I’d start doing less stunts and more coordinating,” Siverio says. “The night of the fire gag, I came home late with burns on my ear lobes and the ridge of my nose. It looked like I had cooked my skin. Literally. Fortunately, my wife was about to hit the sack and it was dark in the bedroom when I explained to her that I had worked ‘in front of the camera’ that day. She got very serious, asking me what I did. Calmly, I replied, ‘Well, let’s put it this way, honey, we no longer have to worry about the baby’s bedroom furniture.’”

“Hey, I love what I do,” concludes Siverio. “It’s the type of thing I’ve done ever since I was a kid and I think that both my teenage son and toddler son have the same IQ as me when it comes to doing gags. You can watch the three of us playing fight scenes, complete with sound effects. It’s fun and intense at the same time. I love the fact that I get paid to do something that I did for free as a child. The main difference is that we have bigger toys, it’s more dangerous, and I have a much larger playing field. I like to think of myself as sort of a Peter Pan. I never plan on getting old and will be doing something like this for the rest of my foreseeable life.”

But did Peter Pan ever win an Oscar?