Marques Colston is the reason Hofstra University should have never dropped its football program in December.

The 6-foot-4 NFL dark horse rose from the depths of the NFL draft (7th rd. 252nd overall in 2006) and became the fourth Hofstra alum to win the Super Bowl when his New Orleans Saints beat the Indianapolis Colts.

Media members and football fans say the Super Bowl victory was for the city of New Orleans because of the destruction and hardships left behind by that wench Katrina. And while that’s certainly the case, the Super Bowl is also a glistening reminder of what Hofstra’s football program is capable of producing. 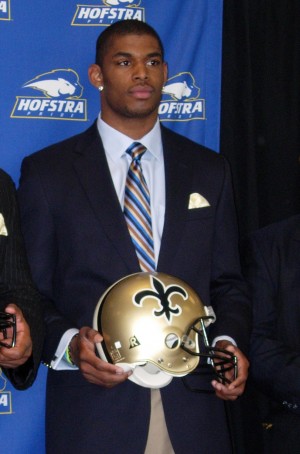 Last season Pride Nation was dealt a lucky hand when Willie Colon won the big game with Pittsburgh. People may not remember John Schmitt winning the title with the Jets in 1968 or even realize that Ricky Bryant was member of New England’s championship team in 2004, but everyone knows who Marques Colston is and what university he represents.

Perhaps the only people who don’t know or don’t care are those who made the decision to drop football at Long Island’s largest private university.

Colston’s seven receptions and 83 yards in Miami led the Saints in both categories. Like he has been for the last four seasons, Colston was a major target for Drew Brees once again. A quiet player, who would rather spend his off-season practicing with former teammates at Shuart Stadium in Hempstead than shoot Campbell’s Soup commercials with Donovan McNabb, Colston is everything right about the NFL and professional sports.

He doesn’t dance when he scores (he points to the sky to remember his father James, who died of a heart attack when he was 14). He has overcome multiple nagging injuries in his four professional seasons, and always bounces back strong because of his off-season conditioning program. He doesn’t refuse interviews with media members. He smiles when the camera is on him and he never forgets where he played college football.

I first met Marques at a press conference at Hofstra when we were both students there. The Saints drafted him the weekend before and I was there as sports editor of the Chronicle, the school’s student paper. I left him five messages the week before, wanting to speak with him briefly about his thoughts of possibly getting drafted. As soon as I came up to him after the press conference he apologized for not returning the calls and with a bright smile said he “just wanted stay low and off key. Anything you need from now on, just call.”

So, a year later I was writing a profile about him for another publication and called the Saints to speak with the NFL’s hottest young star. He caught 70 passes for over 1,000 yards his rookie season and finished second in Rookie of the Year voting. He called me the same week, we spoke and he remembered me from college.

We all have Hofstra to remember for what it is as an institution, but now, Pride Nation has another football memory to savor forever. Thanks, Marques.