Shante Evans may be the most heralded recruit in the history of Hofstra University. And midway through her freshman season, she’s playing like it.

The 6-foot forward from West Chester, Penn., has transformed the Pride women’s basketball team into a must-see attraction and lifted the program into the thick of the Colonial Athletic Association standings.

The high point came Thursday when Hofstra (14-11 overall, 7-6 CAA) downed then-first place Virginia Commonwealth, 74-66. The Pride has won six of its last nine, dating back to an overtime win over UNC-Wilmington on Jan. 17.

Evans is a rare game changer as a freshman, leading the team, averaging 13.4 points and 8.9 rebounds. She’s shooting 50 percent from the field and has collected more rebounds (223) and double-doubles (10) than anyone else in the CAA. 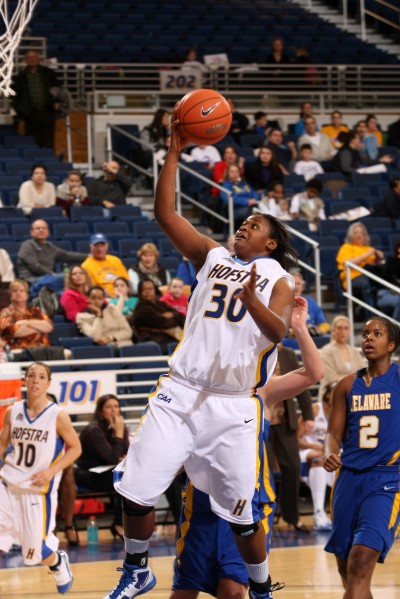 It’s no surprise. Evans, a 2,000-point scorer and shot put champion at Henderson High School, was the 54th rated prospect in the nation by ESPN, and on Kilburn-Steveskey’s radar since her sophomore year. That long courtship paid off when Evans chose the Pride over Seton Hall, West Virginia, Temple, Drexel, UMass and Penn State.

“Hofstra had everything I was looking for in a school. I was close to home, I loved the team and coaching staff and I would get a good education,” said Evans, who is majoring in physical therapy.

And she’s just what the fourth-year coach needed to help take the Pride to the next level. Hofstra, two seasons removed from a 20-loss campaign, went 16-14 a year ago and was upset in the first round of the CAA Tournament.

“Her actions speak more than anything I can say about her,” Kilburn-Steveskey said. “She’s the most coachable kid I’ve ever coached. Her eagerness to learn is one of her biggest attributes. She’ll review something on film and you’ll see her work on it that next day in practice or in a game. We haven’t even touched what her ability is going to be by the time she gets out of here.”

The Pride reached the WNIT in 2007, its first Division I postseason appearance. And with Evens already owning the low post and getting better by the day, Hofstra has the foundation laid for another postseason run.

“We are playing good basketball,” Evans said. “And on defense [we’re] causing problems for our opponents. I can say we are headed in right direction and we’re only going to get better.”

With five games remaining in the regular season, including a home date Thursday, Feb. 18 at 2 p.m. against George Mason, there’s still room for improvement. The Pride has already proven it can run with the pack. How long will it be before Hofstra leads from the front?